I had built my dive plan for a deeper dive before deciding whether I was dive fit following my decompression incident. During these months, I returned to dive fitness (on my own estimation) and at 10 months post accident felt my confidence and fitness levels were high enough to attempt a deep dive.

Once the date of the dive was agreed, support divers would need arranging and briefing and the dive tanks filling. The tanks alone for myself and fourteen support divers would take 3 full days to fill, and use almost 60 cubic metres of helium. The tanks were filled just two days before the dive; this (in hindsight) was too close as the process was stressful along with loading the dive boat during a squall that had recently blown in. I had insufficient sleep that night and would have made an excuse to postpone the dive had the weather not been decided that by providing gail force winds that day. 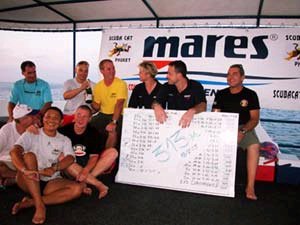 The team met early that morning, my feelings were not of confidence at all and I felt relief that the weather was simply undivable. Normally, I feel quite optimistic pre dive, but the sheer relief I felt of not going that morning was incredible. To postpone the dive was an expensive exercise for me, I could afford to fund one more attempt and then would shelve the project until I had saved enough to repeat the process. I had wanted to dive during a period of small tidal movement and the next window of opportunity was 2 weeks away and exactly 1 week before Christmas day. I did think of rescheduling until the new year as I did not relish the thought of Christmas Dinner in the recompression chamber and also the usual nagging doubts I kept having were taking there toll.

During the next few days, I felt like the storm clouds were passing in my mind, I started to feel as good as I would need to soon. The following week passed easily and I managed several practice dives in less than ideal conditions. The day before the dive I went to bed early mindful of the current windy conditions. I woke up to blue skies and calm seas and I felt as carefree as a 6 metre support diver!  The journey to the divesite was 4 hours of smooth seas and I felt absolute confidence, which helped to ease all the support divers anxieties and put the whole boat into business mode. 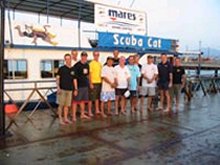 I dived in Phuket, Thailand – 35 miles offshore. The dive site was on the edge of the continental shelf at 450m+ depth. The drop line was weighted and marked every 1m. The tides were right the day of the dive, as was the weather. . The dive boat and rescue boat were courtesy of ScubaCat.com (where I’ve been working). The support divers were great, just as they were in February when they held me on the line during the 3 hours of convulsions and vomiting due to counter diffusion induced DCI. Medical support is great in Phuket with plenty of state run,good, inexpensive chambers. Phuket treats its divers seriously and you need never be more than a 1 hour journet from a chamber (our rescue boat had 900 petrol horsepower bolted to the back!). 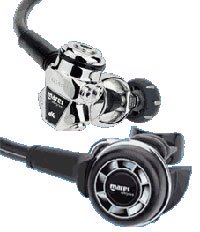 The regulators were chosen for there heavyweight, all-metal construction helping to maximise internal temperatures. The DFC system is great at managing high gas flows with its smooth operation as opposed to venturi flow support.  Finally, no environmental seal means less Intermediate pressure amplification with the ensuing high pressure seat instability etc. The water temp was 3-4 degrees celcius at depth, the gas flows were enormous but regulators provided zero free-flow or stutter.

The descent went very smoothly, the unusual currents would go down then up then get weaker then stronger, but mainly because of the slack tide window and neaps dive time, the tides didn’t have a detrimental effect. Once 180m depth came, it brought with it the darkness. Underwater lighting has come along way in the last year and its now possible to virtually guarantee operation to 300m (with the right lights of course!)

My head mounted lights shone onto the down line and every once in a while I would check my depth on the taped measurements against my depth gauges.

By 250m I still felt in charge, my lowish helium content added the sort of (couple of pints) confidence that would help avoid helium tremors and other HPNS symptoms. The water temperature was chilling, but my dry suit kept the icy water out, I noticed the shakes in my body and hands, but couldn’t really say whether it was the cold externally or internally or helium induced tremors. By 280m I started to grip the line tighter to slow down, I checked my back gas contents gauge and was not impressed by the figure! I had reached my gas turn around pressure by 300m. I didn’t seem overly concerned and this concerned me! I dropped to 310m and looked again at the gauge, 20 bar behind schedule and planned drop time exceeded by one minute. At this time I looked down and saw a ghost like image of some kind of large hydroid, I scanned my eyes from left to right to check for any visual abnormalities and to check the distance more exactly of my jelly like visitor.  The little checks I do told me that my concentration was sometimes stalling into a complacent mind lock and this set the narcosis alarm bells ringing. This hydroid looked on coarse to hit my descent line and looked over 2 metres in length! 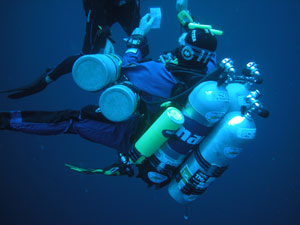 I checked the depth on the line, it was deep enough for today. I grabbed the line marker at 313m and headed for 249m the first deep stop. I shut my eyes and ascended hand over hand, not wanting to see the contents gauge. When using twin 20 litre tanks, you have a virtual inexhaustible supply, even when they equalise with the surrounding water pressure at 26 bar, you simply head up 5m and because of the huge volume, you can breath again and again.

The deeper stops came and went without drama, which was not surprising due to the slow ascent rate. The first gas switch was my only concern the rest would be easy. Because of the minimal time at depth, the risk was acceptable. The journey to the first support diver was uneventful (ish), I met Sveinung at 90m and he handed me a 15l of Trimix 14/56. Phil gave me a similar tank at 75m, as did Khun Gai at 60m. 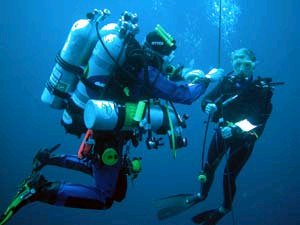 All the subsequent decompression tanks had the same helium content and a falling nitrogen value. By 10metres I had started to detect a shiver in my body, maybe due to the high helium content in my dry suit inflation gas. This dry suit gas helped me avoid skin bends caused again by another kind of counter diffusion. At 9m the long heliox stops began, and this was supplied from the surface through long regulator hoses. A real shock occurred about 2 hours later when the tank I was breathing was changed at the surface. I still had the regulator in place when I felt my tongue get sucked through the second stage and could see the hose collapsing to the surface due to the vacuum! I pulled my now much longer tongue free and cursed the topside monkeys. This was very unpleasant, but could have been much worse. A small communication break down I think!

During the stops, I ate fun size mars bars and banana pieces while the support divers were having their lunch. I knew this because of the chicken bones that were raining down around me. Small fish were closing in all of a sudden, to peck at all the goodies – I hoped a toilet flush wasn’t coming next. 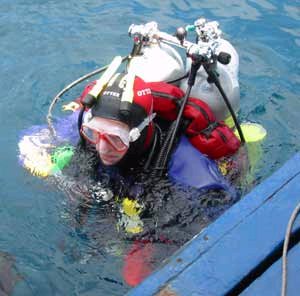 I got out of the water after 6 hours 36 minutes in it. I had got down deeper than any solo diver before me. I had surfaced under my own strength and more importantly without decompression illness. Although I was exhausted I was very happy.

Check Out This Innovative ‘Scuba Hunt’ Game In Cozumel