A First Look At The Pakpod

Almost everyone who has ever used a camera has, at one time or another, wish they had a tripod available. Sharing memories of our latest adventure is a big part of the thrill of pushing boundaries, going to places and doing things that few others ever will. With the explosion of rugged cameras designed to withstand almost anything we can dish out, we are able to capture those memories with ease….except when we need a tripod.

Pakpod is the new “ultimate adventure tripod” that goes where you need it. Created by Steve Underwood, the Pakpod, by Deep Blue Design, LLC, is a lightweight, rugged and extremely versatile mounting system. With a tripod, the photographer can be in the action at all times. The days of propping your GoPro camera up on a rock, watching the camera slip just as the self-timer counts down, or making a “jury-rigged” mount out of duct tape and a stick are past!

Traditional tripods fall into two, broad categories: the heavy-duty, three sectioned aluminum tripod that can hold a rhinoceros, or the tiny, table-top number that makes most cameras look like an elephant on a cocktail umbrella. Flimsy or heavy, that’s been the choice for decades.

The Pakpod is a game-changer. Weighing in at just 15.5 ounces (0.44 kg), the Pakpod will satisfy the most minimalist mountain climber. Completely waterproof, the Pakpod is the perfect platform for setting up underwater, using on an ice-climb in Valdez, or for leaving out all night at the jungle watering hole, looking for that once-in-a-lifetime shot of a South American jaguar. Whether it is rain, a freshwater lake or the ocean, the Pakpod‘s high-impact ABS plastic and stainless steel construction only needs a good rinse to be ready for your next adventure!

“Solo documentary work for water-focused nonprofits requires the wearing of many hats. Moments unfold unexpectedly and rapidly. I need to set up and lock down quickly in the spot that gets the shot. Shaky footage can destroy the hypnotic stillness of Nature. At the end of the day it’s the rock-solid clip that wins every time.” Steve Underwood

As divers, we have all missed amazing underwater shots because we couldn’t get close enough to our subjects. With a camera on self-timer mode, the Pakpod and camera can be set in place and the diver can back away, giving that octopus room to come out of its hole. With three independently adjustable arms, a camera can be mounted, one arm can be used as a handle and two strobes or lights can be attached to the other arms…for a lot less cost than traditional strobe mounts!

The Pakpod comes with a 1/4-20 threaded mount and threaded hole, allowing the use of any number of GoPro and other “Adventure camera” mounts to be quickly attached. The tripod legs, which can be be deployed asymmetrically, are also equipped with 12 mounting holes per leg, allowing a multitude of options to strap, bungee, zip-tie, lash and connect cameras and lights. Imaging you are setting up a camera to cover a Moray’s hidey-hole, but the only clear shot is from the side of the rock in front of the eel’s lair. By extending the legs independently and deploying the fold-away stakes, the photographer can adapt the Pakpod to almost any configuration…and provide a stable platform for the shot.

Each leg comes equipped with a wide, treaded base…which offers good purchase in sand and rugged surfaces. By unfolding the attached stakes, which can be independently set throughout a 290° range, the Pakpod can be securely planted.

Extending the legs to the Pakpod‘s full 17.75″ (45 cm) length makes a nifty “selfie stick” for those who like to be in the action. The legs collapse to an overall length of 12.75″ (32.4 cm), allowing the Pakpod to be carried almost anywhere.

While we recognize that no system is perfect; the Pakpod is a rugged, lightweight tool with a great deal of versatility. In testing during review, we subjected the Pakpod to a 24 hour immersion in the pool, being dragged (literally) through the sand and surf after it fell off the dive float it was supposed to be lashed to (operator error), and tied to a branch of a tree, in a vain attempt to catch a bird feeder-raiding raccoon in the act.

The construction is rugged, but it is not unbreakable. The maximum load with legs extended at 45° is 5.5 lbs (2.5 kg)…so the photographer wants to be careful to not overload it. The standard stakes are made of rugged ABS plastic, but they can break if torqued, and the points are sharp! Care must be taken to fold them away when not in use. Rubber rafts and sharp stakes are contraindicated. Photographers can also purchase the optional, aluminum stakes or, for safety, the Eco-green ABS stakes with rounded tips.

The Pakpod has a number of attachment points, but the photographer will need to be creative in supplying the right accessories. We used zip ties, small bungee cords, string, duct tape and binder clips liberally. 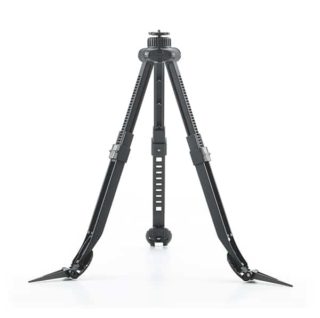 Attaching a GoPro or other similar camera securely requires purchasing a separate mount that can be threaded on. But having the versatility of a threaded mounting screw on one side of the knurled adjustment knob, and a threaded hole on the other did allow for a unique “over/under” camera and light setup. The on-board stakes are adjustable with any of the three hex-head/Phillips wrenches that stow under the folded stakes. These wrenches can be lost…which may be why three are provided.

The Pakpod floats. Now, if you are not a diver, this is a good thing…and if you are a diver and manage to lose your camera and Pakpod, it’s probably going to be heading toward the surface. For divers, if there isn’t a rock-strewn bottom or handy crevasse to stick a leg in, you will want to bring enough weight to keep the Pakpod in place. We suspended a two pound lead slider by a bungee to the center-point, and also experimented with using three, one pound soft weights as “sandbags” on the legs to keep it down; either setup worked fine.

After a week of testing, which included strapping the Pakpod to the front bumper of our truck and driving down the highway, and many hours of fun and games in the pool and the Atlantic, we came away impressed with the thought and design. In order to make it “stronger”, there would be a trade-off in weight. The same holds true to give the Pakpod more height or length. The treaded bases on the end of each leg could benefit from being independently adjustable…but that would also add one more “fail point”. We have all seen “over-engineered” gadgets that try to be the Swiss Army Knife of their field and don’t perform any task well.

So, the Pakpod fills a critical niche, providing a truly portable, rugged tripod that can be adapted to almost any situation. A hiker on the Appalachian Trail or a freediver in the Caribbean can easily carry a Pakpod without being hampered by it. Climbers, surfers, SCUBA divers, in fact, just about any adventurer can now carry a tripod with them. Limited only by their imagination and creativity, a photographer can have a stable platform for those critical shots.

Steve Underwood created a Kickstarter campaign to help fund the development and production of the Pakpod which ended on November 5, 2015.  You can see details of the campaign at https://www.kickstarter.com/projects/steveunderwood/pakpod-tripod-with-ninja-feet-for-smartphone-gopro.  The full product website is at: http://www.pakpod.com/

If you're on a dive boat operating off the USA, from now on you'll need to wear a mask to mitigate the spread of COVID-19.
Read more
Scuba Diving

A casting call has gone out for a new TV show. The producers are looking for individuals with a passion for sharks to join a new and exciting on-camera team.
Read more