Filmmaker Goh Iromoto’s excellent DVD of the 4th AIDA Freediving World Championships has raised the bar for documenting freediving competitions. Goh has taken the usual thirty-minute linear account of "what went down" and transformed it into a Hollywood-esque montage of stories and perspectives. And the soundtrack rocks! 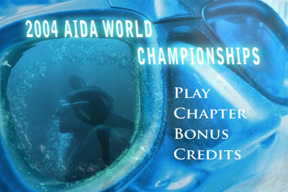 This DVD has got it all: great characters, a beautiful setting, drama and suspense, triumphs and misses, hilarity and titillation – all wound up in an epic narrative of North Pacific proportions. I wouldn’t really call this work a mere video. Watching it, I felt all the excitement and feeling of watching a real movie.

Producer Goh Iromoto was given the challenge of using his awesome ‘on-the-fly’ daily short clips to produce a unified narrative for the DVD, and at the same time offer new content for those who were already familiar with the shorts. He solved the problem by adding a few introductory scenes, athlete introductions, and extra footage for each chapter of the competition. There are new shots added within the shorts and some cleaning up of clips.

One of the best things about this DVD is how the constant weight competition is presented. You get to see close-up shots of the athletes on the surface (thanks to the rock steady vantage point from the barge), underwater shots from the surface video, mid-water scuba video and the bottom video. In previous freediving videos, constant weight is shown as an endless parade of freedivers who never surface, swimming up and down in a pale blue wash; in this DVD, there are continuity and an ever-changing point of view, close-ups, a variety of colors and hues and the emerald glow of Vancouver’s waters. 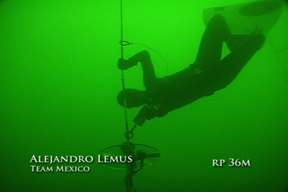 At one point, Goh retreats to the POV of the audience and media on the barge, who are watching the live feed, to give a non-sensational look at Ryuzo of Japan’s surface blackout from his 75m attempt.

I loved the spooky shots of the darkness and the descent lines disappearing in the abyss. There are also money shots of the deeper freedivers sinking into darkness, which to me has to be one of the most dramatic elements of constant weight. Sinking into darkness feels so good and it looks so eerie on television. The German team in particular looked like deep sea spelunkers with their mask-mounted lights piercing the darkness. 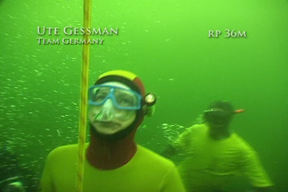 There are also some sequences that you have to see to believe, like the incredible shot of Patrick Preisig’s custom monofin ripping in half when he makes his turn at the bottom. Watch for the white crease across the middle of his fin as he makes his descent from the surface.

The humanity of this competition comes out on the DVD, especially in the last short when everyone says "Goodbye Vancouver" and AIDA judge Marcello does an impression of the philosopher judge with his "see you later… maybe… someday, I don’t know” smile and ironic shrug routine. 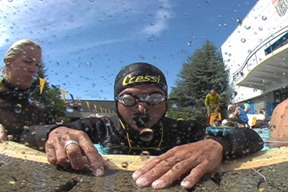 This World Championships was cozy. Not quite as big as the previous one or even a few AIDA World Cup competitions, a few important teams are absent, but lasting fellowship emerged amid the salt, the chlorine and the tequila. Goh Iromoto peppers the movie with clips of freedivers, veterans and newbies, volunteers, organizers, and media (our own Publisher Stephan Whelan makes a guest appearance) telling their own stories about the Worlds, including several clips not in the online shorts.

A DVD would not be complete with extras and bonus footage. Goh offers four bonus clips, including the excellent CAFA promotional video (his first project), static apnea training with the "Kirk Cam," and two scenes with antics between the clowns of the competition, the ever-smiling Yehia Safwat and the amazing and incredible Kaz Ichikawa.

In addition, there’s Tom Sietas 9’24" static apnea for those of you who were not there to witness this amazing performance and then the credits – an impressive roll call of all the people who made this event possible.

This DVD documents a successful competition and shows how it can be done in the future. Order it from CAFA here.