The best laid plans of mice and men….

Karl and I are prepared to make a four-cylinder dive to Cenote Coati Mundi (Named after a lovely little raccoon like animal native to these parts.  Of course, this particular one tried to eat the shorts of a previous expedition member.) underwater while Terrence and Renee chop and cut their way to it over land (The same cenote they tried to find yesterday).  Karl is carrying a canister with a small GPS and radio in it.  Good plan.  Too bad it did not happen.  We found out that there is line in the system that was not yet placed on the map.  So, what should have been a simple swim turned into an exercise of following good cave diving training.

One of the interesting things that happens on expedition is you become attached to outcomes.  You tell yourself to let it go and not to have any, but it is natural that you develop expectations.  Part of doing well when you are seeking to find answers to questions posed by the cave is to rely on your training and experience.  Today, Karl did just that.  We went in with an agenda to meet Terrence and Renee at the cenote, so we could help them cut to it.  When we were at the end of our available gas to continue moving forward in the cave, Karl turned the dive.  It is a simple process of giving the command signal of a thumb’s up.  I had only one answer, the matching signal.

We could have easily been pushed to see if we could go just a bit further.  However, that would have been a mistake.  Because we were not where we believed we should have been.  It is not uncommon for ongoing expeditions to have many new areas of cave working at once.  We happened to find a piece of cave that has surveyed line in it that had not been tied into the map yet.  This sent Karl and I off to portions of the cave well away from Coati Mundi.  As we turned the dive, I had begun to realize that things were not adding up, but if we had not stuck to our training and went just a little further we very well could have been in trouble.

Lessons learned come in so many ways.  Even as experienced cave divers, there is always a line between making a goal and having the discipline to turn for home when the time calls for it.  Sometimes the turn for home is by design, sometimes that turn is because your training demands it, sometimes it is really difficult because you are in big cave with the line going, and sometimes it is simply because something does not feel right.  We turned because our training demanded it.  We realize that goals and gains are not made in one day.  Sometimes, they can take decades.  Besides, often when dives do not go as planned other things are learned.

We learned that there is line in the cave that we need to tie in.  We also learned that sometimes a compass could be useful for checking direction in the cave even when you are positive you know where you are going.  Also, we re-enforced that we are disciplined enough to turn for home even when we may not want to.  Of course, we would like to believe we would have no doubt in that, but when seen in the heat of the moment it further confirms the commitment to follow the protocols we all agree to dive by.  All the rules in the world are only as good as their application.  Great training and experience are only as good as the last time they were used.  In the moment, it only matters if it is applied.

There is certainly a long list of those who have not necessarily applied what they knew to be the best thing to do.  Some have paid dearly for it.  Complacency and thinking that the rules do not apply to you is a recipe for disaster.  Doing the correct thing is not always as easy as people think it is.  Certainly, history bores that out.

Of course, a passing thought goes through the mind about what Terrence and Renee must be thinking when we have not shown up when we said we would.  Well, they either think we are dead or turned the dive.  Hopefully it is the latter.

We made our way back the way we had come picking up the stages we had placed.   We surfaced to be greeted by other divers.  They had just finished a dive in the same cenote we had.  We had been in for a while.   They were even nice enough to help carry a few cylinders back up the trail for us.  The hospitality of people involved in diving never ceases to amaze me.  We had a nice chat about the different areas of the cave each team dived in.

We let Terrence and Renee know via radio that we were still alive.  I believe it was a chorus of I Love Rock n Roll or something of that nature.  Turns out they had found the cenote without our assistance.  The GPS had taken them right to it.  Amazing what can happen when everyone is speaking the same language.  They had actually cut straight in line with the cenote the day before, but had actually stopped short.

So, win some (trail cut to Cenote Coati Mundi), lose some (did not swim there underground).

On the way home we were lucky enough to speak to the folks at Aktun Chen.  It is a dry cave area near Villas DeRosa.  They have arranged for the high school class arriving next week to survey and map a dry cave that they do not allow people access to normally.  Aktun Chen has no map of the area.  So, the students will have an incredible opportunity to do actual science and produce a working map. 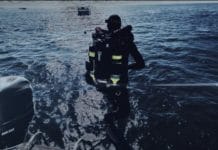