An unusual day for the PFI team.

The athletes had a much needed day off yesterday. So, what do world class freedivers do in their spare time? They go diving!

It looked like the hotel freediver by 10am at CobaltCoast. I sat under an umbrella and watched as they made their way to the pool for a static session or pass the pool altogether and walk directly to the ocean. Everybody around here seems to need some diversion and what better way to divert than by diving on the reefs here in Grand Cayman. Doc swam out to the reef early in the morning only to return a couple hours later, eat a Turkey sandwich and swim right back out again. He has his priorities.

Mandy and Kirk did some underwater sight seeing in the morning as well. Kirk dried off for a couple hours and then turned right back around and accompanied Martin out to the wall to help him with negative pressure dives. Ah, the life of a trainer. With all that diving yesterday you would think that team PFI would be too tired to perform today.

The boat left the dock a little later than normal. “Off The Wall Divers”, Captain Danny and the crew all leave together to anchor and set up the lines while the rest of us leave on Tenata. The wind was blowing again today so we shuttled everybody by van to WestBay dock. By the time we were ready to tie off to Danny they had decided to haul up the lines due to strong currents. We finally found a blue “spot” that seemed to work fine but, it cost us some time. 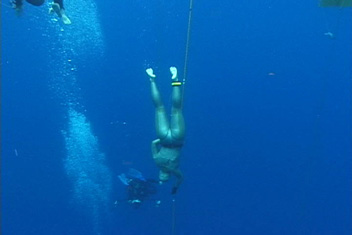 Underneath that girlish grin of Mandy-Rae Cruickshank lies a steadfast competitor who chooses herself as her biggest foe. So, it was no surprise when, just a few days ago, she reached high for the FI record at 76 meters. Falling short didn’t stop her though. Despite the uncooperative conditions today Mandy-Rae decided to back off a couple meters and try for 74. It was a good move on her part. When we watched the surface video back at the room it looked like Martins game day in Cyprus in 2003. White caps and waves splashing against the boat. It was sloppy. Good thing for Mandy the last thing she sees is Kirk or Danny filling up her fluid goggles. 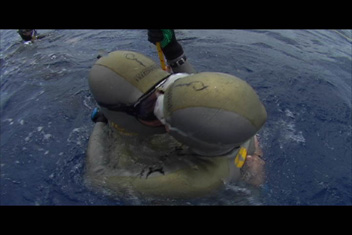 According to Mandy her dive was a little “unusual” today. We had a few newbie safety divers and they didn’t know that she likes to hear them cheer her on. So Mandy took 2:45 to dive all 74 meters in an eerie silence. No cheering or "Go Mandy!". Just silence. Possibly the world’s most quiet world record! Is there a record for that? 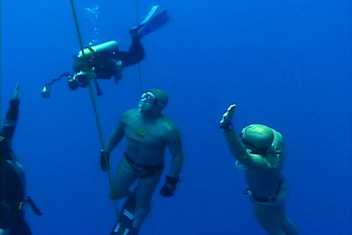 There was another unusual happening in the PFI camp today. For the last few days Doc Lopez has been knocking off his own records in Variable Ballast. Set a National record today and break it the next. On his most recent ride on “The Beast” he found out that the safety line is not so safe. It seems that, due to strong currents, the safety line crossed with the sled line very close to the bottom. Two of the divers tried to undo the line but had to duck out of the way so they didn’t get hit. The lines slowed the sled down but it managed to push its way to the bottom. Doc made a safe return to the surface with a total dive time of 1:36 to reach a new U.S. National record of 59 meters in Variable Ballast. There will be some minor changes to the lines that hopefully will end the problem.

To add to the peculiarity of Doc dive Swedish AIDA International Judge Bill Stromberg had the unusual privilege of handing out a record to an up and coming “New Kid On The Block” that surpassed his own National Variable Ballast record. There will be some good natured teasing for the next few days I’m sure. 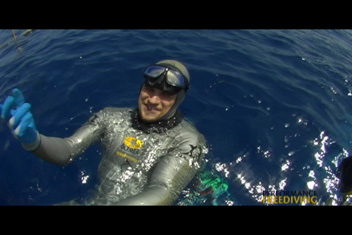 The final dive of the day was for Martin Stepanek. His most recent record attempt garnered him the World Record in CNF at 80 meters. That particular record was the largest increase in depth by any man in the history of freediving. There should be a record for that! Although today’s dive was for training purposes only that didn’t hold him back. Martin has been working hard on his chest flexibility in order to make the most of his next record attempt in Variable Ballast. Yesterdays negative pressure shore dives should be a testament to that. 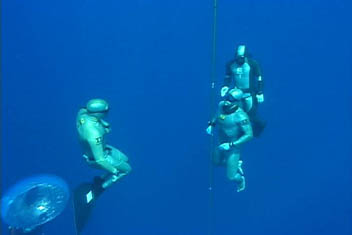 Around 12:30 pm today the lines were set at a 130 meters in preparation for his dive. The sea had whipped itself up into an oceanic froth that had some of the people on board Tenata a little queasy. When it came time to pull the snap shackle Martin was ready. Within 3:38 seconds he had completed his dive with a clean performance. His next ride will be for the record in just two days. Tomorrow is an off day for the PFI team. As for me, I am not sure what I’m going to do. Hey, wait! I think I’ll go diving!