A prehistoric "Jaws" that roamed the seas 400 million years ago had the most powerful bite of any living fish.

The extinct fish Dunkleosteus terrelli could bring its jaws together with a remarkable force of 5,000kg (11,000lbs). 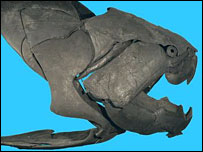 Its bite force was double that of a large great white shark putting it up with the most powerful biters ever, such as Tyrannosaurus rex.

The ancient sea monster’s teeth focused the bite force into a small area – the fang tip – at an incredible force of 5,625kg per sq cm (80,000 pounds per sq inch).

Even more surprising is the fact that Dunkleosteus could also open its mouth very quickly – in just one fiftieth of a second – which created a strong suction force, pulling fast prey into its mouth.