Looks like I have managed to convince some of my fellow Greek freedivers, that international competitions are great fun. At least that’s what I thought at first, when Panagiota Balanou, one of the top freediving girls in Greece suggested that some of us compete at the “7th Berlin Master Cup”. She then told us that her parents live in Berlin and that we could stay with them. She also added that flights with Easyjet were cheap. Hmm! So much for believing that I actually inspired people to compete at international events!!

The weather in Berlin was cold. Some friends back in Bristol used to call me a “mouse”, but seriously, Berlin was cold. Four of us arrived at the airport a couple of days before the competition: Panagiota, Natassa, Giannis and myself. The Balanou family provided some very appreciated hospitality, including generous portions of Greek food!

This was an indoor competition that started at 5:00 pm. All athletes arrived a little early in order to register and hand in medicals etc. It was a nice opportunity to see some familiar faces from past competitions and meet some people who I only knew by name. The funny part was when I got in a conversation with Karsten Schneider who was kind enough to pretend to know who I was. I was sure some other German set the whole thing up. And I was very disappointed not to see the Deepest Bear. Too bad, I had a hot gift for him!

Static apnea took place at the small pool, since the main pool was busy at the time. There were three official zones, each one with a judge, an assistant judge, a safety diver and a cameraman. Thanks to the fact that Tom Sietas and Herbert Nitsch were not present, no one was really sure who was going to win. When static apnea started, I met and got in a conversation with Wolfram Neugebauer. We talked about what we were going to do. He had announced 6:30 in static apnea and 25m in dynamic. I was honestly surprised when he told me that he thought I was the favorite for this competition. I couldn’t believe it! Were the Germans playing a practical joke on me? I simply replied, “No man, YOU are the favorite”. I mean the guy was planning to do more than 6:30 in static…. 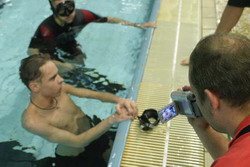 Turns out Wolfram did 6:56. Olivier Haug was just 10 seconds behind him with 6:46. I managed to take third place in static with a 6:18. The girls did very well. Christina Schon pulled a 6:06 in her first ever competition!!! Joanna Massacand managed 5:20 and Claudia Rollero was just behind her with 5:16. Panagiota Balanou managed 5:01, a new Greek national record.

I was disappointed when Kars van Kouwen did only 6:13. Turned out he had a very hard time traveling to Berlin, missed the train, lack of sleep etc. Veronica Dittes managed to do 5:42 but was disqualified. She told me she forgot to give the ok to the judges, a mistake she won’t repeat in the future! There were a total of nine disqualifications for LMC/BO. Fragouli did only 4:07 and Giannopoulos came up at 4:35 (we should kick them out of the country!). 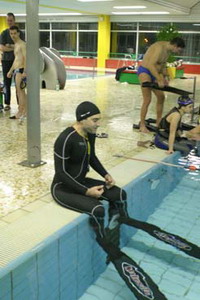 After a short break, dynamic apnea started in the main 50m pool. I had announced 125m and I was surprised to see that my official top was just two minutes before midnight, at 23:58! I managed to relax for a while, listening to my mp3 player and then decided to get up and see what’s happening. Wolfram approached me and said “It’s over for me Panos!”. He explained that he over packed and managed to loose control and get disqualified. We had some laughs about it and he said “See? I told you, YOU are the favorite!”. It then occurred to me that I actually had a chance to win this competition. I had some time before my official top so I spent a little time at the side of the pool. I gave my “back weight” to Katja Kedenburg who had announced 60m without fins, exactly the same as Natassa Fragouli. And what a coincidence, they started at the same time and both did exactly 66m without fins. For Natassa it was a new Greek national record. I watched Kars van Kouwen do 91m without fins and Giannis 105m with his monofin. Panagiota managed 85m earlier. So in dynamic we had done well so far as a “team”. My turn came up and I decided (like always) to do my best. I finished my stretching and I was ready to go. I started but got a little tired at around 100m. I turned and came up at 132m with plenty of lactic acid in my legs. I knew this was not the best time in my training phase for a max dynamic so I can’t complain. After all, with this dynamic I actually came first in dynamic and overall. Peter Colat did 128m and secured 2nd place overall, while Jonas Krahn and Glen Vengaus with 128m and 106m respectively, gathered an equal amount of total points and shared 3rd place overall. For the women, Claudia Rollero took first place overall with 114m in dynamic, Joanna Massacard (2nd overall) did 96m, Panagiota Balanou took 3rd place. Seven athletes were disqualified for LMC/BO in dynamic apnea, including Olivier Haug, who had second place in static and Christina Schon who had first place in women’s static. The detailed results can be found at:

The competition ended with a very nice dinner back at the organizers headquarters. Thank you! 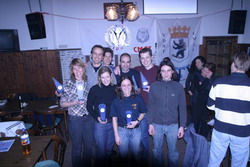 Dimitri Kollias, a good friend of mine, enjoys quoting Enzo from the Big Blue every now and then. A few days after our return, we were gathered for an AIDA Hellas seminar. When it was over, he approached me, put his hand on my shoulder, winked and smiling he said, “My friend! I knew it, I knew it”.

Now I have to forget the whole thing and concentrate for my next competition, one I’m also organizing. The AIDA Hellas 2005 Winter Apnea Games (shameless plug!). But this time I know I won’t win. Tom is coming and perhaps…