Purpose. Perseverance. Positivity. These are just a few of the words that come to mind when describing Jonathan Sunnex, a world-class freediver & instructor who has made the Caribbean island of Dominica his home. Affectionately known as “Jono” or “Johnny” by his mates, friends, and students — the native New Zealander has always had an eye for talent and a vision for success, both for himself and for others.

In 2011 Sunnex decided to pursue freediving wholeheartedly, and since that time the 34-year-old has garnered many achievements — he is one of handful of people who can boast diving on breath-hold to 110 meters deep; he is an instructor trainer at the highest level of the sport & the Safety Officer for AIDA International; he has been designated as the Chief of Safety for the world’s premier freediving events (Vertical Blue/Big Blue/World Championships et al), and he has coached over 50 individual athletes to as many national records and even myriad world records. In an heroic and selfless gesture earlier this summer he saved the CMAS World Championships in Kas, Turkey even though he was not a part of the organization; true to himself he wanted to ensure all of the freedivers had the safest opportunity to perform to their maximum and to share his expertise for their benefit. But perhaps his most spectacular achievement has been the way he has brought hope and help to so many people in Dominica after hurricane Maria nearly destroyed the island in the fall of 2017. Johnny initially came to Dominica to run a diving workshop, when he discovered the absolute perfect location for freediving in the southwest corner of the “Nature Island” — Soufriere Bay. No waves, no current, no depth limit: Soufriere Bay had all of this to offer and so much more. So Johnny and his life partner, Colombian athlete, and former world record holder, Sofia Gomez Uribe created their own freediving school and the Blue Element Freediving Competition. In 2016 they moved to a charming bayside village called Scotts Head and after hosting a few training camps they decided to launch their inaugural international competitive event.

By all accounts, Blue Element 2016 was a smashing success and plans for the event in 2017 were ready to roll. But then the worst natural disaster in the history of the island nation hit – Hurricane Maria.

Maria wrought catastrophic damage to the entirety of Dominica, which suffered an island-wide communication blackout. Much of the housing stock and infrastructure were left beyond repair, while the island’s lush vegetation was practically eradicated. An estimated 65 people were killed and the economic losses across the island totaled 1.37 billion. As for Soufriere and Scotts Head, they were literally cut-off from any national aid and so Johnny and Sofia jumped in to assist.

Stranded in Miami because their flights home to Dominica were canceled, Johnny & Sofia set their sights on fundraising and humor. Instead of sinking into a feeling of remote helplessness the industrious pair set up an online fundraising campaign dedicated to providing aid for their neighbors in Soufriere & Scotts Head. To increase awareness and spur donations Johnny pledged to cut off his long, curly locks – a risky move if you ask Sampson, but one that paid off in the end as the campaign received over $27,000.00 which was given in entirety to the two villages to fund the purchase of critical supplies (generators, water purification systems, food) and first-aid. Eventually, Johnny himself was able to fly out of Miami to a neighboring island and requisition a boat so he could bring the much-needed supplies to the families who desperately needed them. The positive, purpose-driven personality of Sunnex was on full display. In the aftermath of the storm, when his home was lost, the dive platform he fabricated from scratch and other essential equipment totally destroyed, Johnny persevered. He stayed on the island to dig out, clean up and re-build along with other friends and freedivers. Fast forward to one full year later and the island’s greenery has started to rebound, spirits are recovering, Sunnex relocated to Soufriere and the 2nd edition of the Blue Element Freediving Competition returned in full swing.

It may have taken an extra 12 months for Johnny to organize the second edition of #BlueElement but his perseverance proved to be well worth it. Blue Element 2018 realized nearly 100 performances from 22 different athletes, representing 14 different countries, who handily delivered over 20 new national records.

Moreover, Sunnex is buoying up the local economy. Bringing students and athletes from every corner of the planet to Dominica is an economic boon. Forging new relationships with local businesses such as the Soufriere Guest House (where all of the BE staff and most of the athletes stayed), Nature Island Dive (where competitors & crew met every morning and bought coffee every afternoon!) and Extreme Dominica (which supplied more terrestrial adventures) Sunnex again deploys his influence to benefit others. Johnny also brought back partners like the Discover Dominica Authority and he expanded everyone’s bellies vis a vis the cooking repertoire of Joan & Jemma Lewis, two fantastic local chefs (and sisters) who worked tirelessly to provide delicious & nutritious meals every day (lunch and dinner) for everyone.

An idyllic seaside hamlet in southwest Dominica has regained its footing – providing the perfect canvas for Johnny’s vision.

“Freediving is not just a sport to me, it’s a way of life. It has given me so much, taken me to places I never would have imagined. This is what I want to share. The underwater world is a gift and the only way to truly appreciate it is on one breath.” 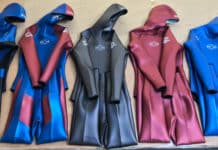 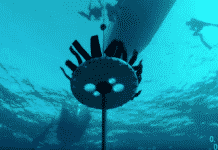 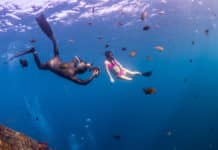