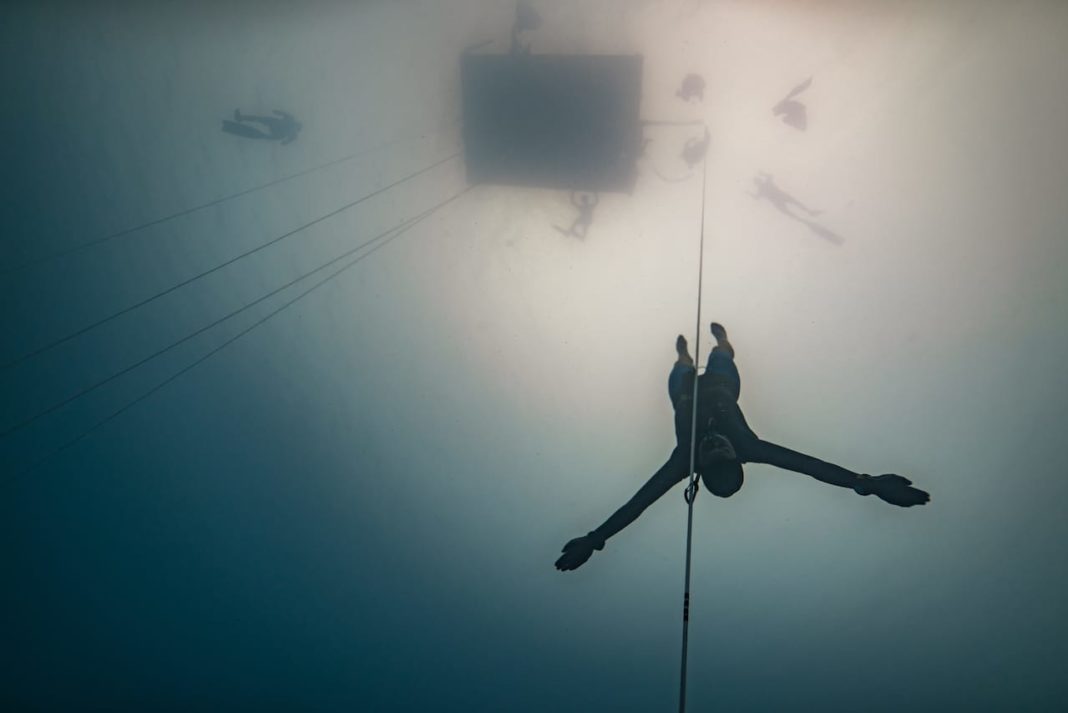 The first day of the Blue Element Freediving Competition in Dominica was an inaugural success. 12 divers stepped onto the platform and dove into the calm Caribbean sea to find out what was in store for them. Despite the occasional rain shower and a cloudy sky, the event kicked into positive gear very quickly with a white card performance and a personal best from the very first diver, Sun Young Kim of Korea. Thereafter, the judges seemed to be holding up mostly white cards which is what everyone likes to see.

Representing Barbados for the first time at an AIDA International freediving competition, the day saw Johanna Loch-Allen handily finish a clean free immersion dive to 45 meters in one minute and :48 seconds time to garner her and her country their first national record.

“I’ve never done this before!” exclaimed “Hanna” after her dive. “I wasn’t sure what the bottom plate would look like at depth so initially I descend a bit past it, but then I was able to grab a tag and make my return ascent. My dive was overall very chill. I am extremely proud to be the first Bajan to take home a national title.”

The second national record of the day fell to Sophie Jacquin of France, (who lives and freedives in Guadaloupe of the Lesser Antilles, also in the Caribbean). With her clean performance, Sophie continues a no-fins volley of titles between herself and the previous French record holder, Aurore Asso. Sophie’s record-setting 55m no-fins dive took two minutes and :20 seconds to complete.

“I am so happy!” quipped an exuberant Sophie as she swam over to the dive platform post-performance. “I was so nervous in my warm up and before the dive, but then once I began to descend the nerves disappeared and I felt strong. I’d like to thank my dive club in Guadaloupe and Carol for all of their support.”

By the end of the first session, and after the official judge review, out of the 12 performances there were eight white cards, three yellow and only one red. AIDA President Carla Hanson, had this to say

“The athletes, the crew and the safeties were all very well-prepared, today. The Blue Element organization made sure there was a stress-free zone to make the athletes comfortable before their dives, and that is what is most important to me — the safety & well-being of the athletes — so I think day one has been a great success. That and the seas here are so warm and calm – they make for perfect conditions.”

Stay tuned for more great diving as there are five more dive days to go in the comp.

Drawing on its past 20 years of experience, Fourth Element this week unveiled a new freediving wetsuit collection.
Read more
Freediving

We took a closer look at Fourth Element's brand new RF1 Freediving wetsuit and how it performs in Taiwan's deepest pool.
Read more

US Ocean Exploration Advisory Board to Meet In April