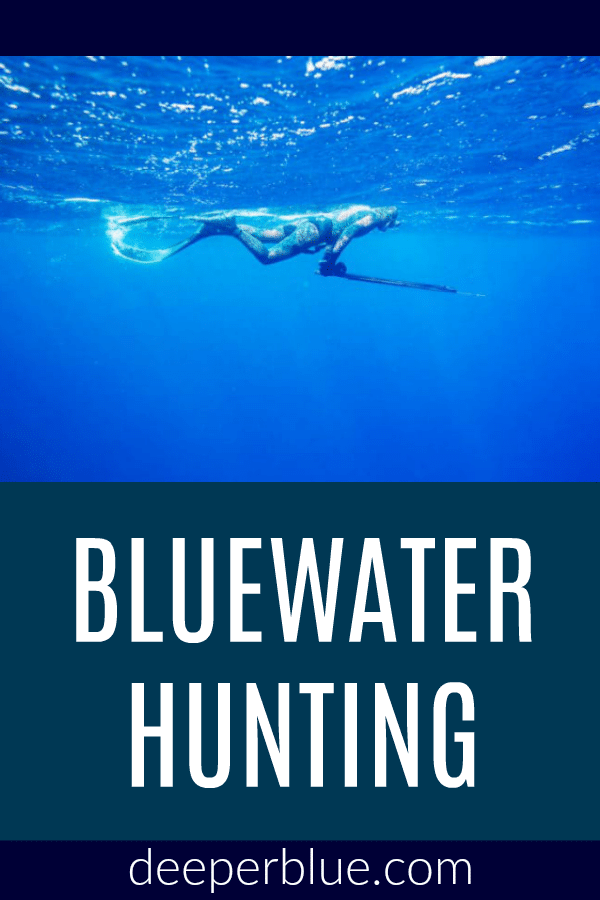 Bluewater Hunting is the ultimate challenge for freediving spearos. It’s about shooting the biggest, toughest, hardest to find fish anywhere on the planet! Bluewaterspearfishing is plunging into the open ocean, without anything for cover, with huge spearguns and a mess of terminal gear attached, attempting to shoot big underwater game, while avoiding entanglement, and keeping both eyes open for predators!

I’ve made a few trips southwest of Venice, Louisiana, hoping for schools of yellowfin tuna and wahoo. There is a salt dome there called the Midnight Lump which is famous for bluewater fish, and the 550 lbs mako sharks that feed on them. The Lump rises from 400 to 600 feet bottom depths, up to about 200 feet, and is also near the Mississippi Canyon with depths over 1,000 feet. But for me the blue water and bluewater fish didn’t show up and left us with a creepy green 6-feet of visibility, so we moved east to dive on oil rigs, with better visibility, but still green water. On subsequent trips to Louisiana and Texas, we also concentrated on deeper oil rigs and shrimp boat wrecks, which have what I call Bluewater Lite Spearfishing, a topic for a little later.

So what fish are considered bluewater species? It gets a little muddy here, so I’ll say there are two spearfishing records organizations that keep track of bluewater fish. The International Bluewater Spearfishing Records Committee (IBSRC), which lists Albacore, Amberjack, Almaco Jack, Swordfish, Cobia, Dolphinfish, Marlins, Mackerels, Sailfish, Trevallys, Tunas, Wahoo, Yellowtail, and Yellowtail Kingfish. And the International Underwater Spearfishing Association (IUSA), which keeps track of all freedive spearfishing records, including all the above, and also Crevalle Jack, Yellow Jack, Horse-Eye Jack, Permit, African Pompano, Black blotch Pompano, and Roosterfish. The IUSA does not specify which of their records are bluewater species, so these are my picks. The largest of all the above-listed fish, a Blue Marlin, was speared in Brazil in 2006 with a massive speargun and weighed 664 lbs / 301.2 kg. Interestingly, the largest fish overall, and now a protected species, a Goliath Grouper, which are found on reefs and wrecks, and was speared in the USA in 1949, with a primitive Hawaiian sling, and weighed 804 lbs / 364.7 kg.

Where you live and dive can limit the diversity of fish you will have the opportunity to shoot. For instance, spending 40 years diving the Gulf of Mexico, I have shot many big amberjacks, yellow jacks, a few almaco jacks, crevalle jacks, lots of big cobia, permit, kingfish & Spanish mackerel, and one wahoo, which I lost. I also switched to shooting video cameras most of the time while freediving in SE Florida and the Caribbean. Bluewater hunting will definitely require extensive travel.

Of all spearfishing methods, bluewater hunting requires the most gear, and it’s big, complex, and intense for spearing large powerful fish. Oddly using it may require little freediving ability or hunting knowledge. By comparison Reef Hunting, Wreck Hunting, Rig Hunting, and a few other hunting styles will likely use smaller, less complicated equipment, but often require more advanced diving ability, and much more spearfishing skill and knowledge. For those reasons, dive clubs in Louisiana back in the early 2000s did not allow float lines or reels in the “Skin Diving” categories of their rodeos. Skin diving spearfishing meant to hold your breath, shoot and go for a ride! After listening to their freediving member’s safety concerns, they first allowed reels, and eventually created a category for Bluewater gear. Bluewater spearfishing’s extensive gear can also be very dangerous, requiring much knowledge and experience.

It was my good fortune to manage and work “hands on” in the largest spearfishing store & shop in the continental USA for the last 3 years, during this rapid growth period for bluewater spearfishing equipment.  Here’s a run-down on the latest gear.

Bluewater spearguns are usually mid-handle design because 59” / 150cm to 68” / 183cm guns need the maneuvering ability rear handle models lack. One downside of the gun butt being moved back from an arms-length distance, to just a few inches from the shooter’s nose, is that recoil has bashed many unsuspecting divers in the face.

The shaft runs all the way back to a heavy-duty mechanism, just in front of the butt, and with lengths up to 72” / 183cm, and diameters of 11/32” / 8.7mm or 3/8” / 9.5mm, it provides ample knock-down power! Attached with 5/16”/ 24 threading for strength, is a nearly 6” slip-tip, built to blow through & toggle, holding onto the prey, with 750 lbs SS cable or 1000 lbs spectra line on a tandem slide-ring. A shooting line, also of HD cable or spectra, is crimped directly to the shaft fin, and it all fires away from the instant the trigger is squeezed.

“Chickk”  – the fish is shot & out of sight – you hold only an empty, very buoyant gun – a float line rushes by your side – it doesn’t snag on your gun, your arm, your weight belt, your leg, or your fin – second 1 is over!

As you kick to the surface you realize how lucky you are after your first bluewater shot. Hopefully, your fish stays on, tires and bleeds out quickly. You swim an arm’s length from the float line and try to and catch your breath, and hope your float gear does its job.

The float line deploys when the bungee break-away detaches from the gun’s line release, in the same instant the trigger is squeezed. Float lines are most commonly made of foam coated polypropylene line, vinyl coated nylon or spectra core line, or spectra fusion polyethylene coated lines, usually 75’ / 23m to 120’ / 37m in length. They are made to be tough, tangle free, low drag and mildly buoyant, because the diver has to dive down with them attached to the gun. They also have SS tuna clip(s) and swivels to attach them to the shooting line and to the bungee and finally to the float or floats. Bungees are used to allow stretch to keep the fish from tearing off the spear. Some float lines have bungees wrapped around a nylon or spectra core, that stretch up to 2.5 times their length. Other float lines are not stretchy but are very durable, and they attach to a bungee with an internal core line, between them and the float(s). These bungees usually run from about 10ft / 3 m to 33ft / 10m. My float line is 80’ / 24m, and my bungee is 20’ / 6m, for a total length of 100’ / 30m… so I dive to 80’ / 24m maximum, about 25% of the total length. It’s also a good idea to not cross float lines with a buddy. Another floatline technique can help you to descend more easily. Choke up on it by about 20% to 25%, towing a loop of about 20’ / 24m, and dropping it just before you dive, so it won’t be dragging on you while you are at your most buoyant stage of the descent, and especially in currents or rough waters.

Most floats are either hard, soft, inflatable or pressurized. Hard floats are usually less expensive, smaller, with low lift, and don’t travel well. Soft floats, like boat fenders, can be bigger, with more lift, but they don’t travel well either. Inflatable floats that fill to ambient surface pressure, travel well, don’t cost a lot, but they compress fast, so at 33’ / 10m they have lost 1/2 their lift, or at 66’ / 20m the lift is 2/3 gone. The best floats today for serious bluewater hunters are pressurized to 3atm absolute, so at 66’ / 20m they haven’t lost any of their large lift capacity, approx. 97 lbs / 44 kg, and below 100’ / 30m they are still very buoyant. They also deflate and travel very well. Two or three of these floats rigged consecutively are almost unbeatable!

One last piece of gear is a second gun, for the second shot, once you’ve pulled the fish up to your depth range. Fish sometimes make another run when they feel a lot of pressure change, which happens when rising to 66’ / 20m or shallower. A good gun with a reel, which you probably already own, is great for this purpose. You need to take your time and make a kill shot because it can otherwise get very tangled up.

So, what is Bluewater Lite Spearfishing? I can shoot some big AJs, cobia, kingfish, mahi-mahi, African pompano or permit right here in South Florida, above wrecks, sinkholes and around towers. You may also have good sized bluewater fish near you as well. My 57” / 145cm mid-handle gun with a 5/16” / 8mm shaft, 5/16” / 24 threaded slip-tip, HD shooting line rigged to a strong float line and bungee, and one 3 atm float, will definitely do the trick! Shoots Great – Less Budget Filling!

By the way check out some of the new IUSA bluewater fish records, shot with primitive polespears and slings. It’s amazing how float lines and reels can be attached to simple spears!

The Boston Sea Rovers have announced that their annual event has moved from spring to fall dates for the foreseeable future.
Read more

Episode 18: Exploring the Underwater Wrecks of the African Slave Trade with Ken Stewart