Using Hi-tech cameras, Britain’s own underwater Atlantis may be revealed.

Marine archaeologists Stuart Bacon and Professor David Sear, of the University of Southampton, will explore the lost city of Dunwich, off the Suffolk coast, which had gradually disappeared into the sea because of coastal erosion. 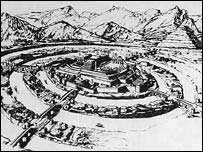 Dunwich was the capital of East Anglia 1,500 years ago. Its downfall began in 1286 when surges from the ocean hit the East Anglian coast and it was eventually reduced through coastal erosion to the village it is today.

Mr Bacon and Professor Sear hope to begin exploring the seabed in June.