Back in June, I wrote an article titled Reefs Need Our Help Now. A small portion of that article was concerned with a coral bleaching event on the Great Barrier Reef. In that article, I had the following quote:

“We found on average, that 35 percent of the corals are now dead or dying on 84 reefs that we surveyed along the northern and central sections of the Great Barrier Reef, between Townsville and Papua New Guinea,” by Professor Terry Hughes, Director of the ARC Centre of Excellence for Coral Reef Studies at James Cook University (JCU).”

“The Authority’s preliminary analysis of last summer’s coral bleaching event indicates its impact was highly variable across the Great Barrier Reef with an overall coral mortality of 22 per cent. The most severe bleaching occurred in the remote northern third of the Marine Park, which experienced the greatest heat stress, while most reefs south of Port Douglas–Cairns region escaped major impacts.”

This remote northern third of the marine park has always been considered the most pristine reefs in the Great Barrier Reef and among the most healthy in the world. While the 22% lost is very high, also in the statement the doctor noted that in the three years prior to the bleaching incident the Great Barrier Reef had a 19% growth rate. In that light, the impact does seem less. 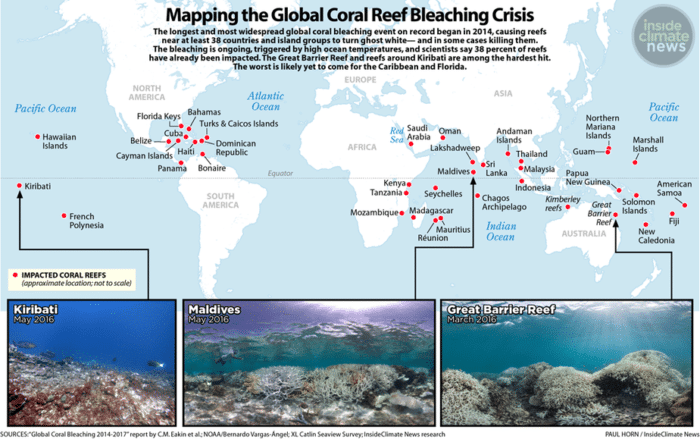 Reef Conversations at the DEMA Show

While at the DEMA show, I took the opportunity to introduce myself to the 2004 Scuba Diving Hall of Fame inductee Mike Ball. I will admit, that I have admired the man and his achievements since I started diving. He has introduced many innovations into the diving industry especially those concerning scuba diving liveaboards. Mike Ball Dive Expeditions currently has the liveaboard Spoil Sport which operates from Cairns to the Ribbon Reefs and out to the remote Osprey Reef in the Coral Sea. The trips are seven days and can be split into a 3-day or a 4-day segment. The company is active in environmental and marine research projects and over the course of the year has special expeditions in support of different programs. These special expeditions take the Spoil Sport and her staff and guest to locations not normally visited.

During our talk, I asked him what was his experience in recent trips and for any observations, the dive staff may have made in regard to the reported death of the reef. One of the Spoil Sports trips was a Far North Reconnaissance Expedition just a few months ago in August. I was told that they visited many places to dive among the Mantis, Cat and Tijou reefs among others. These are all north of Cape Melville and in the area where the greatest damage is said to have happened. While there were some locations that showed signs of bleaching, They found many locations that were not impacted by the bleaching event. There are many locations that are still in pristine conditions. The results of the reconnaissance were incorporated into a Northern Reef Exploratory trip planned for 2017. The potential dive sites and the latest evaluation of the sites are showed on the promotional material for the trip.

One should never take one person’s viewpoint as the final evaluation. I was introduced at the DEMA show to Phillip Hobbs, a director of TUSA Dive. TUSA Dive is the operator of the liveaboard Spirit of Freedom. The Spirit of Freedom does a trip similar to that of the Spoil Sport. They leave from Cairns on a seven-day trip that includes many of the same destinations, however, in a different order. It also can be split into segments. Our conversation focused on the “reef is dead” obituary, the Great Barrier Reef Marine Park Authority’s response, and their own experiences. TUSA Dive also has done an evaluation, are satisfied with the results and they have also placed their reputation on the line as Mill Ball has done by scheduling a 2017 itinerary to the far north reefs.

I have seen signs of coral bleaching in different places. We all have seen the images of the massive bleaching of coral reefs and we have heard the media reports. Members of scientific community are greatly concerned about the health of the reef. The viewpoint of the liveaboard operators and the Great Barrier Reef Marine Park Authority seem to be in stark contrast to all of that. Clearly, the Great Barrier Reef is not dead. You would just need to visit the websites of either of the liveaboards to see recent images. Both websites carry trip reports that include images done by guest aboard the trips. The scientist who have reported the massive bleaching are also correct. It is a serious problem that needs our help. It is just that we have not reached the point of no return YET.

One of the great things with a show like DEMA is that it brings divers from around the world together in one place. After talking with the Aussies, I headed over to the booth that Malaysian tourism had. There, I gather together a half dozen dive operators who were diving in 1998 and asked them about coral bleaching. While we touched upon the impact there of the recent bleaching incident, my primary focus of questions concerned the massive bleaching they had in 1998. Malaysia also experienced bleaching events in 2004 and 2010. The divers all agree that they saw the impact of coral bleaching back then. However, they all stated they saw the reefs recover slowly and most reef that nearly died in 1998 have fully recovered, at least from a visible point of view.

I, for one, am happy to hear that those who experience the Great Barrier Reef daily still believe in the reef. They believe, as do I, we still can get the reef back to full health. It will not be easy, it will take a great deal of work. Scientist tell us that global warming is at fault and we can expect that bleaching incidents will occur more frequently. We just need to do whatever small part we can to improve our environment.

The dates of the “Let’s Talk Aquatics: Marine Virtual Series” have been announced.
Read more
Ocean

The Reef Renewal Foundation Bonaire recently announced the addition of Divi Dive Bonaire and VIP Diving to the list of dive operators that are supporting the island's reef restoration efforts.
Read more