I truly believe that Sea Cucumbers are the most passively rude creatures I’ve ever come across. Sure, they seem to just lay there on the sea floor, but swim a little closer and all respect for fellow living beings goes right out the window. I’m serious; these critters are just plain old disrespectful. In fact, if they don’t like the looks of you, it’s not uncommon to be greeted by a spew of their back door plumbing. Not to mention words that are typically used to describe these guys. Honestly, how else are you going to describe a critter that is long, cylindrical and when handled by unsuspecting divers, hardens up and eviscerates. I’ll tell you this; any of the words that pop into my head are not words I’d dare utter to my mother.

In defense of Sea Cucumbers, Mother Nature hasn’t given them much to work with. There’s really nothing cute about these guys, eye-less, warty and slimy, even all the action seems to take place in the rear as well. Not only do they breathe and excrete through their poop shoots, but guests enter through the back door as well. 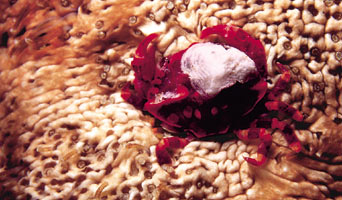 There are more than 1000 species of Sea Cucumbers, most of which are deep water varieties. In fact, Sea Cucumbers make up 90 percent of life forms that inhabit waters at 8,000 meters. These cool cucumber-like critters vary in length from 2 centimeters to 2 meters in length. Sea Cucumbers belong to the phylum Echinodermata along with Sea Stars, Sea Urchins, Brittle Stars, Sand Dollars, and Basket Stars. Loosely translated, Echinodermata means "spiny skin." All critters belonging to the Echinoderm phyla are characterized by pentaradial symmetry, which means their bodies are separated into five duplicate parts. Each of the five body sections is identical to the other four. One way of looking at a Sea Cucumber is to imagine a five armed Sea Star folded up into a long tube. Sea Cucumbers also have a distinct dorsal and ventral side, top and bottom. These guys don’t have eyes, hearts or brains, so maybe they can take all the bad rap we dish out about them.

At first glance Sea Cucumbers don’t appear to lead very active lives but they are actually the Hoovers of the sea floor. Most species ingest sediment from the bottom and filter out the digestible parts such as animal and plant remains, then excrete the processed sand. It is a slow process, but surprisingly some of the larger species filter up to 100 pounds of seafloor a year! As a result of their affinity for cleaning sand, Sea Cucumbers can have a significant impact on the health of an underwater ecosystem. Other species of Sea Cucumbers that don’t bottom feed use the tentacles surrounding their mouths to filter feed organisms from passing currents.

Like other Echinoderms, Sea Cucumbers are equipped with hydraulically controlled tube feet for locomotion. The Sea Cucumber hydraulic system is quite simple and effective. When the tube feet press against a solid object, water is withdrawn from the small canals attached to each foot creating a suction effect. When the water flow is reversed, the suction is released. The result is a mind numbing speed of 2 to 3 cm a minute.

The subject of Sea Cucumber mating brings up a flurry of images to most people, usually involving pickles and smooching. Contrary to popular belief, there are female Sea Cucumbers and fertilization occurs externally. This type of fertilization is known as spawning. Sea Cucumbers release chemicals into the water to signal others that the time has come for spawning, at which point both sexes lift their bodies into a cobra-like posture and release sperm and eggs into the water column. The fertilized eggs then develop into free-swimming larvae and settle to the bottom after several days. However, there are always exceptions to the rule. Aside from several asexual species, some brood their young in small pockets in the skin surface.

I will admit, my favorite fish in the ocean is usually found in close proximity to Sea Cucumbers, very close proximity: the wonderful, and ever elusively shy, Pearlfish. Actually, shy is not the best word as anything that weasels their way into the butts of numerous Sea Cucumbers couldn’t possibly be anything less than bold. Long and slender fish, on average about 15 cm in length, these guys fit right in. They find safety and even midnight snacks within Sea Cucumber anui (plural form of anus?). Pearlfish are not the only creatures to be found in association with Sea Cucumbers, but they are one of the few that can be found within a Sea Cucumber. If you gently roll over a Sea Cucumber you will almost always find a crab or a shrimp hiding underneath.

I’ve been waiting to bring up the best part about Sea Cucumbers, their complicated defense system. First you must know that Sea Cucumbers have a remarkable ability to regenerate portions of their bodies, that will make this next statement easier to comprehend. When threatened, Sea Cucumbers shoot out their guts at the attacker. That’s right, their guts. Whether horrified or repulsed, most predators are deterred once this occurs. Their guts are a sticky subject as the parts that are eviscerated are more accurately referred to as Cuverian threads. In some Sea Cucumber species, the Cuverian threads contain a toxin, known as Holothurin, that is so poisonous that even a small quantity is deadly to most predators. After evisceration occurs and the predator is dissuaded, the Sea Cucumber simply regenerates the sacrificed innards. Regrowth of the sacrificed innards usually takes a few weeks, after which the Cucumber is ready for gut ejection once again.

One other Sea Cucumber defensive strategy that is worth mentioning is their ability to become hard or soft at a moments notice. Typically the softening and hardening is only used for wedging themselves into tight crevices. This variance in body consistency is accomplished by up taking or expelling seawater. This response is easily observed when handling Sea Cucumbers out of water. When removed from the water environment, Sea Cucumbers usually harden as a reaction, and a steady stream of water pours out from their anus. It is especially entertaining to hand a Sea Cucumber that is in the process of hardening to an unsuspecting person. Not wanting to harm the Sea Cucumber by throwing it down, often a look of pure disgust washes over their face while they endure the steady stream of water emanating from the being in their hands. This is often the moment to snap a photo for future blackmailing purposes.

With the exception of a few species that are harvested for consumption, Sea Cucumber numbers are thriving. Yes, someone, somewhere still believes that eating disgusting food serves as an aphrodisiac. These tricky people like to pass off Sea Cucumbers as a romantic-hard-to-pronounce food and call it Bêche de mer. Don’t let the name fool you, there’s nothing romantic about getting Sea Cucumber stuck in your teeth!

If you’re not inspired to go inspect the rears of Sea Cucumbers, I don’t know what else to say. So if you’re the least bit curious, get out there with your prescription dive mask and join me in exploring the fascinating lives of Sea Cucumbers. You may even come across a Pearlfish, but don’t tell me I didn’t warn you that looking into a Sea Cucumber’s backside has the potential to be a sticky situation.