Instead of the Discovery Channel’s upcoming Shark Week, I decided to take this opportunity to write about one of the most publicized critters in the ocean, Sharks! Not only do I want to illustrate exactly what makes these creatures so fascinating, but also why I shouldn’t have to clear certain bodies of water of any and all sharks so that my friends will come swim in the ocean with me.

Sharks are an interesting enigma. They are essentially what keeps most people out of the ocean and others like me in it. Perhaps it is the mysteriousness that surrounds them or the connotations of their name, but I think both camps may benefit from a window into the world of Sharks. 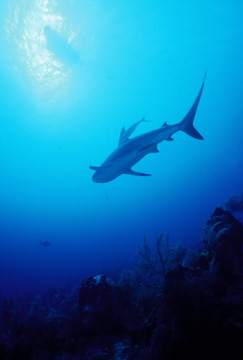 The typical answer to the question, "Why are you afraid of sharks?" is, "I watched the movie JAWS." I’m not knocking this answer, but I’d be hesitant to blame Peter Benchley for evoking such extreme feelings out of anyone. When you think about it, Sharks were pretty scary before moving pictures were even invented. Have you ever seen the size of the Megalodon Shark jaws at the Smithsonian? Yeah, I don’t need Steven Spielberg to tell me that an animal with teeth that size roaming around the ocean is scary. In fact, Sharks have all the elements of a horror flick in their favor. Lidless eyes (weird), sandpaper skin, razor sharp teeth, the deep ocean is their home . . . yup, horror flick written all over that description. So why shouldn’t we fear Sharks? I’ll tell you.

There are over 460 species of sharks in the ocean and only 36 of them have been known to bite humans. Ok, 12 percent is not a great statistic, but how about this one: A person has a better chance of being struck by lightning not once, but twice, before being bitten by a shark. Ok, you may have heard that one before, so here’s one to bring it home: 150 people a year are killed by falling coconuts, which is 15 times more than the number of people that are fatally attacked by Sharks. So, essentially what that last one is saying is that if you’re going on a tropical vacation, you are safer snorkeling along the beach than walking on it. Food for thought.

Several months ago I came across a story about a snorkeler down in Australia who was bitten on the leg by a stubborn Wobbegong Shark. Stubborn because the repugnant little critter wouldn’t let go. In fact, the guy got into his car and drove to the nearest lifeguard station, with the animal still attached, for some help with his situation. Luckily the lifeguard was wearing his smarty pants and had enough sense to pick up a freshwater hose and spray the sucker off. I’m only telling this story because yes, not everyone dies after a Shark attack. 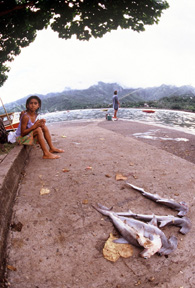 Sharks, as we know them today, have been around for millions of years, but shark-like fishes appeared almost 450 million years ago. Fossil records of Sharks are few and far between because the cartilage that made up their skeletons has disintegrated through time. Special conditions had to exist for a Shark skeleton to have been preserved. It is with these rare fossils that species like Helicoprion and Stethocanthus were first discovered. These animals can be described as nothing short of bizarre. Heliocoprions are characterized by their unusual layers of teeth that roll back under and into themselves rather than shedding like those of modern day sharks. Stethocanthus Sharks had a pad of teeth on their backs where modern day sharks have their characteristic dorsal fin. Most likely these curious sharks evolved to fill in very small ocean niches, and this specialization is almost surely what led to their extinction. This specialization is also what led to the reign of Requiem Sharks (Great Whites, Makos and Porbeagles) that exist today. Approximately 100 million years ago the Requiem Sharks fulfilled the role of apex predator when the ocean was abundant with evolving marine mammals thick with blubber.

In present day, there are over 460 known species of sharks that have specialized to fill in various niches in the ocean. Though they are not quite as bizarre as some of their ancestors, a few of the deepwater variety certainly come close. The sizes of Sharks range from miniature Dwarf Sharks, that can fit in the palm of a human hand, to the enormous Whale Sharks that can reach over 60 feet. Shapes include flat and frilly like Carpet Sharks as well as cylindrical and streamlined like Blue Sharks. So, the telltale dorsal fin cutting through the water is not really what makes a "shark" necessarily a Shark.

Along with skates and rays, Sharks belong to the group Chondrichthyes, fish whose skeletons are composed of cartilage. All Sharks share certain distinctive characteristics. While most bony fishes have swim bladders to aid in buoyancy, Sharks do not. To compensate for this they have very oily livers and an extremely light bone structure composed of cartilage. The majority of Shark species are characterized by a fusiform (rounded and tapering at both ends like an American football) body. This streamlined, cylindrical body shape reduces drag and requires a minimum amount of energy to swim. The characteristic sand paper-like skin of Sharks is also a tool for efficiency in the water. Their skin is covered by small scales that are referred to as dermal denticles, or skin teeth. The dermal denticles are so named because each has three layers like a tooth: a central cavity, middle and outer enamel. Their arrangement on the skin channels water over their bodies in the most efficient manner possible. Any wetsuit manufacturers out their interested in a new prototype? You may also hear Sharks referred to as Elasmobranchs. The word Elasmobranch, or "strap gills," is a reference to the 5 to 7 gill slits along the side of their bodies.

The array of Shark senses are probably the most fascinating thing about them. Most of the senses are primed upon finding injured or struggling prey. For example, Sharks have the ability to sense low frequency sounds emitted by struggling fish from up to a mile away. They can also sense a drop of blood in the water from up to half a mile away. Similar to the eyes of a cat, Sharks possess something called a Tapetum lucidum which is essentially a layer of shiny plates behind their eye that functions by amplifying even the smallest amounts of light. By far their most amazing sense is the ampullae of Lorenzini. I know I’m throwing a bunch of big words out there, but I don’t expect anyone except the fish nerds to remember them. The ampullae of Lorenzini are a series of gel filled pits at the base of a Sharks snout. They actually sense electrical fields in the water column put off by living creatures. The biological electric fields of living critters and pieces of metal unfortunately are almost indistinguishable to Sharks. This may serve as an explanation for their propensity to bite cables lain in the ocean.

Reproduction in Sharks is also a topic of fascination. Unlike most fishes, Shark reproduction occurs internally. Male sharks possess two appendages on the underside of their body known as claspers. Typically Shark reproduction is a violent affair in which one or both animals swim away with a new scar. Once the female has conceived, there are three ways in which the embryos develop: vivipary, ovovivipary and ovipary. Vivipary is "live birth" in which the embryos develop in one sack internally, ovovivipary is where the embryos develop internally in separate sacks and ovipary is where the mother lays egg sacks and leaves them to develop and hatch on their own. These external egg sacks have a tough and leathery outer layer that dries out and forms what some people refer to as Mermaid’s Purses.

I wish that that the passion that goes into fearing sharks could flip 180 degrees and turn into the passion that saves them. We kill by far more Sharks every year than is even conceivable and ever possible for their slow reproduction and maturity to withstand. I’ve read estimates that 100 million Sharks a year are killed whether as by-catch, or for their meat, oil or fins. Like any animal whose survival is threatened, education may be the key to their survival. Slowly, more and more species of Sharks are receiving protection throughout the world and hopefully, their populations will be able to bounce back.

Now, I’m not telling you go out and participate in "Hug A Shark Day," but do appreciate these bizarre and wonderful animals for what they are and not what Hollywood has made them out to be.

Suunto give us an inside look onto the process of how a dive computer makes it off the drawing board and onto your wrist.
Read more
Scuba Diving

If you're an advanced scuba or technical diver -- be it a rebreather fanatic or a freediver -- you might want to check out SCUBAPRO's new Aladin A2 dive computer.
Read more