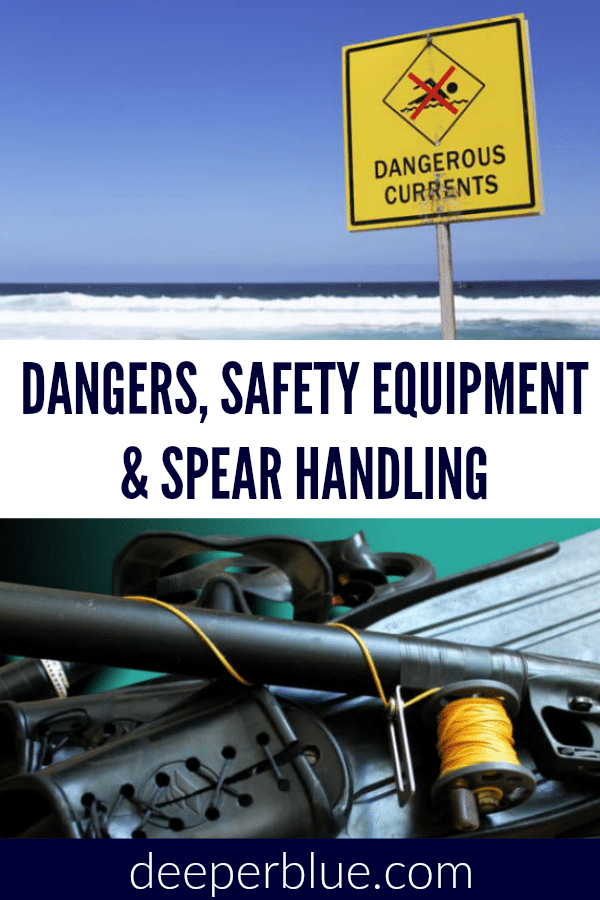 Spearfishing is a sport that has all the normal dangers and risks of Freediving or Scuba Diving, along with the added complication of a speargun/polespear/sling.  I try to break down some of the dangers, equipment to keep you safe and the proper way to handle the spears in this article.

Currents may cause bigger issues for spearfishermen than other divers, simply because their intention is to bring back prey in addition to everything else they started out carrying. Fish often frequent current areas and many also use it to their advantage by fleeing into or across the current. The best way to handle currents is to be aware of their existence and preplan for them. Shoreline divers need a resting float with low drag to store prey in and provide a place to put up a diver-down-flag. Along beaches rip currents are caused by waves returning offshore from the beach, so to get out of the current divers should swim parallel to the beach until feeling no current flowing offshore, and then swim into shore. Divers need to know how to identify rip currents to avoid them, so look for breaks in the wave line and muddy water flowing out from the beach. Tidal currents through inlets and passes are often the strongest currents a diver may encounter and they flow fairly long distances. Visibility is usually better at high tides when clearer offshore waters are flowing inshore. Swim perpendicular to tidal currents to exit rather than fighting the current head on, and if unable to exit the current, just stay afloat and save energy for mobility to avoid bridges or jetties. After drifting through the inlet/pass the current will slow, allowing an easier swim to shore. Longshore currents are usually slower the closer they are to shore but sometimes faster on the surface. Diving is easiest in currents if you have a vessel, a paddleboard, kayak or boat to navigate over the current and return to your point of departure. In major currents like the Gulf Stream in southeast Florida, most divers drift dive, where the boat drops them up current of the reef and then picks them up again after the ride. If the current is manageable divers can drift dive from kayaks or paddle boards too.

Waves are caused by wind and are often accompanying current, and make surface swims difficult. Besides making divers seasick, big waves can cause loss or damage of gear, personal injury or make it difficult to keep track of dive buddies. I recommend training in navigation and search & rescue, but here are a few tips. Use of a float and floatline can help find your buddy as well as hold onto your prey. Divers can sometimes be found on the surface by kicking high and looking around, but many times it’s easier to dive below and look back up for the diver’s silhouette. Call or blow a whistle, for the diver or the boat, or get on a kayak or paddleboard for a better view. Note the time, mark your position by GPS, triangulation or a marker float if possible. Generally, it’s more likely to find a diver down current or down the waves, so work a pattern back and forth across the down current direction for a reasonable distance. (Strong winds can change things as can tidal currents.) Call for help on a VHF radio or flag down a passing boater who probably has a VHF radio.

Diving in low visibility is toughest for freedivers because it’s very difficult to dive to a reef or wreck if you can’t see it from the surface. Spearfishing around Tampa Bay, FL most of my life, I’ve often experienced visibility less than 5 feet which is not safe or efficient for spearfishing. The more usual 20 feet of visibility when 10 to 20 nautical miles offshore in the Gulf works okay, and there are a lot of fish! We dropped marker jugs there on the dive sites and followed their lines to the bottom. Again float lines help to keep a safe buddy team together. In low visibility, spearguns can be aimed from a position alongside the shooter, which looks much like shooting billiards and allows the spearo to get close for a better view of the target. Aim slightly downward to reduce range and pull the trigger with the thumb, then pull the gun back so the spear clears the muzzle. Polespears are very good in marginal water clarity, sometimes allowing second shots to secure wounded fish.

Stinging marine creatures like scorpionfish, fire corals, and the newest arrival, lionfish are tough to see when camouflaged into the reefs and can cause annoying to serious injuries. Spiny urchins, sharp barnacles, gill plates and spines from fish, and shipwrecks with jagged metal and lots of hooks and tackle are more obstacles spearfisherman frequently face. Proper weighting and buoyancy skills along with protective wetsuits and safety equipment, (see below), can make the underwater world manageable for a knowledgeable spearo.

Entanglement in shooting lines is one of the biggest danger issues with spearguns, besides their obvious projectiles, which I’ll cover below. Just like marine life, divers can get tangled in discarded fishing lines and nets. Hawaiian slings and pole spears are sometimes being rigged with reels and shooting lines as well. Powerheads are firearms attached to spears or shafts, mostly for defense or sometimes used by commercial spearfishermen. Anytime ammunition is added to spearfishing equipment it creates more dangers. Bullets and triggers can find a way to detonate at unwanted times.

No spearfisherman should dive without a sharp knife, due to potential entanglement issues. The stiletto style is a great cutting tool and the best blade design for finishing off prey. The best sheaths only require one hand to draw or sheathe the knife. Today many divers also carry sea snips that cut the cable as well as lionfish spines.

Gloves for spearfishing need to be tougher than the average dive gloves, because fish have sharp gill rakers, plates, and spines, and they need good dexterity for handling spearing gear and feeling triggers. For warm climates, woven Dyneema and Kevlar gloves with no seams have raised the bar high in meeting the toughness and dexterity criteria, and are surprisingly affordable. Polyurethane protective coatings will last a long time, unlike the latex coatings found on economy gloves known for one-time jobs. For cold water, full neoprene wetsuit material is a must with Amara or Kevlar palm materials for added durability.

As a spearfisherman, I always have a gun, sling shaft, or polespear with me, which doubles as a flagstaff. For forty years I’ve carried a folded up dive flag, with a couple tie-wraps attached to hook it to the end of my spear shaft. It’s a great safety marker, that doesn’t blow down in high wind, and meets legal requirements for dive flag laws. Signal marker buoys/safety sausages are also good visual devices with a little-added buoyancy thrown in, and most divers can find space to carry one.

Electronic safety gear such as VHF Radios and EPIRBs are great for boats, kayaks or floats, but most have shallow water pressure limitations. The Nautilus Lifeline came out about five years ago and combines a water-proof VHF Radio with Digital Selective Calling (DSC), which transmits GPS Lat/Lon coordinates via the radio. Best of all it’s rated to a depth of 425 feet / 130 meters. (Nice side benefits are a memory of dive site Lat/Lon coordinates and VHF stations for personal calling.)

Although today’s spearguns are not fired by gunpowder, (yes it has been tried extensively), these rules also apply to all spearguns, pole spears, and slings.

Now let’s look at how these 4 rules apply to spearfishing.