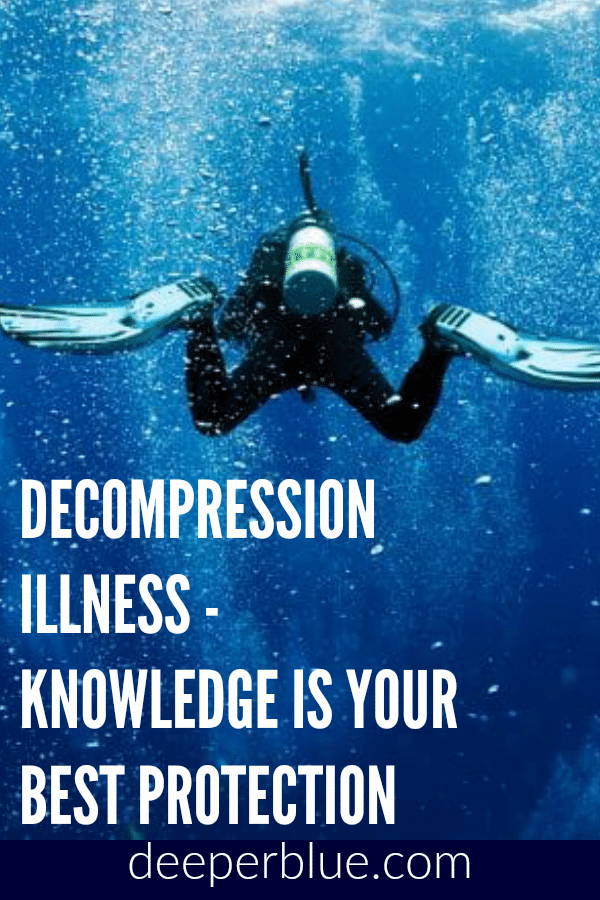 This is the DeeperBlue.com Beginners Guide to Scuba Diving.  We’ve put this guide together to help budding Scuba Divers understand what is required to get started.  Part 8 of this series takes a look at Decompression Illness.

They say that for every Ying there is a Yang, For every good, there is a bad. For scuba diving, the bad is Decompression Illness or DCI. To quote the Diver Alert Network (DAN), the largest organization focused on dive medicine,

“DCI encompasses two diseases, decompression sickness (DCS) and arterial gas embolism (AGE). DCS is thought to result from bubbles growing in tissue and causing local damage. While AGE results from bubbles entering the lung circulation, traveling through the arteries and causing tissue damage at a distance by blocking blood flow at the small vessel level.”

While there are similarities between the two, it best to remember DCS relates to tissue and AGE to the blood supply.

In the early day of diving, before we learned about the effects of gases under pressure on a divers body, DCI caused many deaths and gave scuba diving the notoriety of being a deadly thrill. It is not really an accurate statement saying the effects were unknown, it is more accurate to say they were not understood, not by medical personnel and clearly not by divers.

Decompression Sickness, What is it and how to avoid it

In your open water training, you review the basic principles of three laws of chemistry, they are Boyle’s, Charles’s and Henry’s laws. Elements of these laws will help to explain how gases under pressure react within our bodies. In 1662, a physicist and chemist named Robert Boyle proved a theory that volume and pressure were inversely proportional. We learned Boyle’s law in science whereas when pressure increases volume decreases. This principle is not only important for us to understand for DCS avoidance but also impacts how long a tank of air will last. Boyle also believed that nitrogen under pressure would be introduced into our bloodstream in larger amounts and forced into the tissue. Henry’s Law in 1803 proved that Boyle was right. It also showed two important concepts. Increased pressure also increased the solubility of blood to carry nitrogen, and the tissue would try to balance the presence of nitrogen in the lungs. Boyle also stated that if the nitrogen was not able to escape the tissue, it could cause physical damage. As we descend the partial pressure of nitrogen we breathe goes up, as well as the blood’s ability to carry it. So the tissues start loading nitrogen. When we ascend, the partial pressure is now higher in the tissue, so it will start exciting the tissue. However, the blood solubility for nitrogen has been reduced so there is a delay leaving the tissue. Think of it as a three-lane highway going in but just a one-lane coming out. If you give it enough time, it will get out. DCS is medically classified into two types, type I which is pain only, and type II which covers the rest.

In the late 1800s, workers building the Eads Bridge (St. Louis) and the Brooklyn Bridge (New York City) were becoming ill and many of them died from the illness. The bridges were being built using caissons. These are metal devices with an airlock at the top and open at the bottom. They were placed on the river bed and filled with compressed air to pump the water out. The pressure was maintained to keep the water out. Workers would enter the device’s airlock, travel to the bottom to work digging and placing the foundations and anchors for the bridges. When they returned to the surface, many of them became ill within minutes. The illness became known as Caissons Disease, which we now know as Decompression Sickness. DCS can be slow in its appearance. Most cases appear between 5 minutes and six hours after a dive, a small percentage up to 12 hours and even a smaller percentage as long as 48 hours. Flying or going to a higher elevation can also bring on DCS if excessive nitrogen remains in your tissue. Divers are advised to wait 24 hours before flying. Symptoms of DCS which the workers also endure are (these are things you feel):

Signs of DCS (Item that are noticeable):

It did not take long before all workers suffer to some degree from DCS. It was noticed that the symptoms became milder or disappeared entirely while the worker was deep in the caissons. In the medical studies it was found that if they brought workers up slowly, fewer became ill, even less if they stopped for a few minutes on the way up. These doctors for the bridge-building company’s were the first to bring light to the concept that we use for maximum ascent rate and the principals of decompression diving. On a lighter note, the situation with the workers leads to the development of the term bends. In scuba slang, we will hear someone say, “they got bent” or “be careful of the bends”. Technically this applies to type I DCS. For the caisson workers, within a few minutes most were bent over in some degree of pain after their work shift ends. At the time there was an upper-class fashion called the Grecian Bends. The body position of the men in pain from their work was very similar to the body position of women wearing the Grecian Bends style. So the term was also applied to the workers.

These early studies were expanded upon by the US Navy and the U.S. Navy dive tables were developed. Using a maximum rate of assent as a part of the calculations, the dive tables gave some guidance on how long a diver could stay down and avoid DCS. This is the science behind all the dive tables, dive computers and warnings you receive.

In your open water training, you will learn or did learn the principals of avoiding DCS. They include how to read the dive tables and use them to plan your dives. Also, included will be the safe rate of ascent and the practice of a 3 minute stop at 5 meters for extra safety. Currently, the use of the dive tables is not as frequent as it once was after training. Dive tables are based on diving to a specified depth and the calculations are based on that. Technology in the form of dive computers can read current depth and time then use formulas to give a real-time evaluation based on your dive. Still, having a good understanding of dive tables are a good foundation to manage your risk.

DCS does have another dark side, even if you follow all the rules, you still can get DCS. It is known that certain factors can increase the risk of DCS. Certain drugs, a hangover, being overweight and dehydration are just some of the known factors that might make someone more likely to become a victim. Even setting those factors aside, some people get it anyway. The percentage is small but still there.

If you have any concern that you or a fellow diver is being effected by DCI you need to seek medical attention. As an immediate first aid, administer 100% oxygen. This may be enough to slow the progression and maybe even stop it. Then get evaluated by a medical professional knowledgeable of dive medicine. A decompression chamber is used to treat DCI, it brings a patient to a condition under pressure and slowly brings them back to surface conditions. Prompt treatment may result in no lasting complications.

The second member of the Decompression illness classification is the Arterial Gas Embolism. AGE happens when the bubbles in the bloodstream block the flow of blood, a bubble larger than the capillary vessel. The lack of blood can cause tissue damage. As the brain is one of the largest users of blood, it is the one organ most at risk. AGE can cause strokes and create brain damage. The percent of AGE cases only make up about 7% of the DCI cases. As bad as that sounds there is one thing to remember, AGE is almost 100% preventable. When you breathe, the lungs diffuse gas into the bloodstream. Large molecules are blocked. AGE is caused by Pulmonary Expansion barotrauma. This happens when you hold your breath during ascent. The air in your lungs expands as the gas does. However, when it reaches its limit it will burst, just like adding air to a balloon eventually, it will burst. This rupture in the lung will allow air to pass directly into the bloodstream without the larger molecules being blocked. In some rare cases, AGE has occurred on seemly normal ascents. These cases have mostly been linked to preexisting heart or lung conditions.

Many of the signs and Symptoms of AGE are similar to DCS type II, and the first aid for them is the same. Administer 100% oxygen, make comfortable and seek medical attention immediately. AGE symptoms appear rapidly and escalate fast. Unlike DCS which seldom has symptoms underwater, death due to AGE can happen before the diver can reach the surface.

When you take your Open Water Diver training, most of the knowledge section and many of the skills relate to DCI and how to avoid it. It is these skills that you will practice and master that makes DCI a managed risk. Forty years ago if you became a certified scuba diver your life insurance company would cancel your policy. Some policies would have a higher premium for divers and exclude any benefits for deaths that happened related to diving. Times have changed, today diving is considered safer than horseback riding, and you have a greater chance of being injured on a golf course than getting a DCI. This is due to the training and your understanding of the risk. 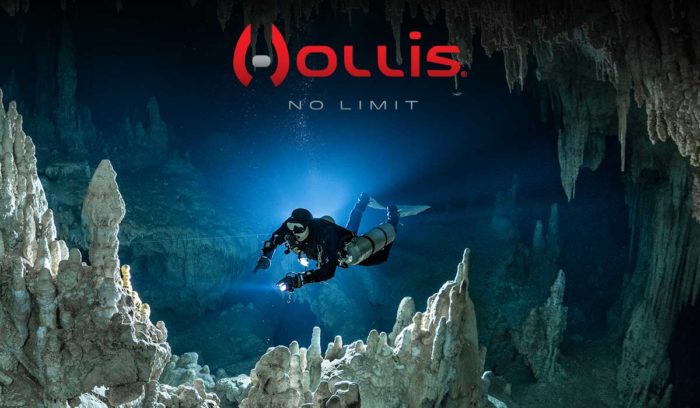 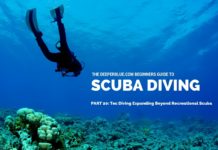 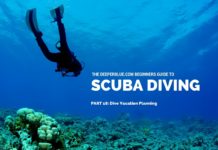