“God had an inspiration and he bought a Prism”. Is the recent quote circulating on the “Steam machines” booth at DEMA this year. This quote is coming without a doubt from Steam Machines British owner and engineer: Peter Readey referring of course to the competition. In front of the booth the trademark of the company seating on a pedestal: The Prism Topaz CCR. On the side of the booth a computer hooked on something that looks like one of these high tech virtual mask: The HMD (Head Mounted Display). Pete sees that I am eying it and invites me to come over and check it out. I put it on, grounding myself to dodge the constant static of the DEMA floor. Fabulous, it is like being seated in a mini movie theater. I already imagine myself watching Jessica Alba in newly released “into the blue” while on deco stop. 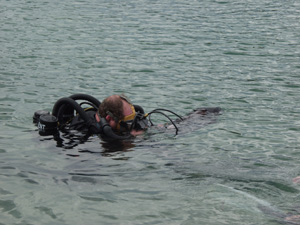 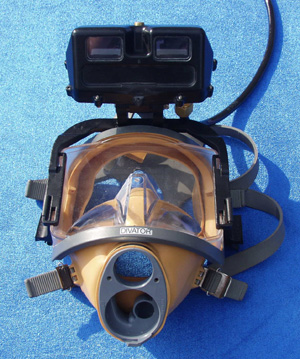 Pete picks up a black case, and we leave the booth to find some peace to chat. We seat down, Pete pulls out a traveling guitar from the case and starts playing. He is very talented, and it is nice to forget about the humming sound of the DEMA for a minute.

“If I loose my job I can always play the guitar!” he smiles and put his guitar away it is time to talk.

“First of all I am English, not American, not Aussie…English.” Pete started as a marine engineer in her majesty’s Navy. He started diving in the late 80’s after a BSAC course and due to his high air consumption he quickly realized that “open circuit wasn’t going to cut it”. He bought a Mark 16 rebreather, dove it a few times and his ever thinking mind picked up “ some issues”. In the midst of learning and improving the rebreather with the British manufacturer of the unit Carmela, he kept on working on several other engineering projects:” turbo charging Triumphs was one of them!”

He pursued building up his experience doing contract work for Draeger and Oceanic that eventually lead to the engineering and building in 1991 of the first Prism Topaz unit. “It was similar to a K.I.S.S unit”. After tests in 1993 at a depth of 420ft in a chamber, the unit was refined. At that time he sold his engineering company and he and his “lovely wife Sharon” traveled the world with the unit to introduce the unit to divers and see if there was a market. “Cochran got in touch with us to manufacture the Prism, we developed several patterns together” he stops “that was in Dallas in 94, in 1995 we moved to L.A and started manufacturing the unit as Steam Machines Inc.” 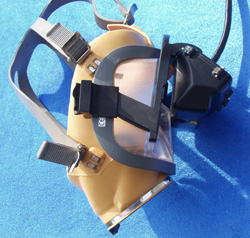 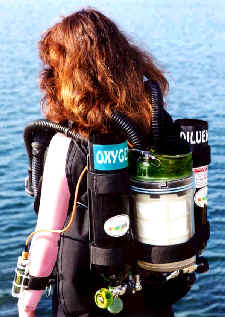 The prism passed the very stringent Navy tests and a contract was signed with Steam machines. “In 99 the Prism was in full production, space was becoming quickly in issue, which brought us to the big move to Tennessee on a 43 acre property”.

“We trained people, and invested, we now have half a million worth of machinery and molding equipment.” The move to Tennessee helped steam machine to cut 2/3 of their overhead. “We have a very unique approach and a lot of flexibility”. Pete continues on by explaining his ways “from the idea to the finish product”. Two main software FEA (Finite Element Analyses) and CFD (Computerized Fluid Dynamics) create the ultimate virtual environment to test his ideas “a replica of the real underwater world”. When testing is positive files are exported to the automatic machines and a prototype and molds are built.

This is how the HMD was born. At first the head mounted display was designed for the Navy for no visibility diving. Utilizing sonar technology a diver with HMD binoculars could see 80 meters away in a “no vis” environment. In the near future the HMD will become a part of the peripheral add ups to the Prism unit. “It could be used for many different applications, from scientist data, to navigating systems.”

I could have kept talking for hours; Pete is a fascinating person and a living encyclopedia on rebreathers. He had to head back to his booth; I had to cover Martin Stepanek static at the Dema pool. He invited me over to Tennessee “to learn more”. Peter Readey’s mind is constantly bubbling with new ideas, I am sure we won’t have to wait long before we see some extraordinary “Peripheral add ups” as he calls them to the Prism Topaz unit.

For more info go to www.Steammachines.com