Craic: Hiberno-English adjective simply meaning fun, enjoyment e.g. “We had great craic diving in Kerry, so we did”.

Ireland’s Atlantic coast is where the green edges of the continent crash into the ocean. With 5,000 years of settlement, the ruins of ancient Celtic stone forts chart the rise and fall of sea faring kingdoms, some who voyaged as far as Galicia in northern Spain, 2000 miles to the south.  From the peninsulas of Kerry north to the Aran Islands and north again to the surfing beaches of Donegal, clear waters harbour the best oceanic diving in Northern Europe. A well kept secret, diving in Ireland is established but low-key, in keeping with the laid-back country life.

As always there’s plenty of legend mixed into the 12L bottle when diving in Kerry. Warmed by the Atlantic Gulfstream it offers a unique experience, whether in amongst the islands and cliffs of the finger-like bays or out in the blue water around one of the massive sea rocks. Stories of sunken German U-Boats are wrapped around the bottle rack on the diveboat blended with sightings of sunfish at The Cow Rock and trigger fish in Murphy’s Cove! Fact is sometimes stranger than fiction: trigger fish are migrating to Ireland, carried along by the Gulfstream, they retire amongst the kelp beds! 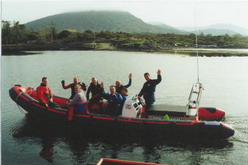 From high in the sky, Kerry’s long peninsulas look like Ireland’s toes dipping into that warm Gulfstream current. Temperatures here are significantly warmer than other shorelines on the island- they haven’t dropped below 10C yet this season- most local divers are dry-suit divers. Speaking with Paul Tanner, owner and operator of Beara Dive Centre, this, combined with the oceanic marinescape, makes it comparable to diving off California or Canada, but without the great whites!

Diving here is typically on reefs and walls, rich in marine life. Operating out of picturesque Kilmacalogue harbour, the dive boat eases out of the peaceful harbour past cormorants standing sentinel on the mussel farm moorings, setting off languorous ripples that wobble the blue plastic buoys, and whips out into the long stretch of Kenmare Bay, flanked by green hills that are streaked with uplifted ancient seabed rock. On the southern shores of the peninsula lies deep Bantry Bay- a wreck diver’s playground, which unlike Kenmare Bay, has been a port for commercial and even military shipping activities- the Spanish Armada lost ships here in the 16th Century. A World War II German U-boat went down in Kenmare Bay, somewhere between Ardgroom cliffs and Ardgroom harbour- legends weave with the kelp below to shroud its exact whereabouts. 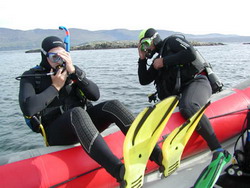 The best dive sites are in the blue water beyond the mouth of the bay. Out here, Tanner, a world travelled diver, twenty years in the business, surprises me as he enthuses about his personal favourite The Bull and Cow Rocks. For me it’s the Skelligs, but then I have yet to dive The Rocks! With visibility of 20 metres and a plethora of fauna, including sunfish, dogfish, wrasse, mackerel, seals and a casino of crayfish and lobster, he seconds The Cow Rock to Sipadan Island in Malaysia in his world dive experiences. Locally, Sherkey Island ranks number two: an ideal site for all divers, with deep drop-offs, sheltered shallows for beginners, and of course Dirk, the resident conger eel. Dirk should really be Ms. Dirk! 6 foot eels, and any congers living in Irish water for that matter, are maturing females who will someday migrate back south to mate with their diminutive other halves somewhere in the deeps off Morocco. 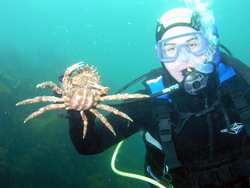 An hour’s ride out to sea Skellig Michael and Skellig Beag (which is Irish for Small Skellig) each rear out of the blue waters. At 220 metres tall, Skellig Michael is a majestic natural pyramid. Perched near the summit, at the end of a steep windy path are the dry stone built ‘beehive’ huts of 4th Century Christian monks, overlooking the spectacular vista of the Magillakuddy Reeks; Kerry’s mountain range fading into the haze of a sunny afternoon to the east, and west to America (which you can see on a clear day- to be sure to be sure!). Nearby, to the south east Skellig Beag, a blade of rock, is as sheer faced while smaller than its neighbour 350 metres away. In fact it remains untrodden by humankind, though it’s not certain whether this is because of its topography or due to the 20,000 strong gannet colony that has bleached the grey rock with generations of guano deposit.    Underwater, the rocky slopes are sprinkled with anemones and sponges, opening into canyons and massive boulders. The water is clear with some slight upwelling as the seafloor drops to 60m very quickly. We descend into a bowl at 15metres, like a crossroads, channels in the rock entice us this way and that. However the slope of the seafloor is easy to guage and we dip to 25 metres before levelling off at 18. 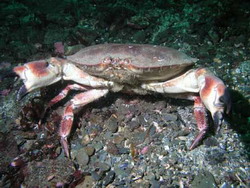 Some boulders loom overhead, amplifying that sense of weightlessness as we cruise along, nipping into chasms, gliding past overhangs, peering into recesses carpeted in shale. Big blue lobsters splay their claws while wrasse keep an eye on those bubbles. We can head right into a mini-canyon or loop left, skirting the microcosmos of life on the rock’s surface. Wandering around another rock; a pair of sallow puppy-like eyes greet us- I catch my breath, a flurry of bubbles escapes the regulator, my fins lock into brake position, I strain to merely hang in mid-water. Interrupted in its underwater snooping, suspended in mid-water, its milky corpulence appears almost ghost-like. This encounter is surreal for all of us- there’s something more otherworldly than ever about this particular seal- the mystical buzz of diving kicks in and I imagine this is a water spirit who has graced my presence. And before we can blink, it slips away gracefully, as if to chase a passing boat, and I can breathe again. The spell broken, I begin the muted exhaustion of my air supply with submerged ‘whoops’ and double handed “okay!” hand signals to my buddy Liam. I imagine the seal would have been very interested by this display of aquanautical idiocy! 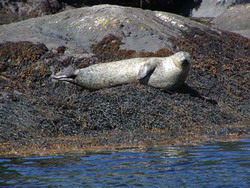 The second time round, this time off Skellig Beag, the seals waited until the end of our dive before accompanying us to the surface and waiting with us until the dive boat picked us up. Shy and quick, here and there, they regard us from a distance, unsure of us clumsy mammals. Although the Skelligs, a world-heritage site offers some spectacular diving, it is gaining in popularity. Nevertheless, this writer can attest to its appeal and ranks it up with his own experiences in Mexico and Honduras. Interestingly, Tanner mentions the appearance of blue trigger fish in the greater area, a species the writer thought endemic to tropical waters- such are the complexities and vagaries of climate change one can only marvel at the concept of coral munching trigger fish retiring to the kelpy safety of Murphy’s Cove- lured by the craic in Kilmac’s pub on the pier I suppose! 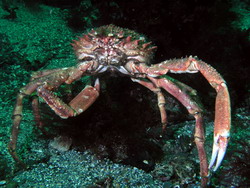 As for that third best dive site- it’s a toss up between Bere Island’s wall dive and the Mackerel Run off Inish Bernard. Drop down ten metres to your seats: a ledge on the wall, and watch life pass you by – literally! It’s like a scene from Finding Nemo without the voiceovers and sound effects- Mackerel stream by against the current in their droves. From the boat, it looks like the most boring dive possible- it’s a better kept secret that way!

Getting technical, there’s a U-Boat off the South Coast of Ireland, lying in 42m which Tanner will take you down to, provided you’re capable and trained up- he these are Nitrox dive conditions. Otherwise it’s time to unravel the kelp from the fact, and the tales from the ale, and find that other U-boat lying somewhere in shallower waters near Ardgroom harbour.  The easy part is getting to Kerry with a regional airport and three international airports, namely Shannon, Dublin and Cork, connectivity isn’t a problem. Diving and accommodation are cheap (EURO 28 each). Paul Tanner’s dive centre and watersports shop is located in Beara and contact details are available on his website. He offers training and can arrange accommodation at the pub on the pier in Kilmacalogue Harbour. www.kenmarebaydiving.com  – this site will redirect you to the new site www.bearadiving.com

Traveling By Air With Freediving Gear