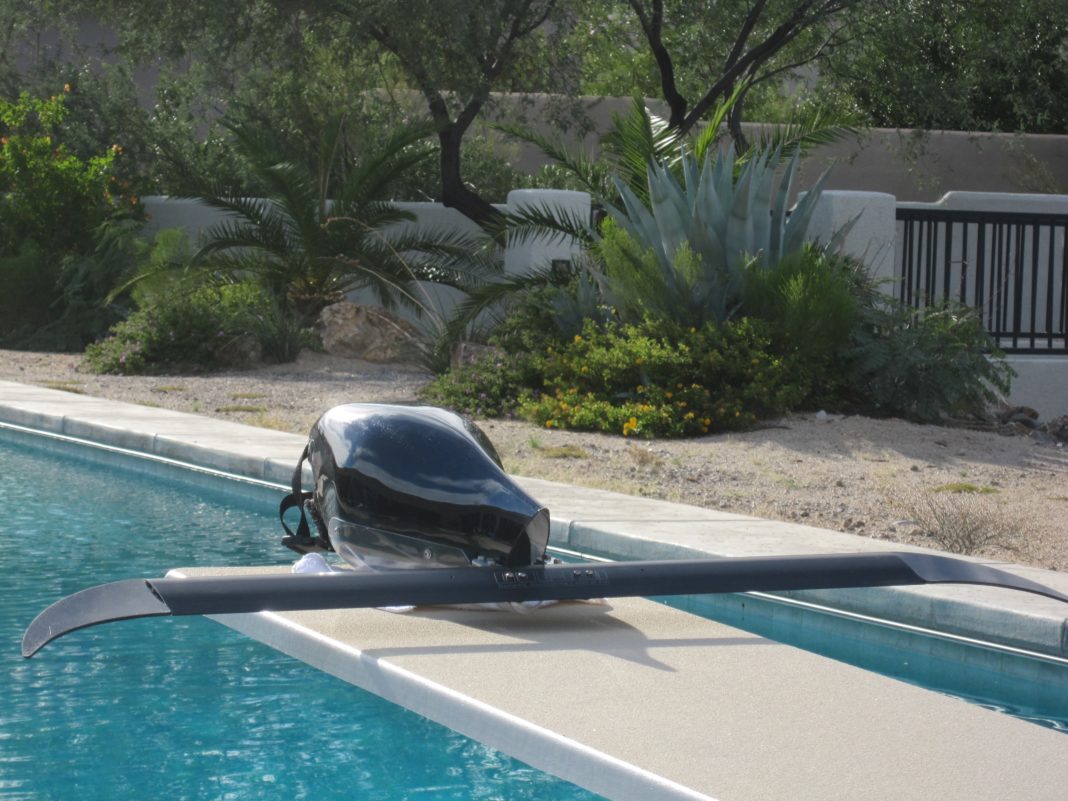 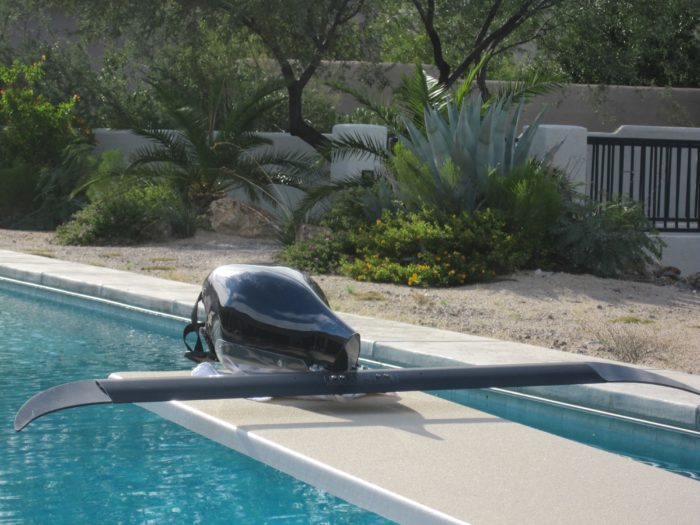 I was one of the first users of the Orca Mk-1 and since 2011 have logged thousands of dives with it, including an official dive to 77m at Vertical Blue 2011. I was extremely excited when Ron Smith released the Orca Mk-2. The Orca Mk-1 was already a revolutionary breakthrough in many ways, so I was actually a bit skeptical that the product could be improved at all in the 2nd revision. Nonetheless I was pleasantly surprised and it turns out the Orca Mk-2 is a major improvement over the Orca Mk-1.

One of my few complaints about the original Orca was the foot strap mechanism. This has been improved a lot in the Orca Mk-2, making it both more comfortable and easier to put on. With cotton socks or 3mm neoprene socks it can easily be put on while still dry. With 5mm socks it is still a bit of a challenge and I need to do an 8-10m dive to tighten the straps while my socks are compressed under pressure. Having said that it is still an enormous improvement over any monofin, since monofins can only be fitted to a single sock thickness, whereas the Orca will accommodate anything from cotton socks to 5mm or more. In the Caribbean I swam several kilometers with the Orca Mk-2 wearing only cotton (day-to-day) socks. My feet were slowly starting to blister but not badly, and I would say probably anything from 1mm to 3mm would be the ideal sock thickness.

Power transfer to the fin is also improved over the Orca Mk-1 and blows all monofins out of the water due to the absence of any flexible materials in the footpocket. When kicking with a monofin the footpocket invariably stretches, wasting power and energy. Not so in the Orca fins.

The Orca Mk-1 was already very streamlined, and while monofins are built with specific ‘angles’ between the footpocket and the blade, this angle is naturally a part of the Orca’s design. Nonetheless the Orca Mk-2 is still more streamlined than the original Orca, which is most noticeable during kick/glide phases of horizontal swims. 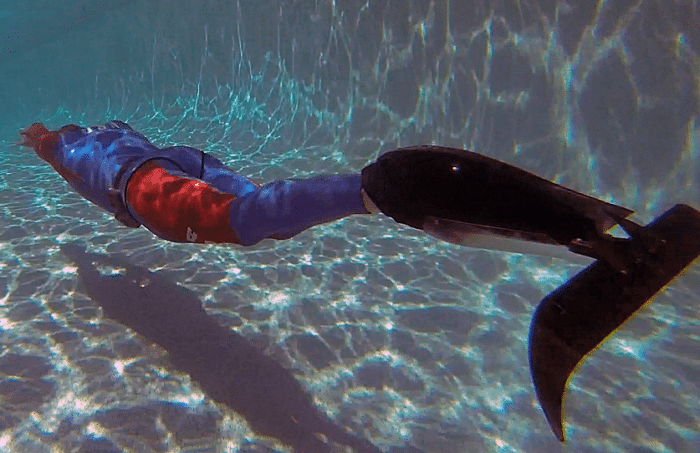 The Orca Mk-2 also generates more power than the Orca Mk-1, which is most noticeable when fighting positive or negative buoyancy. The Orca Mk-2 also has the most powerful ‘backstroke’ of any fin I have ever used. The device can be configured with different length lever arms, and for certain lever arm configurations the backstroke is actually more powerful than the front stroke, a radical departure from classical fins. An unskilled user will not even realize this and not make use of this ‘hidden’ power and energy. However once the proper technique is adopted, harnessing the extra power on the backstroke is what really moves this fin beyond the Orca Mk-1 or any monofin for that matter.

This brings me to the general topic of technique. In the late 90’s, during the early days of monofins for diving, bifin divers would try monofins and find them to perform very poorly. What was really happening is they simply had no idea how to use the monofin properly, and thus concluded the monofin ‘sucked’ in comparison to their ‘trusty bifins’. This mentality was so prevalent that in 2001 when I announced I would break the constant weight record with a monofin everyone in the community laughed and said that was impossible, as bifins were clearly superior. It so happened that the ideal monofin technique for constant weight diving is radically different than for finswimming, and it was simply that no one knew how to use the monofin for deep diving. Eventually I came up with the ‘back-drift’ technique which I used to finally break the record, and today other divers like Samo Jeranko have rediscovered this technique to take full advantage of the monofin for deep diving– but my point is that even 15 years after the first monofin depth record, people are still discovering new and more efficient monofin techniques.

The same is true for the Orca fins. When I first tried the original Orca, I felt it had potential but it did not work as well as my monofin. It was not until several months and hundreds of dives that I began to learn the correct technique, and even today I still have not mastered it. Now with the Orca Mk-2, the stronger backstroke and increased overall power, combined with better power transfer to the fin and improved streamlining, all affect the ideal technique, so I find I still have years of work to do to harness the full efficiency of the device, even though it already (for me) is working better than any monofin (including the old Orca).

My diving with the Orca Mk-2 has been primarily vertical diving. I am not much of a pool diver and I rarely if ever do dynamic apnea. Most of my diving has been in the cold waters of Vancouver with a 7.5mm suit and heavy weight belt. I have been down to 53m in cold water with the Orca Mk-2 so far. I also did many dives with it in the Caribbean, but only to a maximum of 20m. Nonetheless in all recreational diving conditions I find that I am coming to the surface with more air left than I expect, as I have ‘tuned’ my dives for the earlier version of the fin, and with the extra power and efficiency I simply have more air left at the end of each dive. In 2012 I did a 60m recreational freedive with the Orca Mk-1 and I felt that was about my limit with the heavy wetsuit and no descent line. I do feel I can go significantly deeper with the Orca Mk-2, and time will tell how deep.

It is also clear that this fin is the best candidate to set world records in constant weight, and it is only a matter of time before a depth record is set with it.

Like the original Orca, the Orca Mk-2 can be easily disassembled to fit into a suitcase, saving on excess luggage costs. The polycarbonate and metal design mean it can last much longer than a monofin, as monofins are glued together and glue eventually falls apart.

Fin buoyancy is a critical aspect for deep diving. The original Orca Mk-1 was significantly negative, which I did not like, so in 2011 I modified my Orca Mk-1 by filling it with hollow plastic spheres, creating 880g of net positive buoyancy. This is a lot of buoyancy and the buoyancy does *not* change with depth like a monofin, so it is much easier to stay vertical during the free fall on deep dives. Ron has added intrinsic buoyancy in the Orca Mk-2 with a solid piece of buoyant wood sealed against water ingress. I’d estimate the Orca Mk-2 has about 300-400g of buoyancy. I find the buoyancy to be perfect for recreational diving with moderate surface swimming. For competition diving I would prefer around 800-900g of buoyancy, but adding that much buoyancy makes surface swimming a bit harder, so less ideal for recreational dives. The Orca Mk-2 can be disassembled to modify the amount of buoyancy in the fin, to switch between ‘recreational’ and ‘deep diving’ configurations.

This may be slightly off topic but the capacity to have up to 900g of buoyancy in the fin is extremely important for deep diving, not so much because of the added stability, but because of a decrease in the total energy required to perform a deep dive. William Trubridge and others have calculated the energy curve vs. buoyancy and in all cases even a diver with *no* weights is still too negative in the deep phase of the dive, and wastes a lot of energy because of that. Seals have a terminal velocity of 0.70 to 0.80m/s on deep dives, and we should aim for something similar, so if you are sinking at 1.0m/s near the bottom you are too heavy, even with no weights. Wearing a thicker wetsuit does not fix the problem because the wetsuit only adds buoyancy in the shallows, not at depth. The only solution therefore is to add incompressible buoyancy– but where to put it? The answer is inside the fairing of the fin, which is where the Orca Mk-2 excels, and thus by doing so you have added stability in the free fall and you lower your terminal velocity to 0.80m/s, and dramatically lower the total energy required for the ascent, increasing your maximum depth potential in the process, first by decreasing the energy lost from negative buoyancy, and second, by adding propulsion efficiency via a fin that is simply more efficient than any monofin (once correct technique has been learned).

The writing is on the wall and the days of the ‘Andronov’-style monofin are numbered.

You can see a video review of the Orca Mk-2 here:

Next up in the article series is the review by Connor Davis.  Connor is a phenomenally competent and very experienced spearo and recreational diver. Just being in the water with him makes you feel safe and comfortable.  The fin he’s using is a predecessor to the Dol-fin line’s recreational flagship – The Pilot. This fin is aimed at the recreational market and competes with bi-fins and entry-level monofins like the Waterway Nemo and Lunocet.