When determining your next scuba trip destination, there are several factors to keep in mind. One, does the location provide ample underwater scenery and critters to be worth countless hours of travel to your destination of choice? Two, is the destination affordable enough not to refinance the home for the fourth time? Three, are there activities above water that can be enjoyed while off-gasing? And four, does any of this really matter as long as you’re getting out of the hustle and bustle of the nine-to-five and entering the hustle and bustle of a coral reef? If the answer to all of these questions is "No," and for that matter, if the answer to any  of them is "No," then stop reading right now. Find yourself an online Sudoku magazine to entertain yourself. If the answer is "Yes," then you are probably envisioning a past or potential future trip to Fiji.

When my recent motley crew of Scuba junkies and I were plotting our latest adventure, one of the destinations that kept popping into my mind was Fiji. Mind you, I was not preparing for my honeymoon, nor am I a shredder of waves (isn’t that what the surfers call it?). Rather, images of orange Anthias orbiting the soft coral of the Rainbow Reef seemed to be beconing me from somewhere far off into the exotic waters of the Pacific.

Surely you’ve spoken with someone who has been fortunate enough to travel to the magical islands of Fiji. The majority of Fiji alums will start their story with a heartfelt "Bula." The stories often involve memories of brilliant colors above and below the water, and the wonderful people they met on their vacation. Perhaps a tear may roll down their cheek as their mind drifts off to that happy place.

Anyways, I had to find a way to get there. Fortunately I came across a great article in Rodale’s Scuba Diving magazine in which readers rated the top diving destinations around the world. Seems this little resort on Taveuni Island in Fiji came in first for the Reader’s Choice Award of 2002 for best value as a resort worldwide. Well, if "affordability" doesn’t happen to be my middle name! I had to check it out. The name of this little resort is The Garden Island Resort, situated right smack dab next to the famed Rainbow Reef and Great White Wall. This was going to be perfect!

It was easy enough arranging our travel details as they were included in a travel package put together by Aqua Trek (Aqua Trek is a Scuba Center that bought out Garden Island Resort several years ago). Since our group of four hadn’t traveled on a package tour before, we were a bit wary, but didn’t need to be. The excellent reviews were right and friendly people made it smooth sailing. In fact, we caught a direct flight from LAX to the city of Nadi. From there we jumped on a small, but sufficiently sized island hopper to the palm tree-lined runway of Taveuni Island. Here, however there are some great highlights of the natural waterslides. 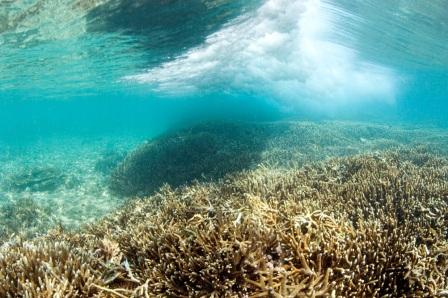 Fiji is a nation comprised of approximately 300 islands, each with its own unique beauty. Taveuni, which is known as the Garden Island for its rich flora and fauna, is Fiji’s third largest island. The first being the main island of Viti Levu, where Nadi is located, and the second, Vanua Levu, which is separated from Taveuni by a strait of water known as the Somosomo Strait. The Somosomo Strait is where the Rainbow Reef is located.

Fiji’s soft corals are legendary among scuba divers. A combination of warm, clear and nutrient rich water as well as steady supplies of swift currents make this environment perfect for the soft corals Fiji is famous for. When the current is strong, the soft corals open up to feed and that is when the kaliediscope of color unfolds. Every color of the rainbow seems to be represented in translucent formations, hence the name.

The Great White Wall is another wonder of this place. It is named for the pale lavender soft coral that blankets it. This site begins by dropping through a tunnel that starts at 30 feet and exits onto the wall at 88 feet. The wall continues below for another hundred feet or so. With the vast amount of white coverage it is easy to imagine diving along some eerie glacial form. 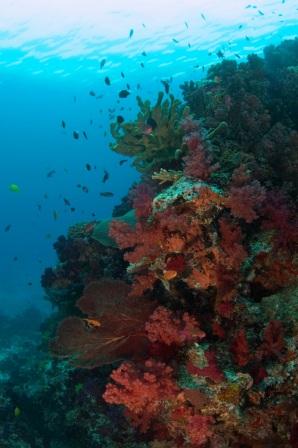 The usual suspects we saw on most dives, and you are sure to find here as well are Blue Ribbon Eels, Clownfish, White-tipped Reef Sharks, Lionfish and Garden Eels. The locals report occasional sightings of Manta Rays as well as larger species of Shark, however we didn’t see any Mantas during our trip.

For above water fun try out the natural waterslides located within walking distance of the resort. We were told local kids frequent the spot, but were disappointed none appeared the day we bruised ourselves silly testing the waters. Oh, and watch out for squashed toads.

Apparently the Fijian variety have a propensity for finding themselves under the tires of moving vehicles. Also within walking distance is the old site of the International Date Line. Originally the Date Line passed directly through the island. You can imagine the confusion this must have caused. In fact, lore has it that a man ran who ran a plantation on the island got his employees to work 7 days out of the week by pointing out that while it was Saturday on one end of the field, it was still Friday on the other.

Be sure to try the Kava, a drink made from drying and pulverizing the pepper root. The locals swear by the stuff and say that it calms the body and prevents hangovers. The only thing I noticed was a slight tingling of my mouth. Although we were assured it was perfectly legal to bring into the U.S., we were thrown off a bit when our Taxi driver offered to sell us some bags on the sly en-route to the airport. 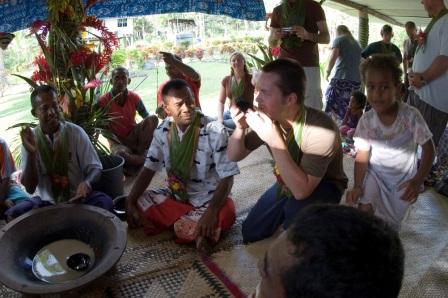 Drug deals aside, Fiji is a magnificent location for a scuba trip. The people we met were the nicest you could possibly imagine. Even walking down the street into town perfect strangers would look you straight in the eye and shout "Bula" with a smile. The time to go seems to be July as it is toted as the driest month.

Visibility tops 100 feet between June and October, however, Fiji is a year round travel destination. Be prepared to be stunned by the colors below and above the water and practice belting out a hearty "Bula" before you go! 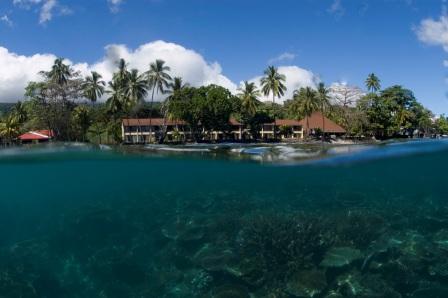