How do you find someone with a hidden talent for freediving? This was the challenge set by TV series Hidden Talent, broadcast in the UK in May 2012. I had been approached to be one of the ‘experts’ for the series, amongst eight others including climbing, lie detection and opera singing. I was told that I would be given around 900 people to pick from, but that none of them could know what they were being tested for. This was compounded by the problem that I had to get through 20 people an hour and nowhere near water… 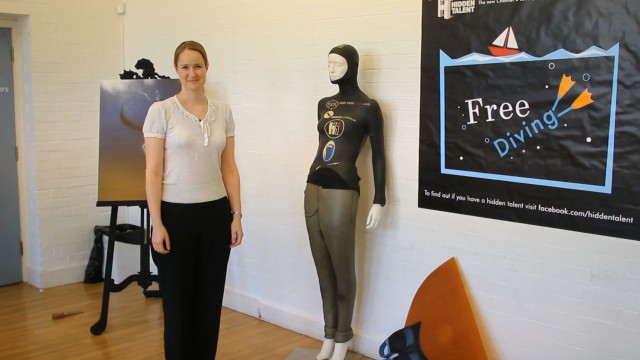 Based on my years of teaching and working with athletes across many disciplines, not just freediving, I had a pretty clear idea about what I was looking for. I knew a certain age, physique, aptitude and attitude made a good freediver. However, thanks to the Hidden Talent’s producers’ pursuit of a cross-section of the population, there were only two candidates that fitted the image in my head – yet neither of them became the final winner.

The final candidate was chosen after the initial test day, a day at Crystal Palace pool, one day in the lab at Bedfordshire University with Peter Sheard and then two days at Vobster Quay doing physical tests in the water and psychological tests with two psychiatrists out of the water. It was as rigorous as TV scheduling would permit and gave me a chance to put my theories into practice.

So, I’m in a room with twenty people, none of whom can know who I am or what they are being tested for. They’ve filled in two questionnaires, the  first a medical one, the second one written by me to specifically to address any other issues that might affect their ability to equalise, such as facial trauma, persistent sinus congestion, their swimming ability, whether they suffer from any phobias that might affect freediving and if they consider themselves a competitive person. Meanwhile, my assistants and I (all freediving instructors) assessed their physique and preparing to mark for each candidate the results of their ‘hum’ test.

The hum test is the quickest way to see if a person is likely to find equalisation very easy. You hum and move your jaw forward and to the left and right, and if the Eustachian tube opens then the hum gets louder in one or both ears. I was looking at a very short time frame to train someone up to be a good freediver and so I had to pick someone for whom equalisation was not going to be their biggest challenge. Whilst I explained the test, my assistants were going through each questionnaire, making piles of ‘yes’, ‘no’ and ‘possible’ candidates. The great thing about the fact that people didn’t know what they were being tested for was that it was very easy to get a genuine answer. In fact, many people thought it was a singing test so their hum was very operatic!

At the end of the hum test we had an average of two people out of 20 who could perform the test and who also were suitable based on the medical questionnaires. The suitable candidates then took it in turns to perform an apnea walk with a heart rate monitor on to measure their breath hold and their mammalian dive reflex. They relaxed first whilst sitting down as I talked them through relaxed breathing and a final breath. They then held their breath seated for thirty seconds and then stood up and started walking whilst still breath-holding, until they couldn’t hold any longer or were stopped by me.

The TV production company were determined that what we were doing should be as measurable and demonstrable as possible. It was for this reason that they were so keen to involve Peter Sheard, who has so many years of working in sports science and at the cutting edge of freediving research. This was fascinating for me as I was taking people through the apnea walk who, prior to that moment, had not even heard of freediving before. It was also a chance to get to know them briefly as people and see if they had what it takes mentally to devote the next few months of their lives to the sport.

After the three test days in Birmingham, Manchester and London, I chose twelve candidates to take to Crystal Palace pool in London for their first experience in the water. The first test was a static session with a series of four breath holds, again with the heart rate monitors. This time we were not just looking for how long they could hold their breath for and signs of strong bradycardia, but also if their urge to breathe became later with each hold and how they reacted to the pressure of the situation. It was an intense experience and one that many candidates found very difficult. I often joke that freediving is ninety percent mental and the rest is in your head and this test proved it. All of the candidates had something in their lives that affected how they thought about themselves and holding your breath is a great amplifier of emotions and fears. Although I had no intention of letting any of them even approach a hypoxic fit, their fears and those of their families and friends still remained.

After this test I then took them to the dive pool to see how their equalisation worked and this was for me one of the most stressful moments – would the hum test translate to an actual dive? Thankfully the answer was yes and many candidates managed to equalise hands-free, enjoying the experience far more than the breath holds. After this they were given long fins and practiced short dynamic apneas for me to assess their style and how quickly they took direction and improved their stroke. This was amazing to see as it was clear the candidates who just couldn’t feel what their body was doing and adjust accordingly and made it yet another part of my decision making process.

After the day at Crystal Palace I was left with six candidates who then spent a day with Peter Sheard in his lab before coming to Vobster Quay for the final two days of tests. They were evaluated by two psychiatrists and spent the rest of the time in the water, learning how to duck dive and fin, seeing how easily they learnt and how comfortable they were in the water. The intensity of the situation, amplified by the need of the production company to get the shots they needed to tell the story, meant that relaxation was not easy and emotions ran high. There were tears of frustration, tears of elation, and the undercurrent of competition as they knew the decision would be made to choose one person over all others.

The final candidate was chosen for their overall performance, their results in the lab with Peter Sheard, the evaluation by the psychiatrists and their personality – did they have the right attitude as well as attributes to a be a freediver. Because it was a television show choosing from a broad segment of society who had no prior knowledge of what they may be tested for, I was never going to get a group of people that to me would seem natural freedivers from the beginning. However, what the process did show me was that we should never allow our preconceptions to blind us to people who would make amazing freedivers. I was reminded at every stage that the limitations we set ourselves and others just simply don’t exist if we have the courage to go beyond them. Almost anyone can learn to freedive and my sincere hope is that this show will encourage people who would never previously known about it or considered it for themselves to get involved in our wonderful sport.

Hidden Talent premieres at 9pm on the 1st May 2012 on Channel 4 followed by a live web chat with Emma Farrell. The freediving story is also followed up in episode six to be broadcast on the 29th May at 9pm. You can find out more and try some of the tests yourself at http://www.channel4.com/programmes/hidden-talent