Four hours south of Cancun, a town called Bacalar. That was where we were headed. There was to be a lagoon of seven colors andnearby, a cenote where a freediving competiton called Xibalba 2008 wouldbe held. We’d arrive a few days early toget some training dives in and see what the hell a cenote is – there’d been no briefingabout our destination or this cenote thing.

We all had our own ideas.

Me, I wasn’t sure about the competition part, but I wasup for some travel and definitely down for some freediving. “Sure, I’ll go.”, is what I remembersaying a couple weeks before our dusty blast down to Bacalar. I’d taken the FIT Level II course with Martin Stepanek back in March, and had done some dives in since then. Got toknow the FIT crew and dove their practice float with a few otherLevel II classes.

Martin was in the car, too. So were Niki Roderick, MikeAntinori, Brett Scaglione, and Lauren,my fiancee. We made a few stops to get fresh pineapples and confuse the localswith our questions in Spanglish. The ride didn’t seem too long but even so itwas after dark when we got in. 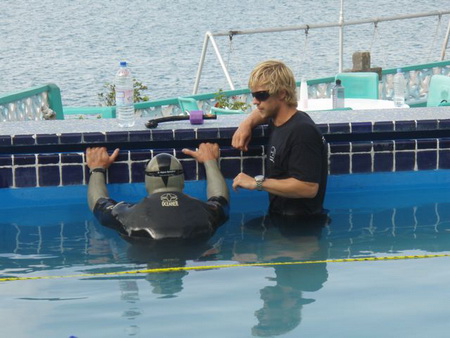 In the morning wewent over to the cenote. It sits right bya long lagoon. The lagoon’s brilliant incolor, like Bahamian waters, and was once a channel for pirates and invaders. The cenote was far bigger than I’d imagined,arena sized, and all it needed was Parthenon-style bleachers. It sat below a festive restaurant surroundedby trees, so you couldn’t see the more brightly colored Laguna de Bacalar. The cenote’s water looks like typical lakewater, but clearer, and it has a greenish tint.

We suited up,swam some floats out and started to figure out kick cycles and how much ballastwe’d need. It was fresh water. We settled on no weight at all, or much less thanin the ocean. The visibility at thesurface was limited to about 5m, but as one descended the light dimmed even asthe water became clearer, with 8-10m visibility that changed day by day… 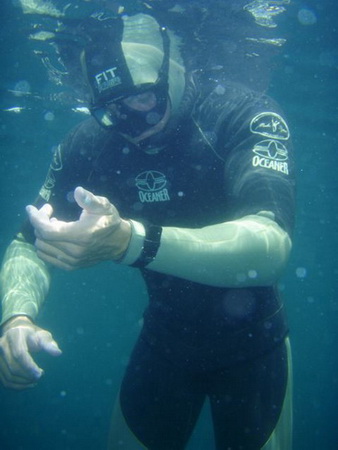 I established ageneral warmup routine and acclimated to the fresh water and the cenote environment. An easy first dive, after our travel day, tomake sure all systems were functioning. Over the next couple of days we’d dive progressively deeper, to targetdepths, and practice competition moves likegrabbing the tag and doing the surface protocol. Martin coached us through the unknowns, guidingus with his experience. I noted thatAharon and MT Solomons and Julie “Jewels” Russell, competitors all,were diving a line nearby.

Brett and I sought and located a balance point in theprocess, incrementally dropping the target depth, practicing technique but leaving some room for those competition nervesthat would burn more energy later. Wefocused on the diving, and when game day came we announced depths that we’d already reached.

And game day dawned. I wasslated for my Static Apnea performance on Day One and for Constant Weight on Day Two. Brett and Mike drew the opposite order ofbusiness.

The Static disciplinewas sited at the Hotel Laguna, on theway from our digs to the cenote. The hotel is perched on a hillside thatoverlooks Laguna de Bacalar. It didn’tfeel like Mexico – more like a Greek scene. The hotel was simple andhad a pool well enough suited to the Staticevent, cordoned into ample sections forwarm-up, competition, judges and spectators. 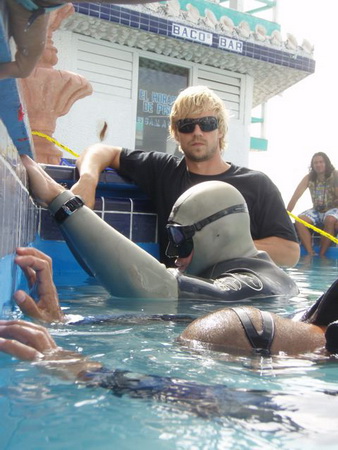 My original and primary reason for coming to Mexico had been the depth disciplines. I just wanted todive. The experience of competing in theStatic discipline was, happily, moreexciting and productive than I thought it would be. Martin had wisely counselled : Take the opportunity to compete, get experience and learn from the Staticevent. I’d done a target static inmy FIT Level II class and then one other after that. I had a lot to learn.

The event clock started. We competitors went through our warmup holds, working toward the official top time. Ah, something new, again, and rather cool in my view: the programmingof a warm-up routine, calculatedbackward from top time. Lesson learned.The countdown to top time, whether for pool or depth disciplines, is a framefor tweakable warmup programs and thetweaking makes a difference. It made adifference this time, alright.

My static hold felt good, overall, though the onset ofcontractions and discomfort came sooner than it had in training. I’d announced a time I knew I coulddo, though, and so rode out the ups and downs and got beyond it. The white cardlooked good. I paused to memorialize the feeling, and the record of key factorsleading up to it: the previous day’straining, that morning’s activities, my breathe-up, and the early contractions. Grist for the mill. Data, with which toreprogram for a better result next time.

Sweet! On to the cenote and the depth disciplines.

Michael Antinori -known as Don Miguel in Bacalar – was thefirst Constant Weight performer to surface clean. Mike was super happy, and very grateful to his rival Luis, the Mexicanchampion, who’d lent him a monofin. Mike had broken his own the day before thecompetition.

I watched his warm ups and observed as he made his way out to thecompetition float. It was a gooddistance away from the three warmup floats, but the cenote was flat, with nocurrent. I was probably more anxiouswatching Brett than I was later, performing. I wanted Brett to get his tag and have a good dive. He did. It was great seeing him swim in with the tag after a solid dive.

Later that evening, I found out that my top time the nextday would be 1:11 PM, so I satdown and figured out where I needed to be and precisely when. I mentally reviewed everything we’d done in training and thought about how I wanted the nextday’s dive to go. 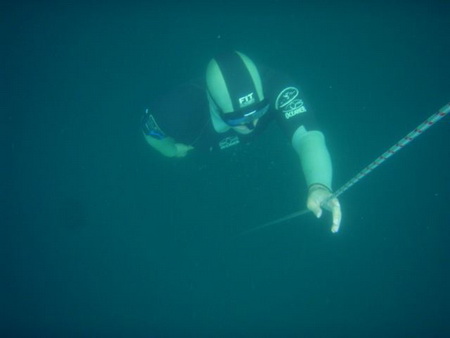 Morning came soon enough. I relaxed while Brett and Mikewent to the static pool. They bothsuccessfully reached their announced times and so won valuable points.

Soon after their return, we all made our way over to the cenoteagain, and hung out around a table in the competitors’ tent. It was a good group to hang out with – peaceful,but we joked around a lot. Martin chattedwith me just to keep things normal and check where I was at, you know – nervous, ornot. He began on a positive note observing that it was good I got to do mystatic performance first so thatpresently I could end things well afterthe other successful dives… and then interrupted himself: “…actually, am I making things moredifficult ..?…and adding pressure? Well, that’s just my style of coaching!” It was comical rather than distracting, andit actually took the edge off. It wouldsoon be time to suit up and get out to the warmup floats.

Martin accompanied me to the practice lines and I beganmy warmup dives. Things felt good and Iwas focused on the breathing and on the water below. I was able to tune out the techno music that blaredfrom nearby loudspeakers.

The routine took over and I was enjoying being in thewater. Although I was mentally calm, there were physical nerves and a slight edgeto knowing this dive would count a little more. It was a good feeling and made me want to do the dive smoothly and get thetag. After the warmup we made our wayout to the competition line. I breathedup, clicked the lanyard in, listened for the countdown, timed my last inhale,then silence….

Water entry, kick cycles, sink phase, equalizing,everything felt calm, slow, silent. As I’ve been diving more, I’ve been feelingless and less tension and pressure at depth. The body can definitely adapt and change. Enough time went by in the sink phase, so Itilted back just a little and looked to see the bottom plate. There was my tag, so I waited to make sure Iwas within 1.5m of it to grasp the lineand reach for the tag. I pulled it fromthe plate and watched the rubber band break, then extended that hand above my head andstarted my ascent. I stayed relaxed,though a little more excited with a tag in my hand, while I kicked back to thesurface. After surfacing, taking somerecovery breaths, and completing the surface protocol, I was real happy to seea white card and have completed my first dive in competition. I swam away from the float towards shore and let things sink in.

Its such a good feeling when any dive goes smoothly, and you progress in your freediving, but thisone had a tag, too. After swimming backto shore, Martin and I enjoying thepositive outcome, my friends came up and were real happy for me. As I walked back to the tent Don Miguel came over andsaid, “Dude, you got second!” I wasalready happy about the dive and how things had gone, and now second place too. Sweet! I almost didn’t believe it. 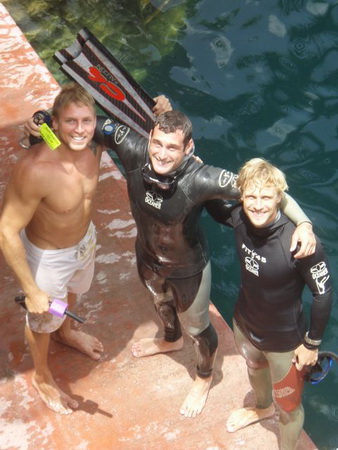 I can truly attribute the enjoyment and success I havefound to Martin and the FIT crew. I enjoyfreediving immensely and now the competition aspect has enhancedeverything. Find a competition and diveit. You’ll have fun.

Dawn Wright Featured on Dive In With Liz and Sylvia Podcast