Freedive-A-palooza: noun. slang. an extraordinary gathering of freedivers in the Midwestern part of the United States.

Wisconsin doesn’t bring to mind the images of freediving that most people usually associate with the sport; sleds, spears, and skin-tight suits. Even though our Dairy State is blessed with some 15,000 inland lakes, and is bordered by two of the world’s Great Lakes, Michigan and Superior, people just don’t think about Wisconsin when someone mentions freediving. Because of this, finding buddies to freedive with around these parts hasn’t been the easiest thing to do.

Enter Deeper Blue. Thanks to this website I started emailing Fred Johnson (fsjohnson) a few years ago. He and I corresponded quite a bit, trying to find a spot somewhere in the middle for us to dive; not as easy as it sounds since Fred lives two states away in North Dakota. Finally, last year, we just decided to plan a date and go diving. Fred checked his calendar and found a nice time right in between planting and harvesting his crops. The date was set as the third weekend in July and the place was Lake Wazee in western Wisconsin.

Since we had a date and a lake lined up we decided to invite all of those other freedivers that we have bumped into or emailed over the last few years to join us. Realizing that we both had small dive lockers of gear to outfit anyone who might come along, we decided to turn it into a freediver demo day, similar to the DUI drysuit demo days that are held in a variety of locations around the country every year. The idea was born and all we needed was a name. Since this wasn’t to be one of the normal freediver gatherings, like a depth competition or a spearo tournament, we opted for the name Freedive-A-palooza a unique gathering of freedivers. 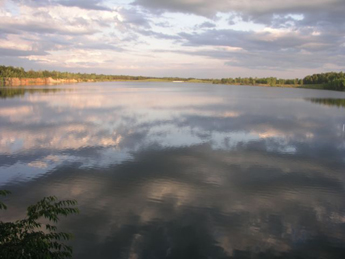 Lake Wazee is a rare jewel of a lake that one wouldn’t expect to find in the middle of farm country. It’s actually an old iron mine that has slowly filled up with cold, clear ground water over the past 20 years. She is 100 meters deep and has exceptionally good visibility: over 100’ b in winter and a good 60’ in summer, if you drop below the thermocline. She is located less than 3 hours from Minneapolis and a little over 5 hours from Chicago. As a result of this she draws tech divers from at least five surrounding states to practice their craft. In recent years she has also started to attract a few freedivers as well.

During the months leading up to this weekend we gathered up as much gear as we could. Additional gear was sent in from Estonia thanks to our man Jyri- big props to Jyri for trusting some of his finest blades to a bunch of unknowns on the other side of the world! Sven had planned on coming, but had a last minute job come up and couldn’t make it. Being the ‘Sultan of Smooth’, as he is so well known, he did manage to send us his beloved Special Fin’s Hybrids, which were wrapped up in enough bubble wrap to raise a small boat when they arrived on my front doorstep. Bonus smooth points to Sven for the effort, and expect me to ship those things back to you shortly. OMER had planned on sending some things, but the mail got mixed up and they came in a day after the event ended. Thanks to Mark for good intentions, but I think we had a pretty good OMER representation there anyhow. Add in Spearguns, kayaks, surf skis, wetsuits, the beloved scooters, and you have Christmas in July! 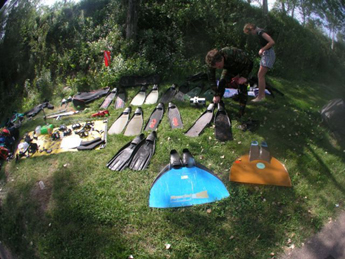 Things started off great on Friday afternoon with some of us arriving early and getting a jump on the weekend with a nice dip in the water, immediately followed by at least one PB- it was a great birthday present! Water conditions were great. Surface temps were hovering right about 72 degrees (F) and extended down to 25’ . After you busted through the thermocline they dropped to around 40 degrees- which was actually much appreciated on a hot July afternoon. Below 80’ the water opened up to at least 50’ of visibility!

That evening more freedivers and scuba divers joined our little shindig. We now took up two group sites and enjoyed a great night of swapping stories, eating brats on the grill, and imbibing in Wisconsin’s other prized beverage. Eventually the fire died down and it was time to rest up for a big day ahead.

Saturday morning had me up at 6 a.m. so that I could jump in the lake to start setting up the target range. We ended up having a very sweet little range in 10’ of water with a sand slope back drop to stop any wayward spears. It was complete with waterproof measuring tapes anchored to the bottom to gauge the distance on our shots. It’s truly amazing how much you can learn about how your speargun(s) shoot by spending a little time at the target range. Now I can hardly wait for my next time out to do some real shooting. 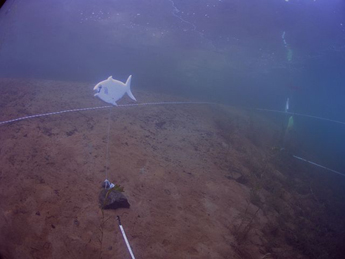 Other divers started rolling in around 9 a.m. We had plenty of gear lined up for them to try. We ended up with a solid core group of 12 freedivers and generated a lot of interest amongst the scuba and tech divers who were also calling the lake home for the weekend. Some of the scuba divers even wanted to know which side of the lake we were going to be diving on Sunday so that they could plan their own dives around watching us!

The day progressed with the divers working their way out to the 30’ and 75’ platforms. More than one freediver set a personal best that day and it was all done with plenty of support that makes an event like this so much fun.

Saturday night turned out to be a real technical achievement as my trimix buddy, Gert, put all of that technical know-how together and set up a drive-in theater in the middle of the campground. There could only be one movie choice for such a gathering of freedivers, thus, The Big Blue was all set up for a sunset screening.

After another late night at the movies morning came far too early as some people from another campsite decided to wake us all from our slumber at precisely 6 a.m. with some really loud Mariachi music. Fred is the only one who slept through this as he packed along ear plugs to wear while he slept- that guy is always thinking.

As the morning fog burned off the lake we all decided to try a different entry spot that provided easier access to greater depths. This proved to be very advantageous as it allowed Fred to finally break that 100’ barrier and allowed me to set another PB- the second in three days for me. Next year we decided to bring in our own long ropes, instead of using the existing mooring lines, to push ourselves even dee

Things weren’t all about depth on this day though, as there were also many nice fish cribs to explore in depths of 10’ to 20’ of water. Fred, and his brother, Manley, managed to pack some scooters along in the back of their fifth wheel camper that they drove in. We all had a great time practicing our loops, spins, and rolls . My friend Jitka and I also decided to dive bomb some of our tech-diving buddies as they were doing their deep gas switches on the line. Since all of this was caught on video I am sure that we will see another top-notch music video coming out of Ted’s (unirdna) production facility shortly. 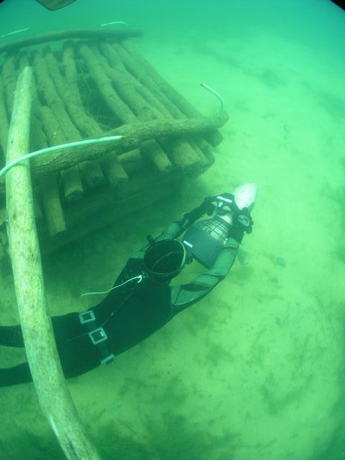 All too soon the weekend came to an end. Everyone there had a fun, safe, time. Many scuba divers came up to talk to us about courses, gear, records, spearfishing, and all the rest of the things that encompass this great sport of ours. Some stopped by after watching The Big Blue, from the comfort of their own campgrounds the night before, with lots of interest in freediving, but too late to be able to jump in and join us, at least for this year.

We are already planning on a repeat for next year. Next year will see more divers and lots more toys.  The USAA has also been talking about setting up regional competitions and were wondering about working that into the weekend as well. There’ is still a lot of legwork to do before we can pull off something like that, but were at least halfway there, seeing as how we have the lake and plenty of deep support divers to draw upon. Now, we mainly need to work out insurance and judging for the event.

I just want to give out a, final, big thanks to everyone who helped put this together:

-Sven, for the use of his prized fins even though he couldn’t make it.

-Jyri, for sending us free demo fins all the way from Estonia.

-Mark, for trying to send us gear.

-Deep Blue Adventures, for supplying the kayaks, and the outdoor theater system.

-To everyone who drove hundreds of miles just to meet other freedivers from the Midwest.