Freediving World Champ Alexey Molchanov in His Own Words 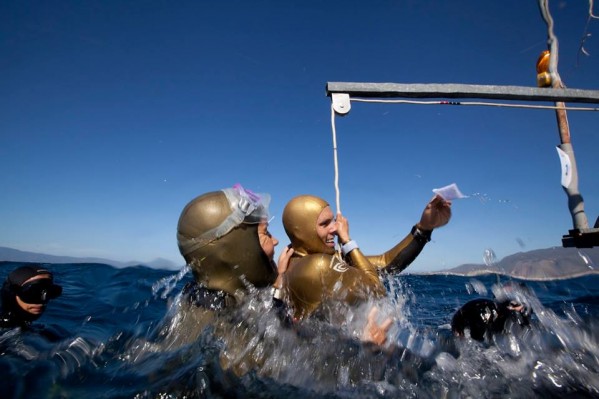 “Today was an interesting day. My very first “World Champion” title!” exclaimed Alexey Molchanov on Thursday, September 19th, 2013 – the day that 26 year old Russian freediver set a new world record to 128 meters in the freediving discipline of constant weight (CWT) with a dive time of three minutes and :38 seconds, at the AIDA individual depth world championships. See some video of Molchanov’s dive here:

“But let me give you a full play-by-play by going back to the Kalamata mini competitions — particularly on Friday the of 13th September, which I can for sure say was the date that almost ruined the world championship for me. For the first time in my life I experienced a reverse block on my way back from a practice dive to 128 meters; it started at about 110 meters causing me a loss of orientation and I began swimming in circles around the rope — at some points even going down instead of up. This unfortunate dive ended with me experiencing a dangerously deep black out and very big lung squeeze — probably biggest in my life. The extra amount of time I spent at the depth, around 100 meters, was just way too much.

Anyway, I did everything I could to physically and mentally recover — resting up until September 19th. As you can imagine, it is not very easy to do a repeat dive to the same depth after such a stunning accident. I am extremely happy I was able to complete a clean dive with success just 5 days later.

When I assess what happened today, I have to say that the day (of my successful dive) was not smooth at all. For starters the water temperature dropped 2 degrees compared to the previous week, which meant that most of  the “sensitive to cold” freedivers were freezing before their dives even started, in their 1.5 mm suits, myself included! Secondly, the ocean waves were big which made it really hard to stay calm on the surface. And lastly I hear that I might be protested on my surface protocol?! I still do not know if there was a reason for that, after getting a definitive white card from the judges. But I personally believe that if the performance was good, and the record was taken rightly, it is not a good thing for another person to do — that is to try and squeeze in a higher place by protesting against a fellow athlete. I am very happy to say that my top athlete friends share this same point of view. And it makes me believe that rules of fair game and sportsmanship are important here in freediving!”

Alexey’s mom, Natalia Molchanova, was also obviously thrilled with the historic performances by her family and had this to say:

“This was a day to remember. I suspect that it is relatively rare in sports to happens, but it did. Imagine that my son, Alexey, and I managed to, both, take first place on the same day at the World Championships in the “blue-ribbon” discipline, Constant Weight. To see Alexey and his white card after his New World Record dive to 128m was a very happy moment that I will carry with me forever.”