[Editors Note: This is Part I of a 2 part series. Join us next week as we look at IHT in practice and see Mark’s final results.]

A couple of months ago I was introduced to the world of freediving when I met Mark Harris. Mark has the extraordinary ability to hold his breath for an astounding six and a half minutes. His current diving record put him among the top 3 in the UK. I found it hard to believe a man with a normal sized chest could achieve such feats. I looked for the telltale signs of gills behind the ears, but found none.  Mark clearly was in complete tune with his body, enabling him to push it to the edge, physically and mentally.

As an athlete myself I’ve been involved in a variety of extreme sports, and so I thought I could help Mark take his discipline a step further. I run The Altitude Centre, based in London, that helps athletes get more from the air they breathe.

I told Mark I would help him improve his apnea times without having to lift weights or run around the park. All he had to do was make himself available for an hour a day over a 3-week period. This obviously interested him; he was keen to learn how we could improve his performance without doing vigorous exercise. I explained it would be like breath-holding, but without the discomfort of associated CO2 build-up.

The training Mark would be doing was Intermittent Hypoxic Training or IHT, a form of simulated altitude training.

Athletes have known for many years the benefits of simulated altitude training in enhancing performance. Using the principle of ‘live high, train low’, they have been able to perform better at sea level after their bodies have adapted to the reduced atmospheric oxygen concentrations found at altitude.

Today there’s no need to sleep amongst the native llamas of Peru to get these benefits. IHT takes a scientific approach, and brings the mountain to you in the form of a GO2Altitude® Hypoxicator (www.go2altitude.com). This special bit of kit extracts oxygen from the ambient air to produce hypoxic, or reduced oxygen air, which is then breathed through a comfortable oxygen mask. The process is very relaxing and people often read a book or magazine whilst undergoing a complete internal body workout.

Researchers have found the key to maximizing performance improvement lies not solely in the duration of stay at altitude or in the mode of acclimatization, but, too, depends upon the number of transitions “LOW – HIGH – LOW” and the magnitude of exposure based on the individual’s tolerance to the hypoxic environment.

IHT is unlike any other form of altitude training: it is based not on a set of arbitrary figures, but on a program tuned specifically to the individual, delivering precise amounts of oxygenated air through a set protocol. Careful control is maintained via constant monitoring of arterial oxygen de-saturation, measured by SpO2 from a pulse oximeter . This clever device simple clips onto a finger like a giant clothes-peg and measures the colour of the blood via an infrared light. Oxygenated blood is pure red, whilst deoxygenated blood has a blue tinge, as seen on the lips of very cold people or divers who have been down for too long.

More then 350 world-class athletes throughout the world are now using Intermittent Hypoxic Training and are seeing excellent gains in performance. Top freedivers Mandy-Rae Cruikshank and Ant Williams are amongst these top athletes who now incorporate IHT into their training routine, in this article we’ll see why.

EPO (Erythropoietin) made a bad name for itself when a minority of athletes took to injecting themselves with a synthetic form derived from cows, hoping to stimulate the production of the haemoglobin-carrying red blood cells. Haemoglobin is the precious molecule that carries oxygen to each of the estimated 10 trillion cells in the human body. 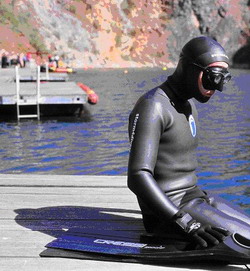 Injecting yourself with artificial EPO is very dangerous and is beyond the pale – unaccceptable conduct ethically and in terms of not being an idiot. The fact is, we produce EPO naturally and IHT has been shown to boost your natural production of EPO to safe limits. It is very rare for the level of red blood cells in our blood ( hematocrit) to exceed 50%, and readings above this level cause the official governing bodies responsible for controlling drugs in sport to get suspicious and start to do more intensive tests to see if artificial EPO has been administered. IHT naturally enhances your body’s own mechanisms to utilise oxygen more efficiently and it is unlikely to raise red blood cell concentration above this red-flag level.

[Editor’s Note: The deaths of several world-class cyclists have been attributed to artifical methods’s they’d used to boost hematocrit to truly extreme levels, in the 60%+ range. See last week’s article. This implies a blood viscosity something like that of toothpaste.]

The human body is very complex and not everyone adapts the same way to a course of IHT. Some people do not see changes in their EPO or haemoglobin levels, but still produce incredible performance results. Double-blind placebo studies have been consistent with the hypothesis that is not a psychosomatic response, but one which is due to complex adaptation processes affecting all areas of the body, right down to the sub-cellular level.

A lot of research is still being conducted on Intermittent Hypoxic Training, and across an expanding range of issues. For example, it is now thought to play a major role in combating oxidative stress.

IHT does not deny the essential role of oxygen in human life. On the contrary, it has been proven that hypoxic training significantly improves oxygen metabolism in the body. Transient lack of oxygen stimulates the pro-oxidant system by producing essential enzymatic antioxidants. Latest findings indicate that an imbalance in the capacities of oxidants and antioxidants plays a key role in the development of such degenerative diseases as asthma, hypertension, allergy, retinopathy, ageing, chronic fatigue syndrome, and cancer. Increased formation of oxygen free radicals during strenuous exercise elicits muscular fatigue and ultimately limits performance. Correction of this imbalance can be achieved by means of repeated short-term exposures to a mild hypoxic environment. IHT has applications in prevention, treatment and rehabilitation of many diseases and is very effective for the improvement of athletic performance.

Some purists might argue that IHT is an “artificial” way of improving performance, not in keeping with the sporting spirit. It is worth pointing out that IHT is completely drug-free and uses your body’s own natural ability to improve itself. IHT is no more un-natural than using fins to dive, or lifting weights in a gym. The benefits of altitude training can be obtained by anyone living above sea level, IHT just makes it more accessible. It is very democratic: one need not own a private airplane to make the altitude transitions on a daily basis !

Physiology and Psychology of Freediving

The physiology and psychology of freediving are complex and the subjects of ongoing academic study. Bradycardia, Peripheral Vasoconstriction, and Blood Shift- all important factors for freediving- are all linked to what has been dubbed the Mammalian Diving Reflex . But the most important factor, the one that concerns all freedivers and all living mammals is oxygen. We use about 550 litres of pure oxygen every day during the normal process of respiration.

Carbon dioxide (CO2) is one of the by-products of the metabolic process, but it is also the substance that triggers our urge to breathe. A delicate balance exists between the amounts of oxygen and carbon dioxide in the body. Small changes affect the acid balance of the blood. A buildup of carbon dioxide makes the blood more acidic, which releases oxygen from the haemoglobin. We maintain an equilibrium within narrow limits: the respiratory centres of the brain sense any shift in the blood pH and partial pressure of CO2 (pCO2) levels. When unusual levels occur, chemical receptors modulate the respiratory process to help return the pCO2 and pH levels to within normal limits. Freediving challenges the natural response by altering the partial pressure when diving to depth and by resisting the urge to breathe while enduring increased CO2 buildup.

Breath-holding, itself, is not surprisingly the most common technique used by freedivers to increase their CO2 tolerance and oxygen efficiency. There are two very different types of breath-holding:

When you breath-hold to dive to depth, the problem, paradoxically, is not too little oxygen, but too much. Only in the last few seconds of the dive, during the final stages of ascent, does your blood O2 drop below normal levels. For 90% of the dive, you have too much oxygen. At depth, hydrostatic pressure’s effects on lung volume and other parameters increases the partial pressure of oxygen in the blood. As you ascend, the ambient hydrostatic pressure decreases and so does the O2 partial pressure, while the CO2 concentration rises as a result of the effort of ascending. The changes happen fairly rapidly with the onset of hypoxia being quite sudden. This can result in the infamous shallow water blackout, suddenly, and without warning : why it is important you dive with other experienced freedivers.

Breath-holding in a pool or on dry land is different. In this case, the onset of hypoxia is more gradual. Oxygen feeds the muscles, detaching itself from red cells as the blood becomes more acidic. Carbon dioxide is responsible for changing the pH level of blood. Higher concentrations of CO2 make the blood less alkaline and thus releases greater quantities of O2. In practice, the build up of CO2 during a breath-hold enables normal oxygen saturation to be maintained for the first 3 to 5 minutes, depending on the person. It feels uncomfortable because the urge to breathe is triggered by the elevated CO2 levels. After this first phase, O2 levels start to fall (see Fig 1.). Freedivers have been known to take their CO2 saturations down to 50% and lower during competitions. 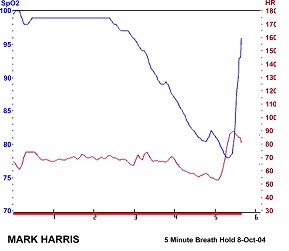 IHT takes a similar approach to the technique of apnea, the main difference being the absence of large concentrations of CO2 ,which stimulates the urge to breathe. IHT enables you to train your hypoxic adaptations in a comfortable way, with greater control and without the toxic build up of CO2 .

Breathing high concentrations of hypoxic air for a short period of time depletes the oxygen “cash reserves”, then always repays the small debt during a subsequent “debt recovery period” of ambient air. No long-term debt accumulates and the body is able to repeat the process many times, thus producing the training effect. The body adapts to cope with reduced oxygen by working more efficiently as it utilises less oxygen, and also becomes more efficient at dealing with the oxidative stress associated with intense exercise, stress or induced hypoxia by balancing oxidants with an improved antioxidant system.

[Editors Note: Join us next week as we look at IHT in practice and see Mark’s final results.]

PADI And Andy Casagrande Partner Up To Protect Sharks