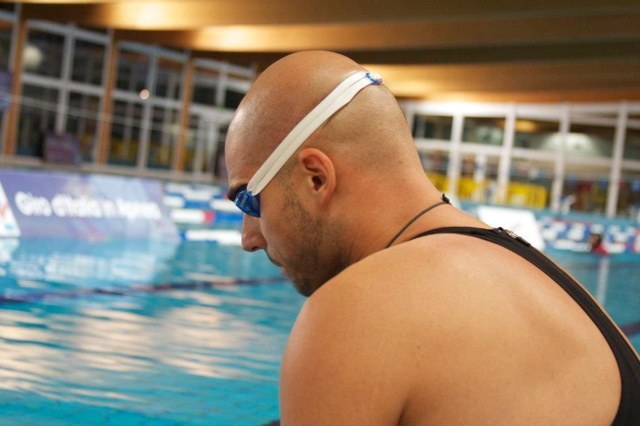 Ligano, Italy —  Thousands of apnea entusiasts tuned into the Evolutionchannel this morning to watch the highly anticipated final heats of the dynamic with fins (DYN) competition at the AIDA International 2011 Pool Championships. And the freediving athletes did not disappoint.

Goran’s performance surpassses the previous DYN world record for men by eight meters. (New Zealander Dave Mullins set the previous WR of 265m in September of 2010.)  An extremely tight field including Guy Brew, Mikko Pontinen, William Trubridge, Fred Sessa, Bjarte Nygard and Alexey Molchanova kept everyone guessing as to who might take gold for this discipline in the men’s finals. And the drama persisted as shortly after Goran finished his dive with a clean surface protocol, a safety diver touched him making the judges deliver an initial (and unfortunate) red card for his astounding swim. ?olak protested the red card requesting a review; consequently, in a show of solidarity all of the other athletes present also signed a petition urging the judges to reconsider. Goran’s protest was successful and landed him a white card, a gold medal and a world title.

An active member of the DeeperBlue Forums, ?olak has traditionally been involved in CMAS events; this Evolution Cup marks Goran’s first appearance at an AIDA International Pool Championship.