Guamania! Part I: Cuckoo for Cocos 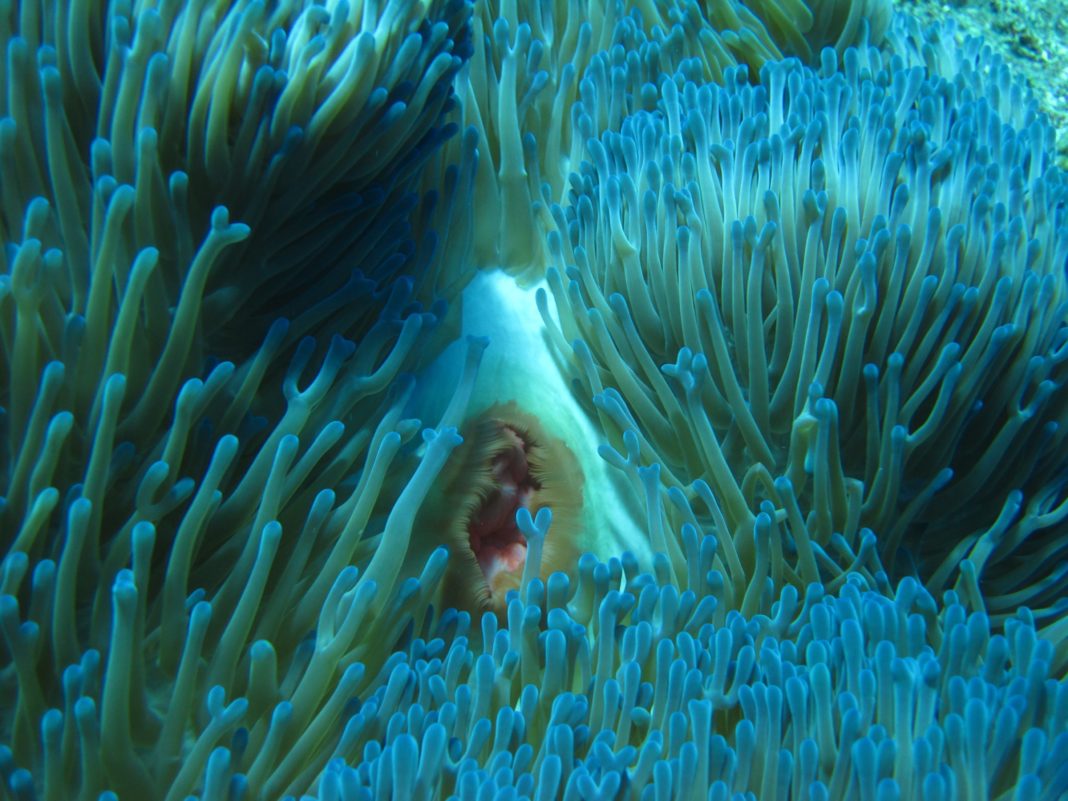 Precariously perched on the western lip of the deepest trench in the ocean is a little archipelago know as the Mariana Islands.  It marks the eastern boundary of Micronesia, with Guam seated at the southern end of the arc.  The island is thirty miles from end to end, but only twelve across at the widest point, ringed by sheltering reefs all around.  The Chamorro and their ancestors have been there about four thousand years, but more contemporary visitors include Magellan, the occupation-oriented Japanese during World War II and most recently, me. 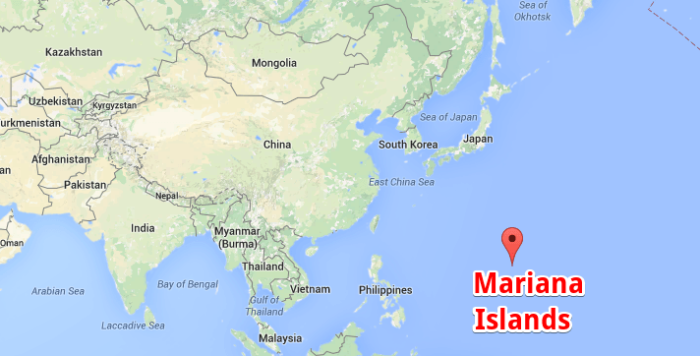 Three weeks’ exploring was just enough time to make it clear that even three months would be insufficient.  The leeward side of the island boasts dozens of great dive sites with eighty degree waters and nearly limitless visibility.  Boat trips are cheap, especially considering how much it costs to get fuel out to the remote rock.  On a particularly memorable day in late January, my hostess Elaine and I had a double-dip dive day, piggybacking a morning dive to Cocos Island on top of an afternoon excursion to another set of sites — Alutom and the Coral Gardens.

When you describe a visit to Cocos Island for the first time, odds are people will assume you went to Costa Rica, or maybe to Australia.  But there’s a third option, a mile-long arrow of land pointing southwest away from the southern tip of Guam.  Officially uninhabited by humans, there’s a day resort on the west side whose last ferry home leaves at 4 p.m.  Cocos is untouched by Guam’s invasive Brown Tree Snake problem, so it’s a refuge for much of the area’s ever-dwindling bird population.  We went there aboard MDA Guam’s Sea Fantasy, though, and didn’t touch a fin to dry land.

We departed at eight a.m. from Agat Marina.  After presenting our tickets to Captain Bob, loading our tanks and signing the roster, we stowed our dry bags and set up our gear, then headed out to the bow for some sight-seeing.  We were not disappointed. The ocean and sky welcomed us out into the early morning with a double rainbow that sank below the horizon as we watched.  I’m not sure there’s a word for the blazing golden aurora it trailed behind it–is rainbowset a thing?  Further asea, I spotted something silvery and sleek hovering just above the water between us and the distant shore.

Turning to my dive buddy Elaine, I asked, “Does someone on the boat have a drone?”  I was wondering if they’d let me attach my GoPro to it.

She laughed and turned me back to the water.  “It’s a flying fish!”

Sure enough, when I looked again the tiny, shiny spaceship resolved itself into an impossible little fish, gliding low over the waves.  Eventually it coasted back into the brine, but every now and then another would emerge, fleeing the churning wake and roaring engine of the dive boat. 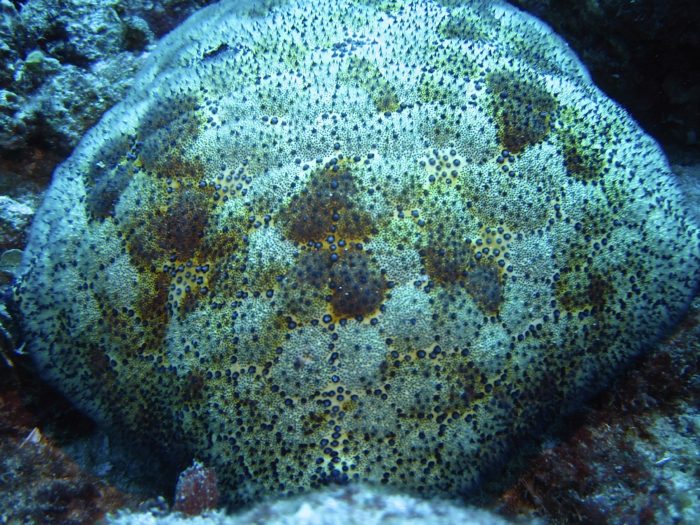 It was sprinkling gently when we arrived at the first dive site on the east coast of Cocos Island. Elaine and I timed our giant strides to coincide off either side of the dive platform so that we could stay together in the swift north-to-south drift.  The dive is characterized by a sloping wall that begins at about 70-80 feet with a steep drop-off to 200 feet.  The smooth rolling lip of the reef is broken by canyons and crags whose rocky faces reminded me of the desert landscape just outside my hometown, San Diego.  The visibility was practically infinite and we had dropped down to our limit of 125 feet almost before we realized it–the surface still seemed just a breath away.

The first face we saw in the neighborhood as we drifted by was a madly grinning moray, followed quickly by my first cushion star sighting.  Outsized and puffy, Culcita novaegaineae look as if they were once regular stars that got popped like popcorn, then painstakingly decorated in stippled mosaics.  Crown-of-thorns starfish and tiger cowries were tucked in among the different types of branching corals and mounts of brain coral that sped past, garnished with at least four different species of sea cucumber. 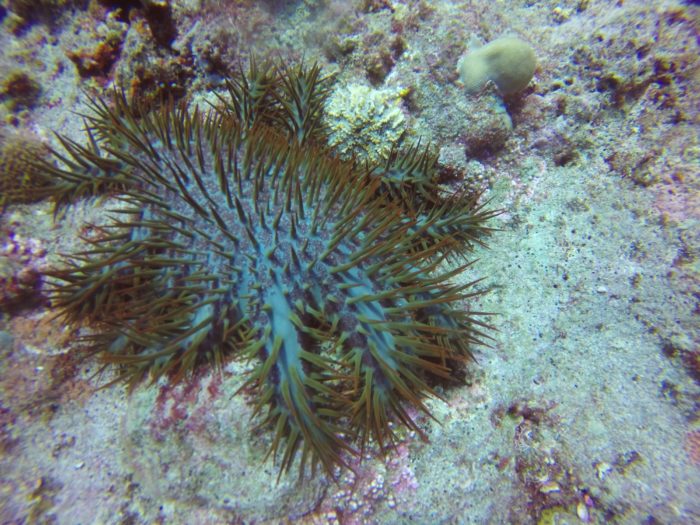 There was the relatively diminutive Sticopus chloronotus, with smooth dark green skin crowned by rows of warts along its length. A Graeffe’s sea cucumber with black mouth tentacles was camped out on a confetti-colored brain coral the size of a boulder.  We saw a couple of massive salt-and-pepper Holothuria nobilis, which are commonly known by the far less dignified name of Black Teatfish. By far the most spectacular of the cukes was the pineapple sea cucumber which ranges from an amber-brown to a creamy white.  It looks like a sea cucumber’s interpretation of a wookie with a shaggy-fur effect caused by the branched papillae that cover its skin.

Alas, our deep entry cost us a bit in dive duration and we were forced to surface.   We sent up our signal buoy and made several off-color jokes about safety sausages as we waited for the the Sea Fantasy to come pick us up.  Our divemaster Kind helped us aboard, and after doffing our gear we headed up to the top deck to observe the recovery of our fellow divers from all along the coast of the island.

It was a very short voyage to West Cocos for our second dive.  Dropping in about  60 feet of water, we faced a current so gentle that it would be a stretch to call it a drift dive.  Unlike the steep drop-off of Cocos East, the western face of the reef was a wide plane of softly rolling hills.  Off to the far west there was a steep drop to 130 feet where sharks were rumored to occasionally cruise, but Elaine and I elected to explore the slopes and crevasses instead.  The relative shallowness of the lagoon basin allowed us to spend nearly an hour reconnoitering.

Here, as on the east side, the water was unbelievably clear.  It was the deep, impossible blue of a studio special-effects screen, making it seem at times like the crisp, perfect corals were props on a film set.  A single, tall mushroom leather coral presided over a gentle slope dimpled all over by smaller depressions. Each seemed to hide some new and fascinating little tableau. 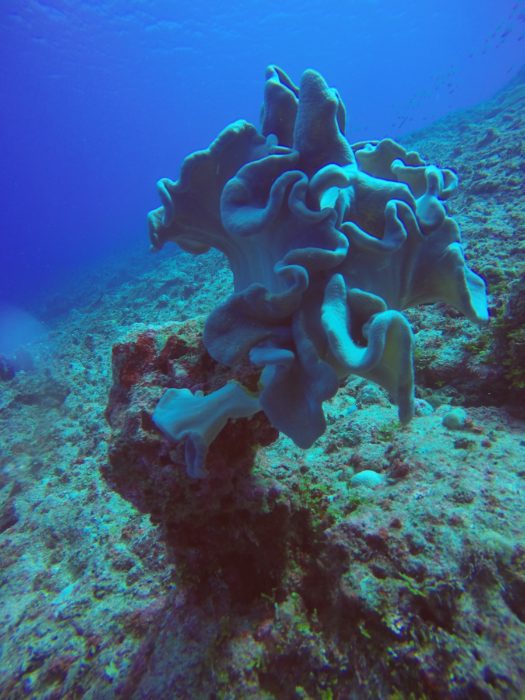 In several we found flat fungia corals, like bony mouths puckered in disapproval.  Branching and bubbling porites dotted the hillside, the bubbling variety hosting miniature copses of flamboyant Christmas tree worms. It was a challenge to get a good look at their feathery spirals without getting so close that they disappeared in alarm.  Along the base of a giant honeycomb coral a green and purple magnificent sea anemone spread wide, the slight motion of the current coyly hiding and then exposing its bright pink oral disc.  Darting within the stinging folds, little anemone fish feinted and retreated–a small black variety nestled underneath the outer lobes while an individual of a larger, lighter species ruled the center section. 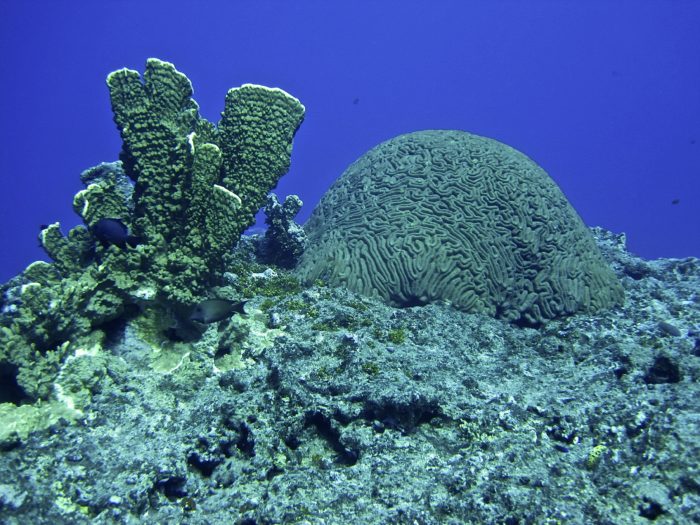 Another hollow revealed a curious hermit crab in a shell that seemed far too big for the eight-legged squatter.  A trio of iridescent sea grapes sheltered not far away, glistening like mysterious jewels.  The ubiquitous brain corals were here too, as were a few spiny COTS and overblown cushion stars.  We spied the rippling blue ribbon of the giant fluted clam’s mantle, peppered with myriad tiny eye-like structures called ocelli.  Elaine turned out to be a master nudi-spotter, tinkling her dive signal to draw my attention to the tiny Phyllidiella pustulosa making their slow way across the seascape.  The dorids were black with clusters of greenish-white tubercles and antennae-like black rhinophores.

Exhausted and elated, we hauled ourselves back aboard the boat.  While we cleaned up and dried off, Captain Bob brought us about and headed back for the harbor.  We spent this surface interval bolting a hasty lunch and collecting Elaine’s husband Rob to join us for the Sea Fantasy’s afternoon excursion.  A short hour later found us back aboard, eager to begin our next voyage along Guam’s leeward shore.  Considering the surreal spectacles of the morning, I was skeptical that any sight could top a double rainbow and a flying fish, or a magnificent sea anemone sharing real estate with a dramatic crown-of-thorns starfish.  But submarine wonders never cease, and as it turned out, I would be just as enchanted by my afternoon adventure as I’d been throughout the morning. 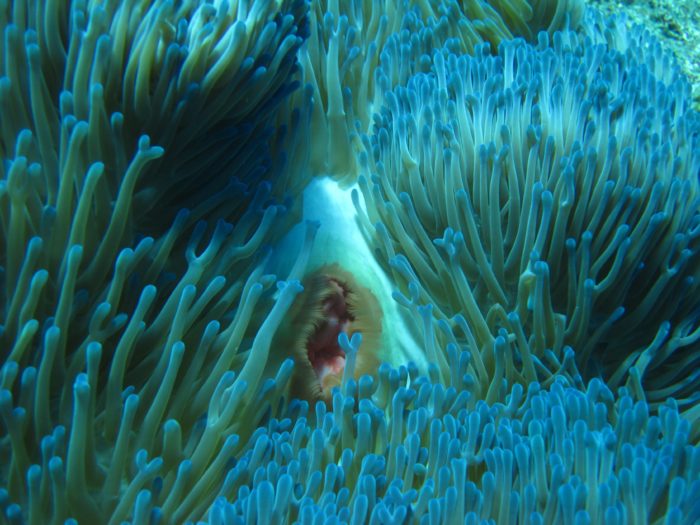 Read about our subsequent dives in Guam Fantasy Part II:  Alutom Drift and the Lunacy of Coral Garden.

What You Need To Know

How to Get There
Guam is a loooong way off–over six thousand miles from my home in Southern California.  I took it in stages with a flight from LAX to Beijing, Beijing to Manila, and finally a quick hop from Manila to Guam.  There are more direct flights available, especially since Guam is often a refueling stop on the way from the United States mainland.  Multiple layovers do have some perks, however, like the opportunity to climb the Great Wall of China which is what I did in Beijing on my way back home.  Airfare is steep–expect to pay upwards of 1200USD.

When to Go
I visited in January during the beginning of the dry season which lasts until June.  It was still wet, with frequent light showers chased by radiant sunshine in a matter of minutes.  From what I could gather from year-round residents, though, there’s never a bad time to be in Guam.

Currency
Guam is a U.S. territory, so they use U.S. dollars.  Be prepared to spend more of them than usual on common items and food though, as everything has to be shipped across the wide Pacific before reaching this remote island paradise.

Where to Eat
There’s plenty of variety for eating experiences in Guam.  Enjoy the uniquely Guamanian experience of ordering a Happy Meal from the shipping container McDonald’s in Dededo.  Or for a fancy night out, get Brazilian barbecue at Churrasco in downtown Tumon, where men will bring swords full of meat to your table and cut you off a slice.  Don’t miss the Chamorro Village Night market on Wednesday in Agana.  There’s a huge variety of food to try, but make sure to get a taste of the spicy Chamorro finadene sauce.

Where to Dive
I dove with Micronesian Divers Association (http://www.mdaguam.com). They have two locations, one in Piti right across from the Fisheye Observatory, and another inside the NEX on the Navy Base.  Check out their 5 Star Dive Club which gets you all sorts of diving and other local benefits, including discounts on rentals and fills and three two-tank boat dives.  With over fifty sites to choose from, you’re sure to find a dive to thrill!

Erin Durbin-Shererhttps://www.deeperblue.com
Erin began diving in 2012 as preparation for a trip to Hawaii and before the year was out she'd left her old life behind to work in the dive industry full-time. When she's not out exploring the deep and collecting c-cards, you might find her making art or working on her master's thesis in cultural anthropology at San Diego State University. Erin is an Associate Editor with DeeperBlue.com.

Scuba Schools International has released a free online course about the history of diving to celebrate its 50th birthday.
Read more
Scuba Diving