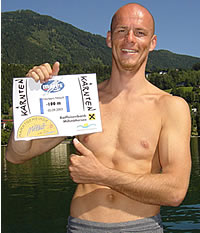 Pending verification, on September 4th, Herbert established a pending world record of 95 meters in the Constant Ballast discipline. The following day, Herbert became the first human being to surpass the 100m barrier in unassisted freediving.

Without the help of weights or lift bags he reached a depth of 100m without even using fins.

The dive was executed under the surveillance of two AIDA International judges. It took the 33-year-old Austrian 4mins and 07secs to set this new world record.

Deeperblue wishes to extends its congratulations to Herbert for accomplishing this remarkable feat.

Cliff Etzel
Cliff is the former Freediving editor of DeeperBlue.com. He is now a freelance journalist and film-maker.