Herbert Nitsch Talks About His Fateful Dive and Recovery 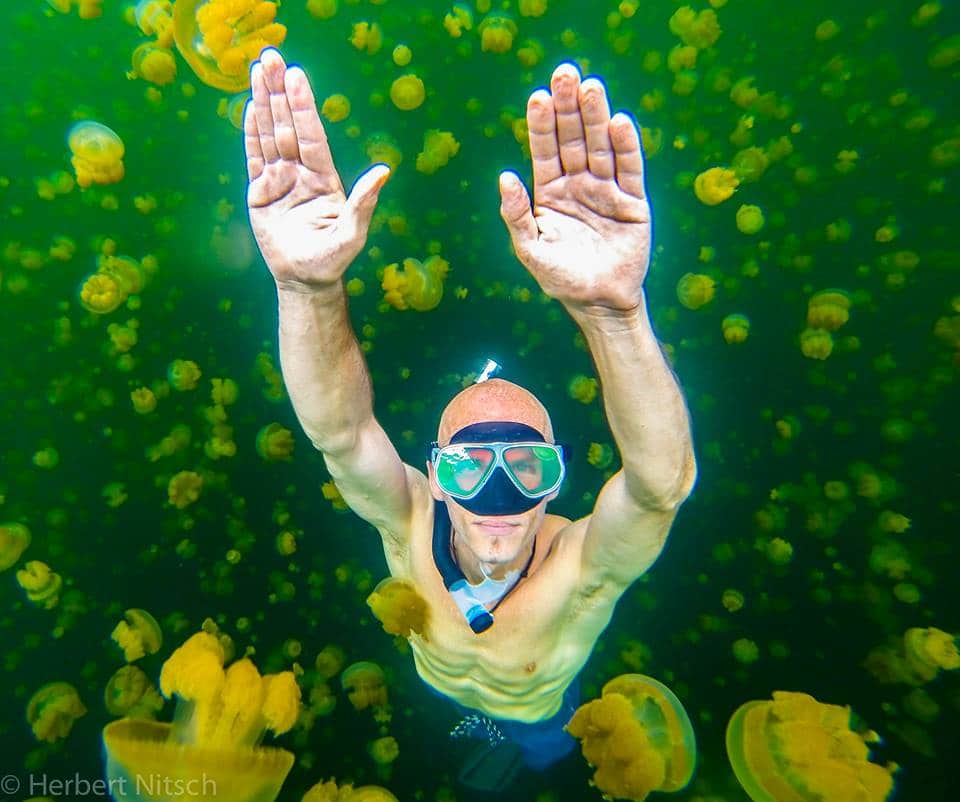 Herbert Nitsch, who nearly lost his life during a world record attempt on 6th June 2012, has spoken publicly on social media sites about the fateful day in June last year and his recovery since.

His full statement is below.

First and foremost I would like to thank all those who believed in me and supported me since the record. It played a big role in my well being and I can’t thank you enough for the concern, the care you gave to me. As freedivers know better than anyone, when you’ve been quite far down, getting back up is the only way to go – and all of you helped.

On that windy Wednesday in Santorino, Greece, the aim was to reach 800 feet (243.84 meters) with the no-limit freediving discipline, of which I already held the 700 feet world record. Several years of preparation, sled-design, safety measures and thorough training led up to this rather high profile event.

I did reach the record depth of 818.6 feet (249.5 meters), however, on the way back to the surface I lost consciousness due to narcosis (a first in free diving). The sled and safety devices were designed in such a way, that it would stop at 10 meters depth, which it did, within reach of the safety divers. Thanks to the well organized emergency rescue plan as part of my extensive pre-dive safety preparations, all went as scheduled after I reached the surface.

The original plan was that I would slow down the sled between 100 and 70 meters below the surface on the way back up, and have a one minute decompression stop at approximately 10 meters depth. Because of the blackout due to narcosis (at approximately 100 meters below the surface), I was not able to slow down the sled, and thus it continued on to 10 meters where it stopped as programmed. Fortunately the safety divers brought me right away to the surface.

Because this omitted the planned 1 minute decompression stop, the result was serious DCS (decompression sickness), which is equivalent in my case to several brain strokes with severe initial consequences.

Prior to reaching the surface, I did regain consciousness and had the clarity of mind to ask for oxygen, to descend back to about 10 meters for about 20 minutes thus avoiding some impact of DCS. Underwater I realized that things were wrong in my head. And once back to the surface I had to be brought with urgency by speedboat to the port of Fira, onward by ambulance plane to the hospital and decompression chamber in Athens.

After a good week’s stay in Athens, I was flown by ambulance plane to Murnau in Southern Germany to undergo recompression therapy for about a month. This was followed by additional months of rehabilitation in Vienna to learn to walk, talk and move around again.

It was not an easy road. During the course of rehabilitation I went into depression, wondering if I would ever get back to normal life again, to the point of contemplating jumping out of the window to end the mental chaos and physical limitations I endured. Fortunately I realized that the second floor of the rehab center would not do the trick, so I gave up rather quickly on that idea.

Despite the slow progress and initial depression, I kept my motivation alive and made the decision to do anything to bring my life back to what it used to be. I started a strict regime of super foods, healthy living, exercise and listening to my own intuition (even if this often meant disregarding well-meaning advice from doctors and experts). I adopted the same attitude that I always used with freediving: pushing boundaries, further exploring the human potential and setting new limits where we thought we already knew everything.

I am doing well now. There are still some physical challenges to deal with related to coordination and speech, which are typical consequences of neurological damage. But from what I hear, those who have no idea of my condition do not really notice these limitations, which is a rather positive sign.

In January and February of 2013, I went with my father for a month trip in the South Pacific, where I lectured onboard a luxurious cruise liner, and started free diving again. It felt great to be back in the water.

In May I went back to Palau for freediving, and it made me realize once more that there is so much yet to explore in the deep blue.

It was a deliberate choice to keep quiet from the media for all this time since June 6 of last year until now. After the record dive last year, the attention we received was overwhelming. Because I was not in a position to make my own statements during most of that time and was not sure about my recovery and progress, I decided that healing had priority over media for the time being. Also because media often misinterprets events or interviews, I decided to wait so I could tell my own story in my own words when the time is right.

Looking back, I am utterly convinced that my dive plan was realistic and feasible. But what was not, was the way we conducted the dive under the forced conditions of that particular day. I should have postponed the dive, prepare better and let the weather settle, before deciding to go for it. Things could then have been different. But life does not work backwards and even though I was obviously the one to pay the highest price for it, all those around me, family, friends, team, followers and supporters were also affected to some extent. The support I received from everyone greatly contributed to my motivation and made my recovery easier.

A very thorough documentary by Red Bull will be aired June 6, 2013 (exactly one year after the record) around the whole event, including various phases of the recovery process and never seen before pictures. The film team was also with me in the South Pacific for a while this January on the cruise, which is also featured in the documentary.

Lectures and writing will be the main focus for me in the coming months, along with more travels and new ideas linked to the underwater world. I plan to work more towards the protection of the oceans, but also have in mind to design a new kind of submersible and new ways to explore the oceans. Competitive freediving is not likely to be part of the future, but for the rest, I am still the same I used to be; the will to create new ways to achieve new things never left me.

I truly look forward to sharing more good news with you in the future.“