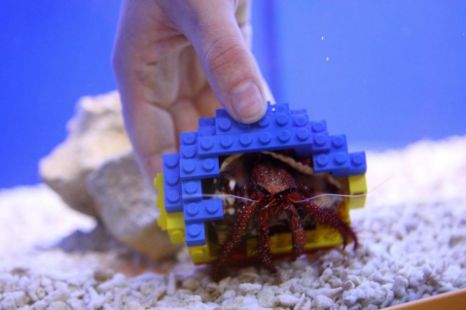 An unusual home has been created for a hermit crab which resides in the Atlantis Discovery Area at Legoland in Windsor, Berkshire. Harry the hermit crab, as he is known, has had a bespoke house made for him entirely from Lego.

According to the Guardian on Facebook, Legoland land’s Liane Riley said “he rejected the sea and snail shells on offer and seems very comfortable in his new home”.

As the hermit crab grows in size, it has to find a larger shell and abandon the previous one. This habit of living in a second hand shell gives rise to the popular name “hermit crab”, by analogy to a hermit who lives alone.  Several hermit crab species, both terrestrial and marine, use “vacancy chains” to find new shells: when a new, bigger shell becomes available, hermit crabs gather around it and form a kind of queue from largest to smallest.   It seems like Legoland may have real estate opportunities for hermit crabs in the future.