Mother Nature Whips up a Storm at #VB2014 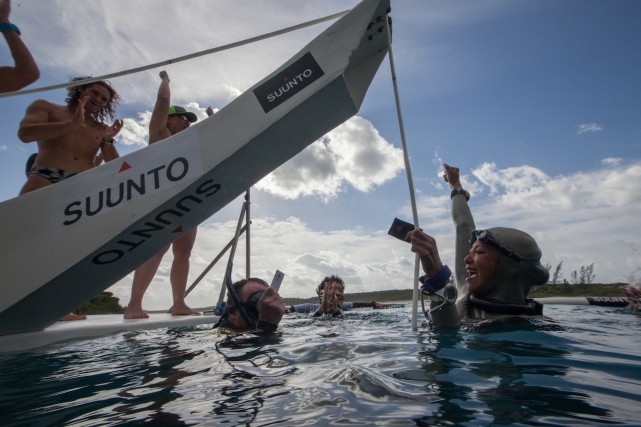 Today Mother Nature decided to unfurl a squall or two, or three! on the freedivers at Deans Blue Hole. However, howling winds, intermittent torrential downpours of rain and the uncertainty of whether it would get better or worse did not deter the heartiest of competitors who managed to deliver clean performances despite the deteriorating conditions.

Samo Jeranko of Slovenia persevered to achieve a new national record in constant no-fin with a dive to 76m in just under three minutes. “The wind and the rain started to get worse on my breathe-up; I was cold but I was fighting it,” said Jeranko  “but I made it, of course!” This is the second national record for the tall mechanical engineer, who still has his sights on a 105m white card dive.

Lena Jovanovic of Serbia returned from a depth of –75m CWT to nab a national record for Serbia in a speedy two minutes and :25 seconds. “I finally got over the technicalities and broke that national record. It was a beautiful FAST(!!!) dive, I really enjoyed it!!” exclaimed the blonde athlete.

Kate Middleton of New Zealand (by way of British Columbia) suppressed the cold and shivering she was feeling to come up strong from a free immersion dive to 68m where she executed an extremely clean surface protocol to receive a white card and a new national record. The yoga instructor now has two new national records to boast and if she puts something on the board for no-fins she has real potential to medal at the comp.

Sayuri “the sleeper” Kinoshita is also a real contender to place in the top, especially now that she has secured her second new national record for Japan after successfully completing a free immersion dive to 68 meters in two minutes and :45 second.

Alejandro Lemus of Mexico continued his consecutive run of white cards and became the very first Mexican diver to reach 100 meters under constant weight with a dive time of three minutes and :35 seconds.

Also worth mentioning are Tomoka Fukuda of Japan who delivered the deepest dive of the day for the women at 86m CWT in just under three minutes, no small feat given the conditions and the fact that just before her dive Alexey Molchanov had a minor black out. Rounding out the strong performances from the Japanese was Kosuke Okamoto, (Misuzu’s husband), who literally weathered the absolute worst conditions of the day but was unfazed and came up clean from a no-fins personal best dive of 43m.

The forecast does not look promising for tomorrow’s big schedule, with William Trubridge’s world record attempt on tap for Steinlager and a live stream to New Zealand viewers, but fingers are crossed and whatever happens the agile safety team for Vertical Blue and the event crew are prepared. Stay tuned. 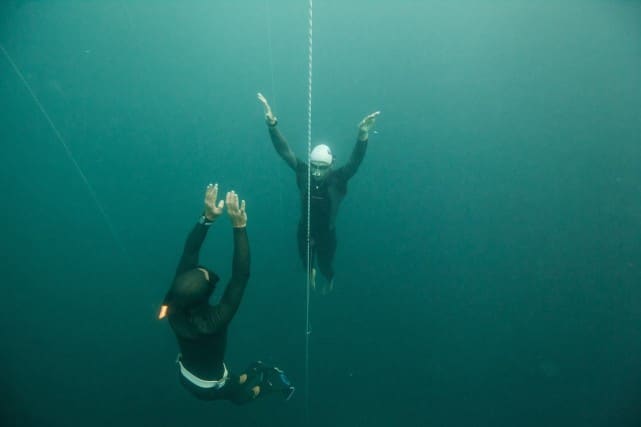