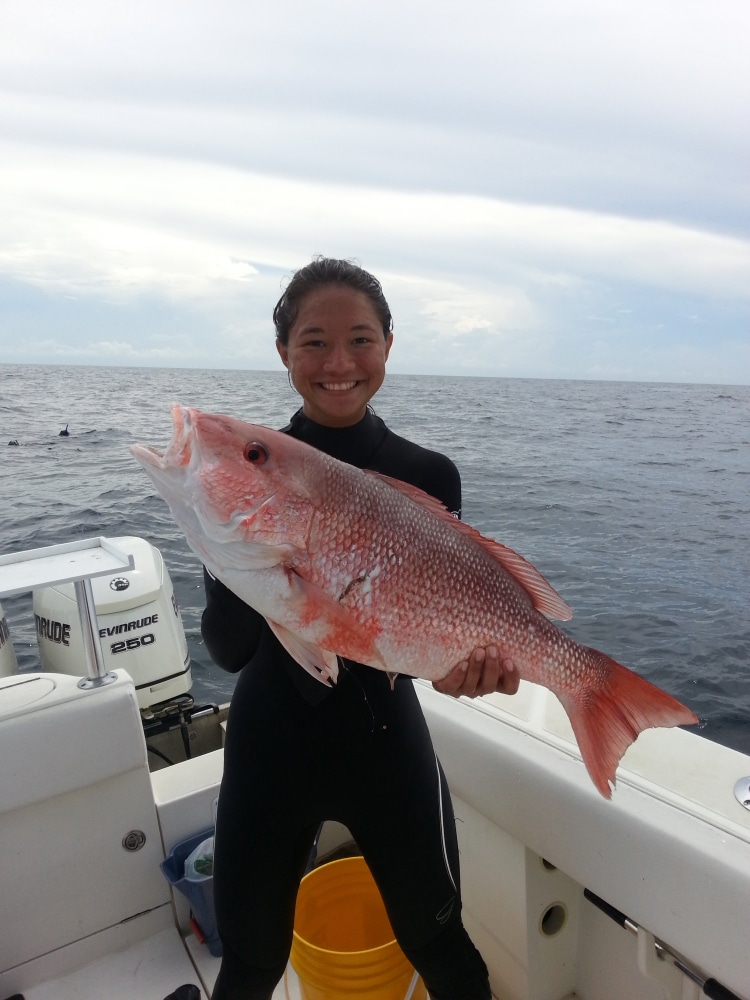 On August 23, Alli Penovich went out for a spearfishing trip on her father’s 41-foot Tempest. The affectionate group of spearos anchored about 15 miles north of Port Canaveral. Alli, Joe and Zack hit the water first leaving the other two behind in the Tempest for safety. Alli breathed up and swam straight to the bottom in 58 feet of water to wait for a world record to swim by.

At 3:15 p.m., armed with her Daryl Wong speargun rigged with a reel, Alli waited patiently until a school of red snapper presented itself.  She picked out the biggest one and took her shot. It proved to be big enough for a new world record at 11.45 lbs with a girth of 20 inches, forklength of 25 inches and overall length of 27 inches.

The action didn’t stop that day with spearing the record red snapper. Alli had to land the fish with a hungry 7-foot-long bull shark nearby. The shark darted toward Alli and her catch, threatening her new prize, but decided not to hit Alli’s snapper and was deterred from a return visit by Alli’s primary safety, her father Joe.

Swimming back to the surface close together for safety the father-daughter team emerged and took time for their requisite recovery breaths, diminishing their chances of a blackout.  Joe stood by, watching for sharks and proudly taking video of Alli as she finished bringing the fish in, her first world record victory.

Joe reports of that day:

“World Records are nice but they pale in comparison to watching my daughter becoming so comfortable in the water, in all situations, whether going deep or dealing with sharks. To share this love for freediving and spearfishing is a rare thing to have between a father and daughter. I am so blessed, but trumping all of this by far is the good decisions Alli is making out of the water in how she lives her life. I could not be prouder as a father!”

Not only is Alli a young, record-setting, history-making spearo with undoubtedly latent talents yet to be tapped into, she is also unassuming, smart, a track and field athlete at Cocoa Beach High School, and has a very deep religious faith. It is clear who gets the credit for Alli’s success when she says,

“I feel blessed to have had my dad, brother and grandpa there to witness my catch and I thank God for keeping me safe and giving me the opportunity to get a world record snapper.”

Additionally, Alli is a true competitive freediver as well by having dove to a depth of 132 feet (40 meters) during her first ever Performance Freediving International (PFI) freediving course taught by Evolve Freediving at Dean’s Blue Hole this past January.  She continued to explore the depths by training and accomplishing a depth of 164 feet (50 meters) in just four more days.

“It is obvious that Alli will claim success no matter what field of freediving or spearfishing she chooses to pursue,” Evolve Freediving President Ashley Futral Chapman said.

Alli plans on applying for college this year to San Diego State University. If accepted, the spearfishing world will open up for her on the West Coast with the elusive white sea bass, Atractoscio nobles.

“An exciting prospect,” according to Futral Chapman.