No matter how much you feed them

No matter how much you try to feed them they still want more. It starts out small. First a weight belt, then a mask and snorkel. You feed them hoping that they will leave you alone. Let you dive in peace. All week there have been sacrifices from the PFI team, safety divers and support staff that have staved off the gods of the ocean. Today they became hungry again.

It was yesterdays bizarre happenings that seemed to foreshadow today’s short fall. The declaration that Tuesday was a day off was met with much relief by all involved. The declaration was short lived. Just past 9 am a skeleton crew, the athletes and full line up of safety divers hit the water for a training session. Within 30 minutes the 100 meter safety line had them anchored to the Cayman wall. It was another thirty minutes before the safety divers had them untangled. To make things worse the 250 lb lift bag that was hauling up the sled exploded at the surface. The day ended early without a single dive.

Fast forward to 11:00 am Wednesday morning. The lines were dropped over the side of the athletes boat with all eyes peering towards the bottom. We decided to free drift which alleviates the tail wagging caused by tying off to Tenata. Docs sled line was set to 61 meters which is two meters deeper than his previous record set just two days ago. There was some kind of restlessness in the air today. As Doc was breathing up somebody on Tenata realized they left their fins on shore. The captain ferried the big boat back to the dock to pick up the passengers fins. We made it back just in time to suit up and join the rest of the support team in the water. It seemed rushed. 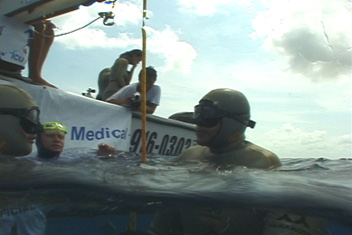 Doc was ready to go within minutes of our arrival. He mounted the sled, gulped his air and in a moment he we was gone. In what seemed like seconds he reappeared from 47 meters pulling and swimming his way back to the surface. It was not his day. At the surface Kirk had a brief discussion with Doc about what happened. He said that he added some additional packs to his breath up and by the time he reached depth it just didn’t feel right. I think he too felt rushed. They ocean was growing hungry and Mandy-Rae was next. 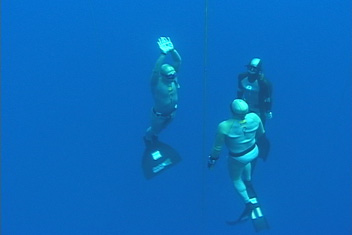 They safety divers attached the lift bags and blew the sled back from the bottom just moments after Doc left the water.  There was a slight delay in resetting the line for Mandy at 115 meters so she left the water and waited on the stern of Danny’s boat. That’s not an ideal situation for a freediver that has already brought on the dive reflex. She mounted the sled but seemed acutely aware of what was going on around her. That’s not normal for Mandy. She is usually “in the zone”. They pulled the snap shackle and she disappeared. 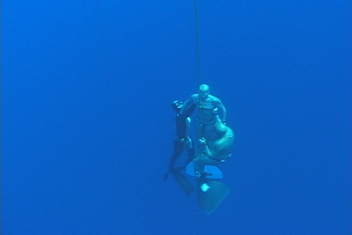 At the 1:45 mark Kirk made his dive to meet Mandy at 30 meters. Safety freediver Tom Lightfoot followed close behind. When I leveled off at 20 meters with my camera the trio came into focus in my viewfinder. Mandy gave Kirk the signal that she needed an assist and the three of them came rocketing past me to the surface. They moved so fast that I couldn’t keep up with them. Once above water Mandy went out for a few seconds but quickly recovered. Then she began coughing. It was a good squeeze to the chest that kept her on the stern of the boat breathing O2 for a few minutes. She recovered fine but, the gods weren’t done with us yet.

The safety divers that have been working with PFI have been nothing short of phenomenal. The turn around time for the sled has been like clock work. And, in keeping with that tradition, they blew the lift bag right after Mandy dive finished. Kirk was still assisting Mandy on the stern of the boat when that big 250 lift bag came shooting at us. Tom Lightfoot made a dive for it but it managed to get past him. It came right at me and I had to swim out of the way to avoid getting hit. Then we heard the explosion. Boom! Dam those things are loud! Like fish responding to dynamite we were all stunned. Looking down I saw the sled sinking into the abyss. Luckily two of the safety divers were able to stop it at 20 meters and blow it back to us. At that point they were out of large lift bags that they use for sled and diver retrieval. Kirk wisely called Martins 136 meter Variable Ballast record attempt off.

In the evening Kirk held a meeting to analyze what happened. It was less a meeting about failure and more about what can be done to improve the last day of attempts. By nightfall the wind had laid down and the sea finally seemed to fall asleep. Everybody here has done their part to make the best of tomorrow. As for me, I think I will take a walk to the end of the dock tonight and drop a weight into the ocean.