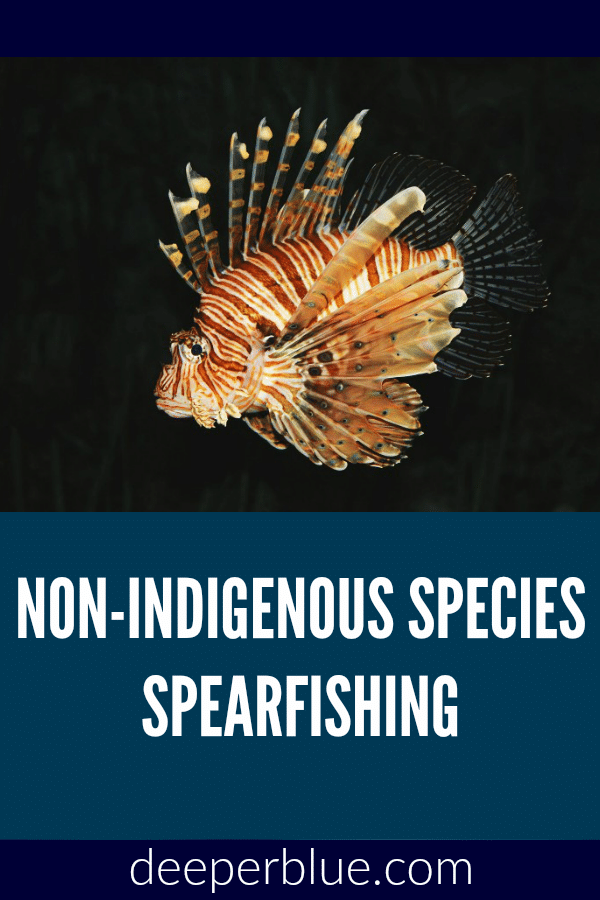 The Marine Biological Laboratory at Woods Hole, Massachusetts defines the term “non-indigenous species,” (NIS), as a species living outside its native distributional range, having arrived there by human activity, either deliberate or accidental. Non-indigenous species are also called invasive, non-native, alien, exotic or introduced species.

Not all non-indigenous species are bad for the host environment, for example, citrus trees are not indigenous to Florida, where they flourished and became a major economic boom. In the last 15 years, the Washington Post, National Geographic, Time Magazine, and many more, have published “Top Ten or Dirty Dozen Lists”, showing that 4 NIS fish made the cut of the World’s most destructive invaders.

Target selectivity being the very nature of spearfishing makes spearos the perfect predators to unleash against the Ferocious 4, and fortunately, these fish are palatable to downright delicious! Invasivores is a relatively new name for those who deliberately seek out invasive species for their diets. What could be a better way to glamorize these food fish to people, than photos of proud spearfishermen & women with their cool pray?

Nile Perch, native to many freshwater African lakes and rivers, can grow to 2m / 6.5ft and weigh 200kg / 440 lbs. In the 1950’s they were brought to Lake Victoria in East Africa. Commercial fishing controlled them until the late 1980’s. These monsters are believed to have caused the extinction of three hundred native species of fish, crustaceans, shrimp, and zooplankton. In 1995 the fish was found to be high in Omega-3 acids, so for 20 years, it boomed in European markets. The majority are caught on longlines and gill nets, and by 2004 overfishing brought them to the verge of extinction. Yet if the fishery is controlled Nile perch may come back. “Darwin’s Nightmare” is an academy award nominated documentary which describes the devastation in Africa, because of Nile Perch.

The Nile perch resemble a cross between a snook on steroids and a Warsaw grouper. People compare them to grouper and sea bass, because of the mild taste and medium texture. Table fare is not the reason few spearos targets these fish. I found photos of perch harpooned by natives, but only one story of spearfishermen, and with small catches up to 5kg / 11lbs. Reasons could be low visibility and rough infrastructure, but the deal breaker is probably Nile Crocodiles up to 5m / 16.5ft! (The spearos mentioned saw crocs, but reported no problem.)

The Northern Snakehead was called “Fishzilla” by National Geographic Magazine, “Frankenfish” by some, and ugly by all! Snakehead fits the front-half description, with wicked sharp teeth, but the back-half looks like a squirmy eel. The largest caught in Florida was 1.2m / 4ft, and 17lbs / 7.7kg. Snakeheads originate from China, Korea, India, and Africa, and are considered a delicacy. They were released in Hawaii as early as 1900, and the continental US by the late 1900’s in CA, FL, and the Chesapeake Bay. Snakeheads eat everything and can survive on land for up to 4 days, allowing migration to other lakes and streams. If caught it is recommended to kill them immediately, and don’t keep any alive on land.

Early reports said the snakehead market failed, but a surge in public appeal has become more widespread with commercial marketers paying up to $4.00 a pound. A recent Baltimore event served Northern Snakehead to a 100 people who gobbled down the white-fleshed fish with a mild flavor

Hook & line fishermen say it’s a tough fish to catch as they dive down hard and rock up, then frequently cut off lines. Spearfishers are spearing snakeheads successfully, but do have to be careful of the sharp teeth and aggressive nature, as people have been bitten.

There are many types of carp, but most are called Asian and sometimes Eurasian Carp, originating from China, India, Eastern Russia, and Europe, and brought to many parts of the world, including North America and Australia, where they are causing destruction to native marine life.

The New York Times reports that Australia is turning to a herpes virus, discovered in Israel, hoping it will kill carp by destroying skin, kidneys, and gills. Aussies succeeded in killing millions of feral rabbits with biology control, but regret introducing Hawaiian cane toads to eat insects destroying sugar cane crops. The toads are now eating everything and poisoning predators that eat them.

Common carp were brought to the US as a food source in the 1800’s, and are in every state except Alaska. They are not considered invasive, like the 4 other carp species, which arrived in America in the 60’s through the 80’s. Grass carp are in all states, and sterile fish are widely stocked in lakes to control aquatic weeds, so they are a low threat to native fish. Black carp have only been found in 4 states of the lower Mississippi basin, and pose a medium threat, as their diet is snails and mussels, important to the aquatic ecosystem. They are the largest carp reaching 5ft / 1.5m long and can weigh 68kg / 150 lbs. Bighead carp are in 26 states and Silver carp are in 16, and both are high threats to native fish, because of huge appetites for plankton which deplete other fishes food sources. Carp stir up bottom sediments while feeding, and muck up clear waters, changing the type of species that can survive there. Silver carp are usually half the size of the big 4, which all reach 1.2m / 4ft length and a heft of 45kg / 100lbs.

Carp is good tasting, much like cod, or a cross between scallops and crab, and they have low mercury levels because they are not fish eaters. History shows carp to be an important food source outside North America. In the US they are sometimes called Silverfin or Kentucky Tuna, to create more appeal.

Videos are running rampant of competitors in the Redneck Fishing Tournament of Bath Illinois, catching carp in nets while being towed by boats! Not to be outdone, Peoria Carp Hunters wear football helmets, crude pads and carry trash-can-lid-shields, while spearing silver carp with swords and pitchforks!

So spearos should fit right in competing for YouTube hits! Asian Carp are the only fish of the Ferocious 4 that have any IUSA World Records, 9 of them so far, which started with a 30.5 lbs / 14kg Common Carp in 2009, and topping out with a Grass Carp weighing 49.7lbs / 23kg. Fish twice that size are very common, so World Records are wide open. Probably Nile Perch and Northern Snakehead have never been turned in for records.

I shot my first lionfish while scuba diving in the Dry Tortugas in 2010, following reading the newly published “The Lionfish Cookbook, The Caribbean’s New Delicacy.” My thanks go to this must-read book for keeping me un-stung! After stoning the first one, while his 7 buddies watched, each one took their turn, as “next to fall.” All but one were trimmed of their 13 dorsal, 2 pelvic and 3 anal venomous spines. I ascended with the last one intact on my Lion Tamer sling, which slid down and almost got me. I wanted an in-detail lionfish inspection on the boat. Single flopper tips are not good at stopping spinning or sliding to prick your hand, right through your glove.

Lionfish are the first successful marine fish invasion in the Western Atlantic, by a near perfect invader. They are ravenous ambush predators, smart but ignorant of being prey, have venomous protection, great camouflage, rapid growth, and breed like rabbits. Lionfish can wipe out 90% of all life on a single reef. They have been called the “Norway Rats of the Atlantic!”

In 1985 they were first seen offshore, of southeast Florida, where dozens of exotic tropical fish are released, then perish. (In Miami, I videotaped a blue face angel on a reef, in the middle 80’s.)

The Lionfish is native to Indo-Pacific and the Red Sea, and as of the 2014 USGS map, the Lionfish infestation has spread throughout the Caribbean, Gulf of Mexico, and up the Atlantic coast to Massachusetts.

The organization www.reef.org started the first ever lionfish derby in 2009, in Green Turtle Cay, Abaco, Bahamas. Because lionfish have no marine predators, divers are one of the few effective means of reducing the lionfish population. The total number of lionfish removed in REEF derbies in 9 years through 2017, is 21,092. The largest lionfish was speared in Florida and were 48.8cm / 19.213in. Lionfish are not in the IUSA World Records, but might soon.

Lionfish are most commonly compared to hogfish with very white meat and a light flavor. It is also high in lean protein and important Omega 3 fats. The Reef Lionfish Cookbook says it’s moist buttery meat that is sure to make your mouth water. The book is full of fantastic recipes!

Moderately short polespears with paralyzer tips work very well for all divers to shoot and pin one or more lionfish, and then easily slip them off into a container. For freedivers, that’s a cooler on a boat or float, but scuba divers can carry a tube container, with a one-way entry gate, and a screw-off removal door. If divers just want a dinner catch, they can cut off the spines with sea snips and then string them like any other fish. Handling lionfish is a big danger because they can spin and the spines sting, if not pinned or held properly. Because the pectoral fins have no spines you can carefully grab and hold a lionfish by the nose, and then trim the spines. It’s best to keep lionfish in a separate cooler as well. After catching about a hundred lionfish, I’ve still not been stung, but they say it’s like a wasp sting, but victims have various reactions, so it could be worse. Heat is the best pain relief, with hot, but not scalding water, or heat packs.

With popular fish regulations being limited more every day, it’s good to have these non-indigenous fish as alternatives, and they are being encouraged!