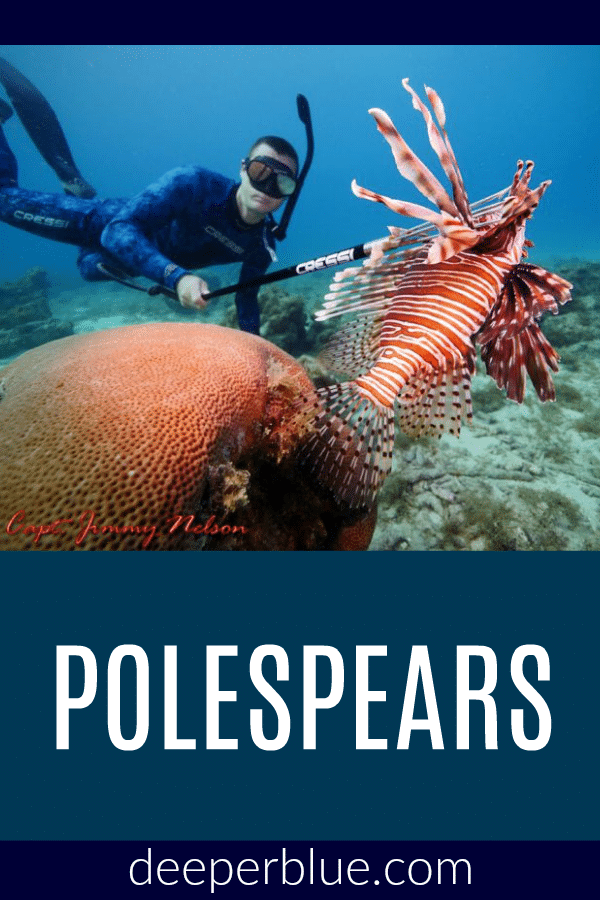 Polespears, the oldest and simplest devices for spearfishing, are commonly and incorrectly called Hawaiian slings. An early polespear for a diver was a single piece spear with a sharp tip on the front and a rubber band attached to the back, first made of wood or bamboo, and later commercial models were produced of fiberglass or aluminum. Our next chapter will be about Hawaiian slings which are a slingshot-like device which shoots a separate steel pointed shaft.

Unquestionably polespears are the easiest piece of spearfishing gear to master, because they are all one piece, and only shoot as far as the spear is long. Safety is easier to maintain with limited range gear and entanglement is very unlikely to occur with polespears. Also, simple polespears keep shooters from targeting bigger more dangerous fish. Spearfishing with polespears will teach a diver to learn more about their prey and force them to stalk fish, rather than relying on range and power of spearguns. For these reasons, many parents choose to teach their kids to spear with polespears before spearguns, or even slings.

Early polespear models often had a single pointed tip and no barb, so a fish had to be killed by the shot (today called “stoned”) or pinned down so the diver could grab it before it shook free. Another advantage of polespears is the unique ability to shoot again in a mere second or two, so a wounded fish could be shot – lost – then shot again, then lost again – then shot again, and so on.

How do you shoot a polespear?

Remember that loading even a polespear on land can be very dangerous. You can practice the mechanics of loading a pole if you only move your hand up the pole a few inches to feel the effect. First point the pole away from everything, then loop the band over your preferred hand, (the entire 4 fingered hand, not your just your thumb), and grab the pole, just barely snugging the band so it stays in place. Next, with your other hand push the pole down a few inches through your preferred/banded hand, then squeeze and hold the pole only with your banded or shooting hand. With the pole still pointed horizontally at nothing, extend your arm fully and lock your elbow. As you slowly release your grip on the pole, it will move forward farther than the few inches you pushed it back because of its momentum, then finish by gripping the polespear again. A polespear loaded more than a few inches will also kick your arm back, which is why you lock your elbow for extended shots. Loading a polespear will also bow the polespear because most polespears are relatively flexible, and this will create a whipping effect, which causes inaccuracy, even with stiff polespears. To stop bowing you need only twist the polespear a full turn while loading the band back. Again, do not load the polespear out of the water, as it’s made to be fired in the water, which greatly reduces the speed and kick of the pole. Shooting land targets also often break or bend tips or the polespear itself.

The biggest disadvantage of polespears is their relatively short range, with the longest being about 10 ft / 3 m which are the best for big and fast fish in clear water. Polespears go down to as short as 2.5 ft / 76cm and are great for shooting lionfish because these venomous stinging fish can’t slide down the pole like they can on most spear shafts, which often ends in a painful injury. One popular tip for polespears is called a paralyzer because the 3 long tines on the tip spread as they penetrate and often hit a kill area, and they stop the prey from spinning, which prevents tear-offs and reduces lionfish stings. In countries like the Bahamas, which allow shooting spiny lobsters, the paralyzer is also a favorite. However, paralyzer tips are not as effective for larger fish because the thin tines can break much easier than thicker shanks of single or double barb tips.

The polespears I used decades ago in the Bahamas frustrated me. If they were fast and accurate they were usually cheap yellow fiberglass and were weak and broke instead of holding onto a big fish. By contrast, if they were heavy duty and strong they were extremely slow and that often made them inaccurate. I took a 10 ft / 3 m thick aluminum polespear to the remote Cay Sal Banks in the Bahamas back in those days and saw a huge black grouper sitting still and camouflaged on a low reef around a monstrous blue hole. The water was crystal blue and I descended and lined up on his head, with the powerful band pulled almost to the front of the pole, and released the shot. The black wasn’t spooky but slowly moved a couple feet forward while my polespear took nearly forever to get there, and when it did it blew a big hole through his mid-back, known as a window shot! The big grouper bent my monster polespear into a pretzel, but I grabbed him in the gills and dragged him to the surface, and my 10 footer never shot another fish. After that, I went back to Hawaiian slings for my Bahamas trips because even in those days they were much faster, with longer range, and bending a shaft was far less costly than a big polespear.

In the last 5 or 6 years, polespears have seen many innovations and refinements. The first change of note was the move to carbon fiber and more advanced composite fiberglass materials. Adding high quality hardened stainless steel fittings and tips and suddenly you have fast polespears that are much stronger than the old-time models. Many new models also handle very well and are usually 8 ft / 2.5m or more and light on the tip, with balanced weighting farther back, unlike my heavy old dinosaur polespear. Some are 2 to 3-piece breakdown styles for traveling divers and others are 1 piece designs for divers with their own boats.

Perhaps the most important changes are the newly designed tips that enhance the improved polespears. Long single barb shanks made of spring stainless steel started it off, and like spear shafts of the same design, they penetrate well and are usually 5/16” / 8mm for strength. However, big fish still bend them up promptly if the shot is a bit off target. Early detachable tips first arrived on speargun shafts, and were usually heavy and bulky, blowing giant holes in fish, but about 12 to 15 years ago, slip tips came out for speargun shafts that were sleek and penetrated well. After the shot when a fish pulls back against the tip, it detaches turning perpendicular to the penetration angle and pulls away on up to 2 ft. / 60 cm of stainless steel cable or 1000 lbs. spectra line. Polespear manufacturers paid attention and reduced them even more, and adapted the sleek slip tips to fit their poles. So a modern-day polespearo can shoot a big fish with a blazing fast shot and his fish is held tight while the slip tip detaches, thereby saving the pole from obliteration! Multiple IUSA World Records for the polespear & sling category, started in 2013, are proving the polespear designers made the right decisions.

Polespears can also be rigged to attach float lines for bluewater hunting, but this presented a couple new problems. One of my friends found out after attaching his polespear band to a float line that when the fish he shot substantially stretched out the band and then just happened to tear off from the tip, that the polespear shot back at him at a high rate of speed! It missed him by a short distance, fortunately, but even though it was the duller back end of the pole, it certainly would have hurt quite a bit. Attaching the polespear to the back of the spear is a much better way to go about it, but the pole will not pull the float well when fired, so it needs a shooting line approximately the length of the polespear to allow it to shoot unrestricted. Many adventurous polespearos have also started attaching just the slip tip to the float line, while the diver holds on to the polespear, almost like bluewater spearguns. And if a diver can attach the polespear or tip to a floatline, of course, it can also be attached to a belt reel, for shooting less than bluewater sized fish. Belt reels are made to be detachable from a weight belt and weight belts are also detachable from the diver, but this leaves much possible entanglement up to less than certainty, so don’t even think about this until you’ve lived through many spearfishing rodeos!