Last weekend, I joined a couple of freedivers on a midnight trip to Keelung fish market on Taiwan’s East Coast. We were on a mission to find sharks. Dead sharks. I braced myself, unsure of what we would find. How would the vendors react to a foreigner taking photos at 1 AM? I’ve wanted to find out more about shark fin consumption in Taiwan for some time and was curious to see how the market would compare to those in South Korea, where I’d seen whale, dolphin, shark, and mola-mola being sold.

“An estimated 100 million sharks are killed every year with fins from up to 73 million used for shark fin soup, primarily to supply the market in Mainland China. A pair of shark fins can sell for as much as US$700 per kg in Asia. Some shark populations have declined by up to 98% in the last 15 years and nearly one third of pelagic sharks species are considered threatened by the International Union for the Conservation of Nature.”

Now, go back and read that again, slowly, and let it sink in. Sharks have inhabited Earth for 400 million years. Humans only evolved about 200,000 years ago. We need to act now.

How did I end up at a market in Taiwan taking pictures of dead baby hammerhead sharks at 1 AM on a Sunday morning?! Last year, I came across a very cute Facebook page called Congratulafins. This not-for-profit organization was founded by Christina Teng in November 2011. The organization’s original intent was to educate people about shark fin soup consumption, a traditional wedding dish. They soon realized that education had to start at an earlier age, with the young generation, in order to have an effect on future shark populations.

Christina (Chris) is a talented teacher and artist who decided to give sharks a ‘cuddly’ make-over, offering an alternative to the standard Jaws narrative. She works together with a small team of scientific and design consultants to research the species sold at markets. 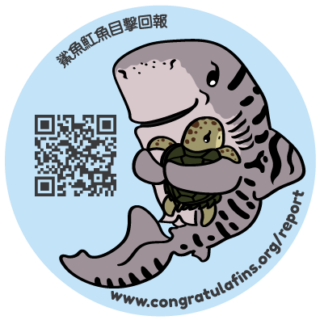 Congratulafins’ message emphasizes the worth of living sharks and encourages eco-dive tourism as an alternative to destructive fishing practices. They encourage divers to report shark sightings whilst promoting education, open communication, and cooperation with fishermen. They also work alongside other environmental organizations to lobby the government to change laws.

Shark fin consumption patterns have changed over recent years. This is due to a shift in consciousness in the younger generation, brought about by celebrities such as Jay Chou, who starred in a WildAid campaign launched almost a year ago. There are many other celebrities who have put their weight behind SPCA Taiwan and WildAid Taiwan campaigns.

Unfortunately, cultural habits are hard to break. Certain traditions are upheld and encouraged by elders, such as the tradition of shark fin soup consumption on important occasions like Chinese New Year and weddings.

Taiwanese are well aware of the effects of mercury on humans, due to Minamata disease that made headlines back in the 1970’s. However, Congratulafins states that only about half of the public know that high levels of mercury are found in sharks and other pelagic top predators, as it accumulates in the food chain.

Species found at the fish market

Legislation in Taiwan prohibits finning and states that only the whole fish can be sold at markets. We did not come across any fins.

Imagine how many markets have these sharks for sale, across the world, every single night. The numbers are staggering.

Sharks are top predators, and the ecological pyramid would collapse without them. What will happen to an ocean void of sharks? According to Congratulafins,

You can read more about the famous case of Fishing Vessel Shuen De Ching No.888, punished for illegal finning back in 2015. There is a ccrossoverbetween the poor working conditions of fishermen and poor enforcement of fishing regulations in the industry. It is near impossible to tell whether fish have been harvested legally.

“A 2011 report from the UN Office of Drugs and Crime concluded that fishing vessels were readily used for smuggling illicit drugs and weapons. Fishing vessels were found to be well suited as mother ships and supply vessels, and several examples of trafficking were referred to.49 In 2015 more than US$11 million worth of amphetamines was found hidden in frozen tuna bellies in Kaohsiung, Taiwan.” – Greenpeace, Made in Taiwan.

All these issues need to be addressed. The future of the fishing industry and the survival of shark populations are both emotive, complex issues that need more consideration at legislative levels.

What can you do?

Yvette Bezuidenhout
Past life: scuba instructor. English teacher/ freediver. Author of Wayan and the Turtle King, a children's book on the effects of plastic on the marine environment.