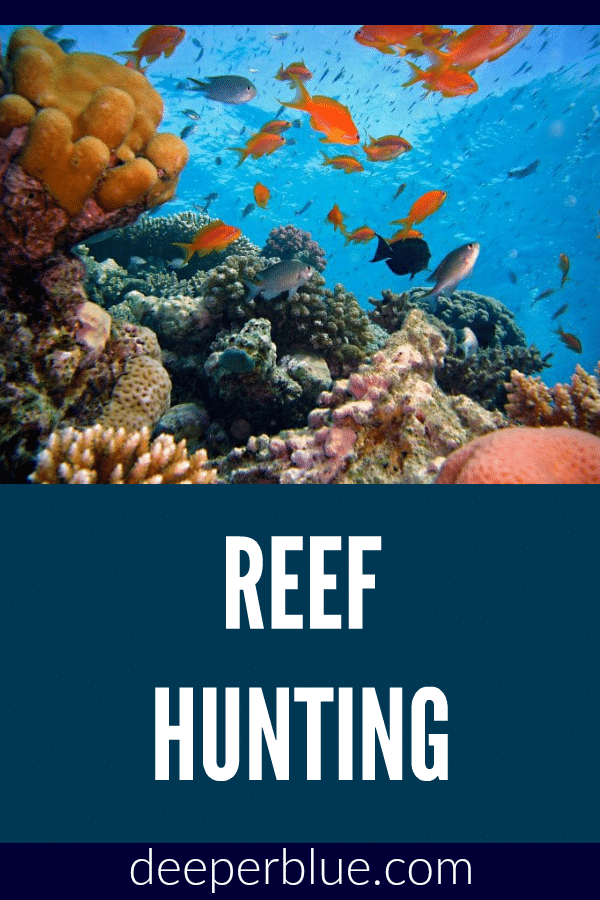 Coral reefs make up one of the largest fish habitat areas where spearos can hunt, so it’s fitting these fish are known as reef fish. Unlike pelagic or blue water fish, these fish live in or closely around the coral reef, it’s their home and when threatened it’s where they seek shelter.

Coral reefs vary quite a bit, from sheer walls starting in waters as shallow as 17 ft / 5 m and dropping off to depths of thousands of feet/meters, to limestone ledges which may resemble a street curb with reliefs of just 6 in / 15 cm. All of these structures, no matter how small, are ecosystems with huge varieties of life, which support the pray we seek. I remember diving on huge areas of low coral reef furrows in the Florida Keys, that resembled expansive fields of young tobacco plants, spread over hundreds of yards with copious amounts of tropical fish and bait, yet there were very few of the target species and none of a legal size. After searching several empty coral heads, I ran a compass grid search which eventually led me to the best section of the reef, which had some decent undercuts providing protection for bottom fish and spiny lobsters. Another reef hunting technique is to follow small pray, instead of shooting them, and let them take you home. This tactic has often brought me to trophy-sized fish! This method works well on the many low ledges of Florida’s west coast which parallel the coastline in short but broken up sections. Even though they have little growth, other than soft corals and sponges, they have low cuts and holes under the outcropping limestone ledge, and many quality fish will cross back and forth between the ledges separated by 50 or more yards/meters.

Another form of reefs are the artificial reefs created from many different materials, designed to attract reef fish. In other chapters, I’m going to talk about man-made structures such as shipwrecks, oil rigs, towers, and fish attraction devices (FADs), which generally attract more pelagic fish, which may cruise by coral reefs, but don’t usually stay on the reefs. The types of artificial structures that most resemble natural reefs are usually made from recycled concrete and steel and include storm drains, water pipes, bridge railings & slabs, light poles, I-beams, radio towers, army tanks, train boxcars and more. Some artificial reefs are constructed especially into modules, mostly of concrete, specifically designed to house certain sized reef fish. Most all these materials are arranged in piles and rows that create a low relief with sand avenues between them which most bottom fish like.

Since artificial reef locations are always published by the counties or states, the fish quickly become educated to spearos stalking them, so divers must learn the sites well to be successful hunters. Even in areas that only allow freediving while hunting, I often scuba dive with cameras for enjoyment, but pay attention to the structure and fish behavior and congregation patterns. Many years ago a bunch of railroad boxcars was placed on two published locations, in just over 100 ft / 30 m of water off of Bradenton, Florida, and after they had a few years growth on them, and had crumbled down a bit, they became fair hunting sites. I often drive my boat around, but well away from reef sites, especially artificial reefs, because some of them get placed by accident, fairly far off the target locations, and these lesser-known spots become great hunting sites! A couple years later I found a small area a quarter mile away from those boxcars that showed some fish. So we suited up and checked it out, finding two boxcars on the bottom with several 8 to 10-pound gag groupers, and one gag twice that size that took off immediately in a straight line from the boxcars. After swimming a hundred yards following his direction over nothing but sand, several big gag groupers came out to meet us, and my buddy and I each freeshafted 25-pounders. It turns out several boxcars were dumped in one pile, not upright and properly spaced like the two main sites, but landing on top of each another, crushing them down a lot, which the big gags loved!

If you know your prey, and you know their terrain, you’ll know what gear to bring. Most reef sites that are not walls, sinkholes or don’t have deep undercuts and honeycomb caverns, can be hunted with a freeshafts shot from guns or slings, which are faster and longer shooting than line shafts. Obviously, the shots need to be carefully chosen to seriously disable or stone the fish, but when this skill is mastered the results can be amazing. The fact that reef fish will rock up, even if they throw a shaft, means divers have a second shot possibility and bringing extra shafts and dive lights are recommended.

If the sites do have exceptional structural difficulties and added strong current issues, then long shooting enclosed lineshaft spearguns with sleek flopper shafts and extra band power are probably the best choice. Some of the new extended range Hawaiian slings, with attached lines, can reach out pretty far as well. Again divers should use shaft placement technique with these fast but thinner and more vulnerable shafts.

On coral or artificial reefs, sometimes smart bottom fish will come to you if you do the right things and don’t do the wrong things. Whether free or scuba diving, some divers can back-dive sites, a term meaning – to dive the same site others just dove – and still bring up very impressive pray, after the first divers on the site complained, “there’s no fish down there!” That ability has been called fish sense – it’s a combination of awareness and attitude, and it usually comes with experience. Or with some hunters, it never does. Being aware of water conditions on dives, visibility, temperature, current, bottom structure, depth, dim light or bright sunlight, bait fish, other pray, and other predators, and remembering all those conditions from previous dives, and their outcome, can make the difference between a hunter hitting a home run, or striking out. It’s how you feel in the water and how you react to the conditions, and fit in with the surrounding creatures – comfortable, relaxed and positive… verses awkward, jumpy and irritable.

Here are some things that can attract fish. Try creating a hot spot. Many times divers drop to the bottom and do not see any fish or action, even though the reef has excellent structure, tropicals, and baitfish. In this case, rather than spending your bottom time doing nothing, try throwing up some sand, or scratching a rock on the bottom, (not on coral), wait a bit then ascend a little bit and slowly turn around 360 degrees. If you have made a few dives or spent a few minutes on the bottom and still nothing works, consider shooting a fish to use for chum. Often the shot itself will start some action, bringing in curious fish, or causing a camouflaged fish to flinch. Fish sense the hunt, and if they are not the pray, they often come in to see if they can get something to eat. If your action does create a hot spot, stick around and work it for more fish. Look for hogfish or red grouper which forage on the bottom, and get higher up above the reef to see farther away and look for more predatory fish like snappers and black or gag groupers. If you shoot a fish, gut it and drop the stomach contents to chum other fish in. Remember what the fish ate as well and look for more of it. Burley a fish by making cuts along the body and then scrape the scales and pieces of meat-free to start a chum line drifting down current. You can do this from the boat as well, but the scraping sound of making the burley also draws the interest of fish and bait. The fish you burley doesn’t have to be fresh either because often an old, hot fish will have a strong scent that also attracts fish. Fish will see the chum twisting as it falls and flashing in the sunlight. Another thing that attracts fish are flashers, which can be man-made or store bought. Some flashers are dropped from the boat and hung from floats that unwrap to preset depths. Some are made to look like bait fish, and others are designed just to spin or bounce with wave action. I made my first flashers from old CDs and clear light test mono line with sinkers but they snarled up easily before use and horribly afterward. Thicker mono works much better as do smaller flashers, so my favorite flasher is a yellow canister float with everything rolled up inside. I can easily swim with it when I don’t deploy it, and when I chose to unscrew it and lower it to the right depth, the closed container becomes the float. The flasher drifts with the current so I can easily keep an eye on it, or tether it to a floatline / kayak line. Another kind of flasher is known as a throw flasher. These are useful to catch the attention of a far-away fish, by throwing a disposable slow sinking flasher near their path to catch their eye, and then throw others closer to bring them into you. The simplest are shiny, steel, round, roofing nail caps that are easy to throw, and will flip over continually, drawing in your pray. After they have done their job, they rust away pretty quick in the salt water. Throw away any that get wet, as they rust together and get dull.