My first real speargun was a Nemrod Torpedero pneumatic.  Someone gave it to me when I was a teenager and it looked like a ray gun.

Prior to that I had a small band gun which was useful for annoying carp.  Once shot they would bolt off into the distance, only to return abruptly and glare at me; “WTAF?” they seemed to say, now possibly missing a single scale.

Not so with the Torpedero.  It definitely had some issues, but at short range, it packed a punch.

So began my interest in pneumatic spearguns.

Possible Boredom Alert:  This section is a brief discussion of Pneumatic Spearguns – their virtues and vices and general considerations compared with band guns.  If you already know all this stuff, feel free to skip ahead.

Pneumatic spearguns work by using compressed air (and oil).  There is a piston in the barrel with seals to keep the air from escaping.  It slides between the trigger sear and a stop at the end of the barrel – using compressed air as a ‘spring’.  The guns are loaded by pushing the spear down into the barrel – further compressing the air in the gun and driving the piston down until it catches the sear. No air is lost when firing.

Legacy pneumatics fire a relatively short, thick, spear with a great deal of force.  Typically they have a lot of power at short ranges and generate that power in a small package relative to band guns.

A few innovations have evolved over the years.  One is that many guns now use a narrower piston and barrel.  13mm is the standard, but many use an 11mm piston.  The idea is that less surface area and volume (of water in the barrel) means the piston needs to push a smaller column of water down the barrel along with the spear.  Such guns shoot faster and use a lighter shaft  (6.5-7mm – as opposed to the traditional 8mm).  It’s a balance between velocity and momentum.

The next big innovation was a seal at the muzzle that makes the barrel airtight.  Airtight means no column of water – so the piston slides with much less resistance.  These ‘vacuum barrel’ guns shoot really fast and far and do it at lower pressure, making them easier to load.

In return for their excellent power/size ratio, there are some drawbacks.

Complexity and durability:  The basic idea of pneumatic spearguns is simple; sealed compressed air used as a spring.  The implementation involves making sure the o-rings and piston stay lubricated and intact, lest air begins to leak. Each seal is a potential point of failure.

Modern pneumatics also differ from past models in having polymer pistons.  While faster and lighter than metal pistons, they can crack – particularly at the higher velocities found in vacuum barrel models (most often this is caused by over-pressuring the gun).

Blue Water (aka, really big, hard, fish at longer ranges):  Because the shaft needs to be pushed down into the barrel to load the gun, reach and the tendency for longer shafts to flex are limiting factors in how long a pneumatic speargun can be.

Current pneumatics top out at just over a meter in length (The Salvimar Dark Side 99.9 model is 115cm, others as long a 130cm).   The video below is a range and penetration test for the Salvimar Predathor Vuoto (vacuum barrel pneumatic) 100 shooting an 8mm shaft at 24 bar.

Afforded a surplus of time by the pandemic to research and lust after random diving objects, I got on a bit of a jag looking at spearguns.

I’ve followed the evolution of Salvimar’s innovative and stylish offerings to the world of freediving and was intrigued when I happened upon their ‘Vuoto’ or vacuum barrel line of guns. They looked cool, and I’d never tried a vacuum pneumatic.  I thought it would be interesting to test one out.

Since it was close to the holiday season, I contacted Santa directly.  Much to my delight, he (aka Stephan Whelan, August Patriarch of DeeperBlue) put me in touch with Mark Labocetta of Maverick America.

I know Mark from when I covered the last Omer Hatteras Open for DeeperBlue.com – my first foray into the world of Blue Water diving.  At that time Mark was the US rep for Omer via his company Technosport.

Mark is a consummate spearo and a really nice guy who not only failed to mock me relentlessly but even tried to restore my machismo by telling me, as I lay on the deck between over-the-side heaves,  about all the other people who’d thrown up on his boat. (Point of Pride; of the 36 times I threw up on that first trip, I never once got any on the boat.) I recovered, and after a day off went on to experience one of the most incredible underwater environments I’ve ever seen.

Mark agreed to send me a sample of the top-of-the-line Salvimar Dark Side.  He suggested the Dark Side 99.9, but I asked for the smallest model – because I swim with a monofin and despise anything that messes with my streamline, and because I thought a small model would best demo the stunning length-to-range ratio these guns are reputed to have.

Solid. Really solid. And very light. Also extremely cool-looking. The carbon fiber barrel on this little ray gun makes it near neutral in the water.

I rigged it with 3 wraps of monofilament – which put the spear tip just over 3 meters (about 10’4″) from the end of the gun. I didn’t expect it to shoot that far but wanted to provide for the possibility.

I also wanted the test at factory pressure – 18 bar, so I didn’t add any air with the included pump – even though I expected the cold water might lower the pressure.

Thus equipped we sallied forth into the rapidly cooling late November waters of West Grand Traverse Bay (Northern Lower Michigan). Water and air were both 43f (6c) with sun and a brisk north wind. Visibility was fantastic – easily 60+ feet (around 20 meters).

The gun floats without the shaft (in freshwater no less!), and is barely negative with it in.(Check out the video below of a longer model levitating in saltwater)

Once loaded it is about 1/2″ (1.27cm) shorter than my arm from shoulder to middle fingertip. Swimming with my monofin I can hold the gun near the muzzle and it blends with my arm – creating pretty-much no drag at all.

With the grip nested in the crease of my hip, the gun was stable and comfortable during loading.  My suit is smooth-skin out and I had no concern about damaging it – which can be a problem with these suits and band guns.

Of Note: These vacuum barrel guns should NEVER be loaded out of the water.  Water helps lubricate the seal at the muzzle and dry loading can damage it.

The Dark Side pneumatics come with Salvimar’s “Race Kit” which includes a special piston, line release, and an adjustable trigger.

The trigger was pretty much transparent to me until I did a series of shots dedicated to testing it.  It’s the best I’ve encountered on a speargun – which is important because this small gun has so little mass that a bad trigger would make aiming much more difficult. The large trigger guard was an easy fit for my 5 mil 3-finger mitts.

This gun shoots extremely well.  Very fast, laser-accurate and solid right out to the end of the line. It’s also a lot of fun, between ease of loading and the sweet trigger we found ourselves in the water target shooting until we were shivering too hard to aim and our fingers stopped working.

For our tests, we used a 7×14 inch (18x35cm) piece of 1/4 inch (6.35mm) plywood suspended loosely in the water from some paracord attached to a weight.  The idea being that the small piece of plywood would move easily with the impact – making it harder to penetrate.

I expected a convincing dent at 8 feet or so but instead got the point well out the other side, embedded past the barb hinge.  Within about 6 feet (2m) it tended to blow through the board about 1/2 shaft length. Even at 10 feet (3m), it embedded until it ran out of line.  For the legal and edible species in this area, I’d be comfortable shooting out to about 9 feet (2.74m).

For heavier bodied or hard-scaled fish, the gun will accommodate an 8mm shaft and pressure up to 24 bar.

Pneumatics generally hold up well if they are not mistreated – and the Salvimar guns have a good reputation. But they do have more points of potential failure than band guns, so it’s good to have a reliable source for spare parts.

Mark suggested I check out Spearfishingworld for parts and repairs.  I’ve dealt with them over the years and their customer support is knowledgeable and friendly. On their site, I found everything from seal kits to pistons to muzzle seals to triggers, all very reasonably priced.  Salvimar has done a great job with logistics, and common repair items are readily available.

I ordered a set of three muzzle seals for around $18 USD and had them within three days. I’ve shot the gun a bunch and had no problems, but it seems reasonable to think of the seals like bands for band guns and keep a few around.  Changing them is extremely easy and, if your fingers aren’t frozen, could even be done in the water.

The Salvimar Dark Side pneumatic spearguns have a well-deserved rep for excellent ergonomics, outstanding performance, and quality. These Vacuum barrel guns shoot at higher velocities than conventional pneumatics, providing awesome range in a very compact and well-designed package.

This small model shoots extremely fast and far for its size and feels very natural in the hand. It’s the handiest and most fun speargun I’ve ever used.

The Dark Side guns are a little pricey. If the excellent balance offered by the carbon fiber barrel isn’t worth it to you (especially in a longer gun!), the Vuoto models offer the same performance at a lower price. 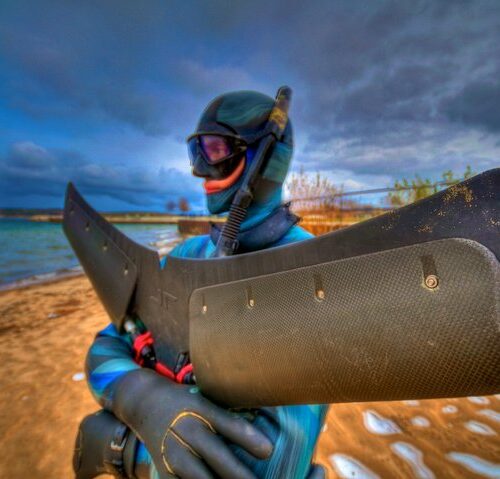