The safety diving team, were busy for weeks in advance. The prospect of a world record being set at a depth in excess of 90 meters meant that this was no mean feet for the safety team. Gas had to be organized; this had to be shipped from Germany to Cyprus and sofnalime was shipped from the UK for the rebreathers, additional equipment included lots of cylinders, regulators and much, much more! 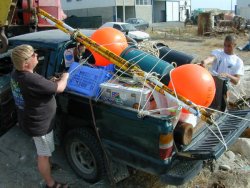 The safety team was managed by Steve Copeland, and his dive operation Deep Down diving was one of the sponsors of the event. Luckily, the team was blessed with some very experienced divers who brought a wide range of experience to the team, but those with less in-water experience were essential to the smooth running of the team.

Importantly, there was an initial safety briefing which explained procedures and methods that would be used by this new team of people! This was led by Steve and gave everyone an opportunity to meet and to find out how the system would work. Each evening there was a debrief about the days activities and discussion on how to improve the next days running schedule. The support team’s day started just after 5am with collection of the gas cylinders and departure to the barge and ended at about 8pm when the roster for the following day was complete.

With somewhere in the region of 130 competitors, the diving was very busy and required everyone to be comfortable with the tasks ahead and none of the saefty divers had the luxury of being late in or out of the water. The video was used to verify the freedive attemps, including the world record dives, which meant it wasn’t an option to arrive after the freedivers!

The team was broadly split into three groups, although there was considerable overlap at times. 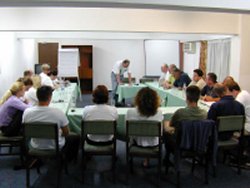 Deep Support covered depths between 95 meters and 50m, utilizing Open Circuit (OC) and Closed Circuit (CC) equipment configurations. The role the of deep support divers is to operate the video and provide safety cover for the freedivers. Each safety diver beyond 75 meters was also provided with their own safety diver. Whilst 75m is not necessarily an onerous task, the volume of freedivers making attempts beyond those depths required extended bottom times.

Shallow Support was conducted using OC equipment; the shallow divers were located between 18 meters and the surface and attended to divers on the decompression station. Available to get messages to the surface and provide much needed entertainment for long decompression hangs! A game of tennis using the two thoughtfully provided rackets and golf balls was a regular feature on the decompression station until the current dislodged one of the rackets, along with the most imaginative game of I-spy ever tried!

To avoid excessive decompression for the deep and intermediate divers, everyone had to be ready to descend and take over from the diver on the bottom before they were required to leave the bottom. The Dive Marshall’s role was to ensure that everyone was aware of the time they were required to leave the surface to achieve this. A backup diver was also always ready to enter the water, should the diver in their team ahead, have ear problems or something else which may cause them to abort the dive.

Additional gas was staged on the decompression station and at appropriate depths on the descent line in case of emergency. Luckily, none of this gas was used throughout the whole competition. This is quite an achievement, since over a hundred dives were conducted over the 3 days of competition and day of training, without incident.

For the deepest dive, I carried a stage cylinder of Trimix. I did this simply to avoid anyone else having to carry the cylinder and stage it – since I would be the only person at the bottom, it made little sense not to have it with me. There was a combination of other appropriate gases staged by my support divers as they reached their posts, which they then returned to the surface when I had ascended beyond the gas’ useful depth.

Along with gas for the rebreather divers, there was also additional gas for the OC circuit divers, including oxygen on the decompression stage. Some of the divers were also using surface supplied oxygen.
Special credit should go to the guys and girls that staged and retrieved the gas each day, this allowed the deep divers to descend much quicker and reduce their bottom times.

Elon Musk Wants You To Go ‘Scuba Diving On Mars’… Or Does He?