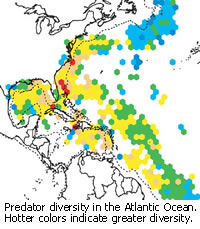 Large oceanic predators concentrate in "diversity hotspots" much like those that exist on land, according to new research done by the United States Academy of National Sicence.

Many of these predators, such as tunas, sharks, billfishes, and sea turtles, are vulnerable to overfishing, either as target catch or bycatch. Although terrestrial conservation efforts have focused on identifying and preserving concentrations of vulnerable species, little is known about similar hotspots for marine organisms.

To determine if oceanic hotspots exist, Boris Worm of the Institute for Marine Science and colleagues examined scientific observer records from long line fisheries in the Atlantic and Pacific Oceans. Long liners are the most widespread fishing vessels in the open ocean, and catch a variety of species by using a long fishing line fitted with hundreds of baited hooks.

The scientists found that species diversity peaks at distinct locations in intermediate latitudes (20-30 degrees North and South) where tropical and temperate species overlap. Individual hotspots are located close to prominent marine geographic features, such as reefs or shelf breaks, found near Florida, Hawaii, and Australia. Through modeling, the researchers predicted that protecting these hotspots from fishing would yield greater benefits for threatened species than protecting any other marine area.