A fatal shark attack in Fish Hoek, one of South Africa’s favourite holiday hotspots in Cape Town has prompted the closure of several beaches. Emergency workers have been searching for the body of Zimbabwean tourist Lloyd Skinner last seen Tuesday as the shark pulled him under.

The city banned swimming at closed beaches in the area, after the country’s second deadly shark attack in less than a month.  Eight sharks were seen near Fish Hoek at the weekend by Cape Town’s Shark Spotters service.  The beach has now been reopened, and swimmers have been advised to be cautious and stay together in groups.  Experts say the shark attack was a particularly rare occurrence, considering the relentless manner in which the animal apparently attacked the man.

Shark expert Ralph Collier was quoted in the Sphere reports as saying; “It appears he was hit very violently, with very high energy.  In this case, it seems the shark meant to disable or kill its prey on initial contact.” Any number of triggers could make a shark lash out in predatory attack, including a sense of danger or a perceived threat to its territory, according to scientists.

It is estimated that only 5 to 10 percent of shark attacks are predatory.  The KwaZulu-Natal Sharks Board has said that South Africa had six shark attacks last year of which four of them were fatal.

Local freediver and surfer Hanli Prinsloo has said in an interview with Deeperblue.com; “I spend a lot of time in the water around Cape Town surfing and freediving, and I am yet to see a Great White Shark.  Any death is an unfortunate event, but random and rare shark attacks are definitely not something that will keep me out the water! The sharks and the ocean users around here accept each other, and I am proud to live in a place where we don’t rely on murderous shark nets or brutal hunting of sharks.  Cape Town is a place of diverse and beautiful oceans from surfing to diving, kite surfing or snorkeling, our sharks is part of what makes our waters so unique”.

Local Capetonian 567 Cape Talk Radio Presenter Jeff Ayliffe said that “officials and media are once again desperately searching and demanding the answer to the attack, why it occurred, how it can be prevented in the future, but reality is, there are no answers and no guaranteed  preventions. As hard as it is to accept, there is almost certainly going to be more in the future. Scientists are continuing to learn more about the oceans most efficient predator, but in my modest opinion we are so far from understanding how and why they react with humans, simply because they are wild animals that have learnt to adapt with ruthless efficiency to any given situation.

Behaviour varies from no aggression in human company, to an exploratory bite, to a seemingly premeditated attack with the intent to feed, such as the 2 cases off Fish Hoek, and a case with a spear fisherman off Millers Point, where all resulted in the people being taken completely.

The stand-out feature that I have learnt about the GW from science is a massive intelligence. And the other thing is that if they are in hunting mode, and are required to approach prey hard and fast, they will do just that. No shark spotter or warning fin on the surface, and any sign of the attack will be available. Such is the domination of their environment, and their capacity to adapt and control it. And when we enter that environment, we need to understand that, and accept the possible consequences of our actions. It’s really that simple.” 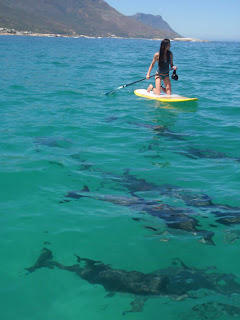