Cone shells (see picture), are among a favourite with beachcombers worldwide. I am not sure of how many people are aware of this, so I thought it would be interesting to write something about it. I am not fan of shell collectors, as shells are an important part of the coral reef ecosystem, even dead empty shells become a haven for hermit crabs. Let’s see how a shell collector can learn a nasty lesson:

Mary takes her 8-year-old daughter to the beach, and they decide to snorkel the house reef, which in some parts, is only 6 ft deep. Mary’s daughter can freedive to 10ft and is very comfortable in the water. They snorkel for over an hour, and the little girl is carrying a small goody bag on a float, to keep any treasures in that she may find. After a while she sees a beautiful cone shell lying on top of the reef. She ducks down to examine it, and picks it up and brings it to the surface to show her mother. A few minutes later she stop swimming, drops the shell, and she cannot move her arms. She cries out to her mother, and feels giddy, she can’t feel her mouth, her neck tingles and she starts to vomit. Mary senses that it would be related to something that she just picked up, and inspects her hands and arms. By this time, the daughter is extremely short of breath. It takes Mary 15 minutes to tow her daughter to the beach, where one passer by takes notice and runs to call the emergency services. By this time, the young girl is extremely distressed and needs assistance to breathe. 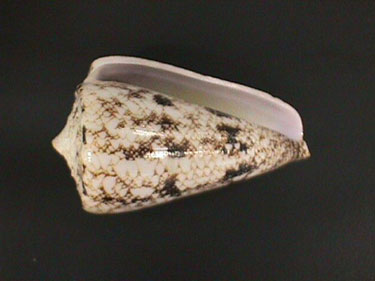 The cone shells are hunters by nature, many carry a toxic concoction which is capable of killing humans; in fact, the venom from one geographer cone (Conus geographus) is capable (in theory of course,) of killing 700 people.

Some feed on worms, some on molluscs (including other cone shells) and some on fish. Some cone shells are dangerous to human, being that to stop a fish in its tracks a snail needs formidably fast-acting venom. This venom can be fatal to humans.

It is thought that the cone detects its prey from chemicals in the water drawn through its siphon. Some visual sense may also be involved. The cone then extends its proboscis, a hollow feeding tube, on the end of which is a hollow, barbed tooth. Attached to a poison sac, this tooth is driven harpoon-style into the hapless victim; poison being injected through the tooth. Each tooth is used only once. A supply of spares is kept in an internal tooth sac and moved into position as required. Held by the barbed tooth, the victim is quickly immobilised by the poison and then drawn into the expanded proboscis to be digested.

If you are with someone that has been stung by a cone shell, immobilize the limb, wash the toxin out of the bite and apply a pressure dressing. Cleanse the wound and you may need to administer CPR or rescue breathing? so be prepared! You will see a small puncture wound, with localised ishemia and edema. The victim’s mouth and lips may also be numb. 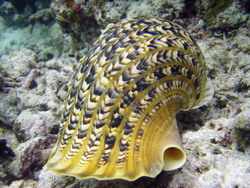 Cone shells have also some medical connotations. The venom has been purified, sequenced and synthesised with the extracted peptides shown to have great potential as highly selective pain-killing drugs. But I think we’ll leave that to the experts!