Sink Faze: Other Days The Bear Gets You

West Bay, Grand Cayman, BWI -  Another day, another World Record for the unstoppable Martin Stepanek. The Czech freediver has reclaimed the Free Immersion title with a 106m dive lasting 3’55”. With two more competition days remaining in the Performance Freediving Sink Faze 2006, Martin’s catch bag is well-stuffed, but by the same token he’s got two more opportunities to push the limits even farther.

How does he do it ? An on-board TV cameraman asked Martin what he’s doing when he goes off by himself before suiting up for a record attempt. 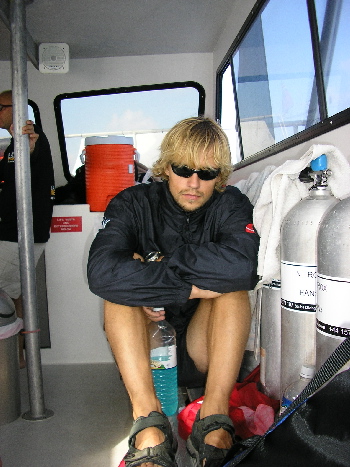 “Well”, replied Martin, “I relax myself right up to the point of falling asleep.”  That may help Martin hold his breath for 3’55", as he did on today’s dive while pulling himself down and up the height of a 35-story building. The cameraman left with something to think about.

Doc Lopez shouldn’t have dived today, and he realized this as he neared the bottom plate in an effort to break his own US National Free Immersion record set only 48 hours earlier. Doc targeted 54 meters for today’s attempt. As he descended through the 47 meter mark he heard the expected vocals from rebreather safety diver Bill Coltart, and glanced down ( Doc dives free immersion head-up) past his feet. “ I couldn’t see the bottom plate!” Doc recalls. “ Bill was calling to me as if the plate were right below me, like usual. But I couldn’t see it. It didn’t feel right, so I started back up.” 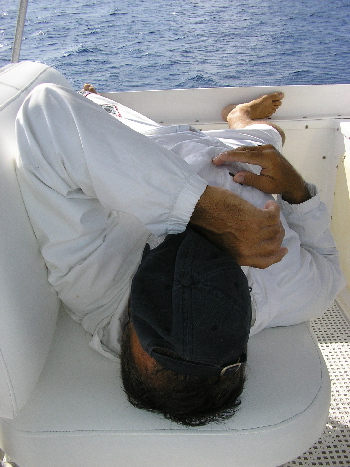 Ascending through the 15-meter level Doc realized he had two more competition days ahead of him and made the conservative call. He signaled to safety freedivers Kirk Krack and Tom Lightfoot, who immediately laid hands on Doc and raised him to the surface.  A slightly inglorious way to make it home, but by saving his strength for another day Doc has clearly signaled his intent to try again.

The emerging drama of Sink Faze 2006 is now centered about Mandy-Rae Cruickshank, the only team member not to have achieved at least one record objective. Today was another in a string of intermittent disappointments. Mandy’s scheduled 84m Constant Ballast training dive went wrong when her right ear wedged a few meters above the plate and she was forced to turn back. 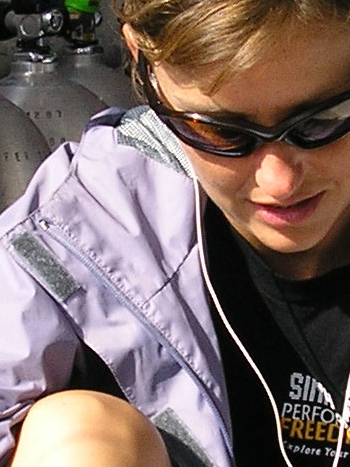 Today’s setback and those preceding it are daunting, to say the least. Mandy-Rae, however, is a consummate competitor, a true iron lady, and her quiet resolve was written all over her on the ride back to shore. This is an athlete with the will to overcome, and the character to enforce that will under any and all circumstances.