West Bay, Grand Cayman BWI – That’s all she wrote, people. Sink Faze 2006 is a wrap. The Performance Freediving Team has added two World records and two National records to the trophy case, and tasted a little drop of the bitters as well.

Martin Stepanek tucked away a pair of World records, in the Constant Ballast and Free Immersion disciplines. This is even more remarkable than it seems at first blush given the mask-flooding he contended with on the 108- meter CB dive. He made a game try at the 110-meter mark, but this time his mask completely flooded and he turned back at 104.

Mandy and Doc each tucked away a National record, Mandy-Rae in Constant Ballast for Canada, and the good Doctor in Free Immersion for the USA. Doc didn’t quite manage to crank it up another notch to 53 meters, and Mandy missed her World record by the skinny part of a silkworm’s hair.

When you push and push, it’s only natural that the disappointments come at the end, and even though we’re all adults here we are subject to a kind of recency effect. The thing that happened last gets remembered with a vividness all out of proportion to its significance. Folks – each of these athletes scored and scored big. 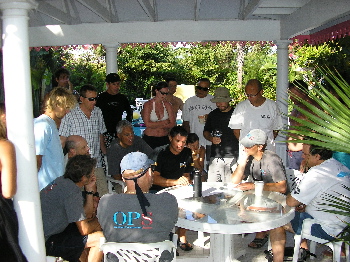 The wrap party, Friday night, was a little subdued in comparison with previous years. Maybe it’s because we’re all a little older, maybe it’s because the sport has matured and so has its culture. In any case, I can report that this party, a lovely gathering on the pool court of the Coconut Bay condominium, was… reportable. Nothing happened that cannot be recounted in this family magazine. Old friends, new friends, water people all.

Sink Faze 2006 was another milestone for our sport. The appearance of two of the three major US broadcast television networks, and the coverage they broadcast to tens of millions of viewers took our audience to a new level. Katy Couric, hostess of the NBC Today show whose crew covered the event, has since announced her move to the coveted, top-of-the-profession anchor chair at CBS. This means, well, 33% of America’s top TV newspeople will be a freediving fan.

The wrap party reminded me a lot of the poolside soiree in the cinematic life aquatic, The Big Blue. Okay, no tuxedos and no piano, but a similar atmosphere. So – life imitating art imitating life ? Nah – the real thing was a thousand times better. The cast and crew gathered for that party were, by that time, a well-oiled machine, working and problem-solving together on instinct and familiarity. To give our readers a sense of what and who it took to put three freedivers in the water for record dives, here are the core crew of Sink Faze 2006:

The Divetech Boat Captain – Captain of the spectator boat.

My tearful apologies to anybody I’ve overlooked, particularly to the Divetech spectator boat captain, whose orbit never intersected mine. 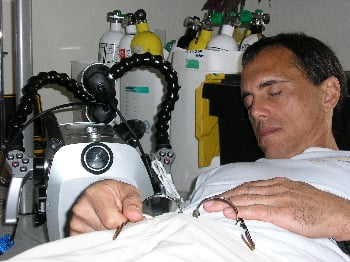 Many of these folks were on Cayman for last year’s event, and I predict most will be ready to come back again next year, in spite of working their fingers to the bone for no pay and footing their own travel bills. We’re all tired, now, very tired.