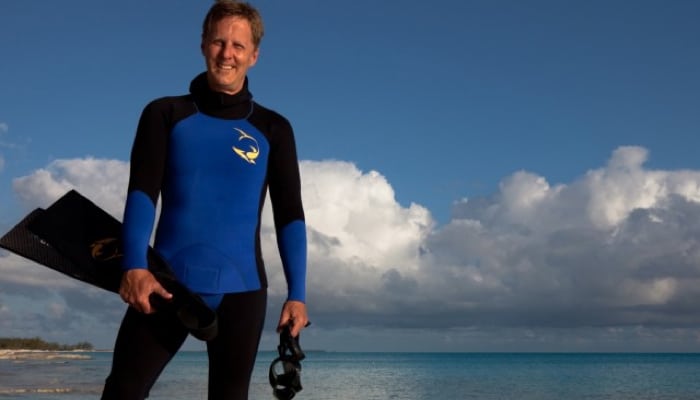 Several months ago  William Winram set a new world record in the freediving discipline of Variable Weight (VWT) – watch the video of his 145 meter record-setting sled dive below.

Since then he’s been quite busy promoting shark conservation in general, and an IMAX film, Great White Sharks, which seeks to do the same by revealing the majesty, beauty and true nature of an apex predator whose reputation has otherwise been both maligned and horribly distorted in the media. Recently named as the new IUCN Ocean Ambassador,  Winram generously took some time between his hectic travels abroad to answer a few questions and share his perspective. 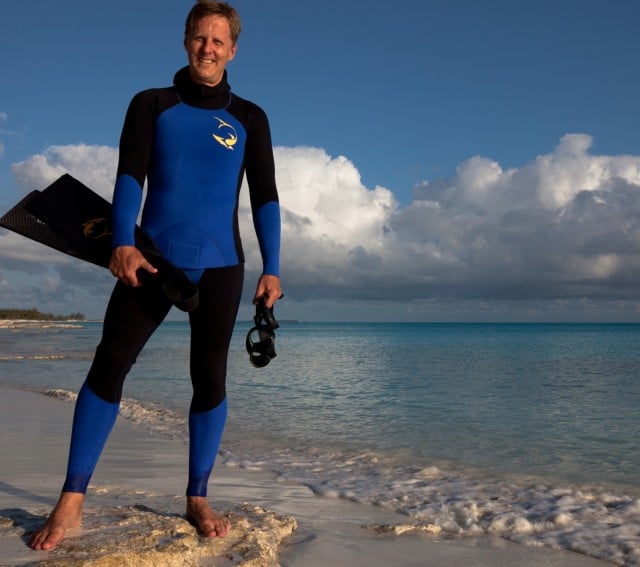 FRANCESCA KOE: How were you introduced to the sport of freediving?
WILLIAM WINRAM: By my father. He was a scuba/freediving instructor (back in the day you had to learn to freedive before scuba) and he did search & rescue for the coast guards. My brother and I used to wait on the pool deck when dad was teaching and if we behaved we would get to hold onto his neck one at a time and he would swim dynamic under the water…my mom would follow on deck and when we could not go any further we would let go and pop up and she would grab us. From there, he taught us our skills and we progressed into the ocean.

FK: Your business moniker says “Shark Publicist” – why sharks? why not dolphins or whales?
WW: Firstly, because I am drawn to sharks and have been fascinated by them since I was a toddler. Secondly, sharks have been exploited by the media for decades, portrayed as these mindless killing machines which, as you know, they are not. They are, however, extremely important to the health of the marine ecosystem and as long as people view them negatively it will be hard to engage people to protect and conserve them.

FK: You collaborate frequently with Fred Buyle – how does that dynamic work?
WW: The dynamic works very naturally. Fred and I have an ease in the water and work really well together. We trust each others’ skill in the water and knowledge of the creatures we are interacting with – this is important when diving with great white sharks and other apex predators and especially when we are tagging them. I do have to say though, Fred is a photographer and when I want to photograph him interacting with sharks, he does not make it easy for me! He really does not care to be captured in a photo but he really does want to capture the most amazing images… I have yet to figure out how to catch him doing his art in a way that would do justice to the amazing images he creates. As someone who he has photographed extensively, I know I just need to get near the subject and the rest will be taken care of.

FK: When did you take your first serious sled dive? Where were you and what was that experience like?
WW: Depends what you think of as a “serious” sled dive… If I remember correctly the first time I dove on a sled was in Egypt in 2007. I loved it, loved the ease of arriving at depth and the ride back was great. Back then, I saw it as a great training tool in and of itself but not as a discipline I would see setting world records in, mostly because of the challenges I had equalizing. There was a fair amount of information I needed to process the first time, breaking/stopping the sled, filling the lift bag, etc, and that was best served with shallow dives to get the hang of it. Even so, those shallow dives were great fun and great preparation for deeper dives later.

FK: 145 meters is pretty darned deep! What is the greatest misconception about sled diving?
WW: The silliest thing I have heard is that “sled is bad for the sport, sled is too dangerous…” Really? At the world championships in 2011 there were numerous bad lung squeezes by athletes competing in all self-propelled disciplines. At one point, there was no oxygen left because there were so many athletes who had squeezed. In the sport, we have seen people over packing air into their lungs during static training that have had serious repercussions. The Sled is not inherently dangerous. It is humans who push their own bodies to the point of excess. As far as deep diving is concerned, it seems we have growing pains within the sport as people push to go deeper and deeper without having the proper time to allow their bodies to acclimatize to depth. If we look at the accidents that have taken place within the sled category you usually find that there was some kind of error during the dive – too fast an ascent rate for example – that contributed to the problem – i.e. diver error. 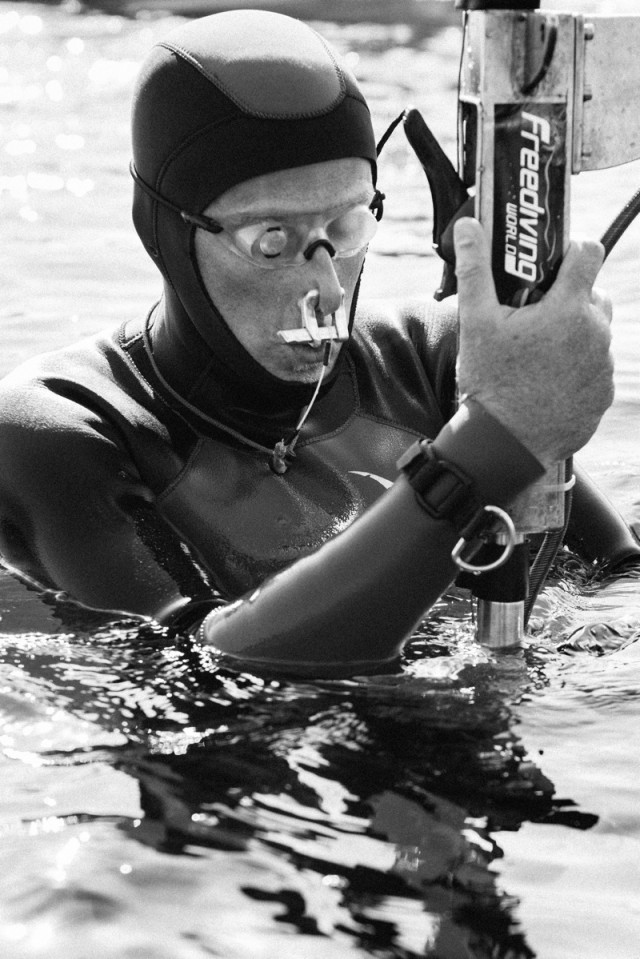 FK: What is your training regimen?
WW: My training regime is varied. For dry training, I practice chi gong, nei gong, yoga, breathing, meditation, pilates, core strength
exercises. Wet training can be swimming, apnea both in the pool and at depth…my training is contingent on having time to train which is challenging with the current schedule I have.

FK: Your shark work and your freediving take you to many exotic locations around the globe. What are some of your favorites?
WW: There really are too many places to list and so many I would like to dive but have not had the time for, but here is a short list:  1) Guadalupe island for the great white sharks and the general feel of the place; 2) Malpelo island – another amazing place to dive and so much life to see and interact with; 3) The Revillagigedo islands for the same reason as Malpelo island…

FK:  So where is your favorite place to dive?
WW: Planet Earth!

FK: You recently became an SSI instructor – what was the motivation for working with SSI?
WW: SSI was filling a gap that was lacking in other systems. In particular insurance and course materials.

FK: Who do you think is the most exciting, up and coming freediver?
WW: I cannot really put my finger on any one person but I can say what I like about the sport is that people will come from left field and pull off amazing and unexpected performances. I think we will continue to see more and more new and talented people.

FK: Who has inspired you the most?
WW: There is no one person that has inspired me more than others but instead there are always new and inspiring people as life progresses. I guess anyone who does their best, perseveres and overcomes adversity is inspiring. Of late, Luke Cresswell and Steve McNicholas come to mind.

FK: If you had the chance to have a dinner party with anyone in the world – who would you invite and why?
WW: How about just dinner with anyone!?  I have a rather long list but one of the names on that list was Sylvia Earle and happily I can now cross that one name off  as I was lucky enough to have dinner with her twice at the 3rd International Marine Protected Areas Congress in Marseille in October 2013.

FK: What is your favorite food?
WW: Most food 🙂 I am not sure there is one food that I can single out, I just love eating good food!

FK: What do you take with you no matter where you go?
WW: Music and Movies!

The women of Fourth Element get personal with the Size Matters campaign, donning their own kit and stepping in front of the lens to help customers find the best fit.
Read more
Freediving

The online Kumbhaka Festival scheduled for this weekend will be featuring a number of freedivers talking about some of the techniques they use to dive deep.
Read more