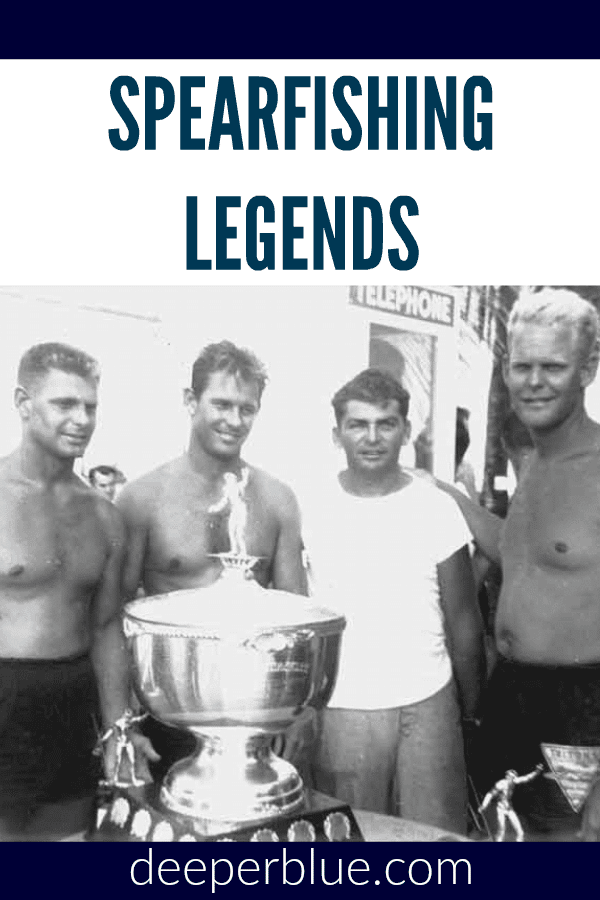 Look up Legendary in Webster’s dictionary and it reads

Example of Legendary in a sentence: “Legendary creatures from the sea.”

“The best spearfishermen in the U.S. are three brothers named Pinder and their cousin Charley. They’re so good that people compare them with creatures of the sea.”

The Pinder brothers, from Miami FL, were on the Sports Illustrated cover, something no other spearfishermen have ever done. They always shot primitive slings, while other spearfishermen used more powerful, triggered spearguns. Art, Don and Fred Pinder were coming off their US Nationals Championship team win in Key West, Florida, where Don also won the 1st place individually. Art had just won the Athlete of the Year Award the year before in California. The Pinder brothers had won every competition they entered for 9 years running, but due to politics with the Nationals directors, this was their last competition together. In 1948 Art stoned an Atlantic Sailfish over 7-foot long and weighing 56 pounds, and newspapers printed the photo all over the country. In 1954 it became one of Skin Diver Magazines most popular covers. The next year Don speared an 804-pound Jewfish which is a Guinness Book World Record for the largest fish of any species.  Both these fish are still IUSA World Records.

Don Delmonico, from Miami FL, a US Nationals individual and team Champion from 1959, his son Dan, and Art Pinder teamed up in 1983 for one last Nationals competition. The three slingers again out-shot all the speargun teams for first place team, and Don won his second individual championship at age 49, while Art was 54. Don also won the Athlete of the Year Award in 1962. Don Delmonico became second the America to win a World Spearfishing Championship individual, with 3rd place in Italy, 1960. Don won World Team Championships in 1959, 1960 & 1961.

Terry Lentz, from California, is the only America to ever win the World Spearfishing Championship, 1st place individual, which was in Malta in 1959. His 2 biggest groupers, were 47lbs and 35lbs, which put him above the Spanish and Italian Champions. With his teammates Don Delmonico and Del Wren, they won America’s first team World Championship, 3rd place. Terry also won the Athlete of the Year Award in 1959 and was on the cover of Skin Diver Magazine in 1959. Terry, Don, and Del won 3rd place team World Championship again in 1960.  Terry Lentz won the US National Championship individual 3 times in 1960, 1961 and 1965, and the Team Championship in 1961.

Del Wren, from California, won the Athlete of the Year Award in 1958, and the Nationals 1st place team. He was also on the cover of Skin Diver Magazine in 1958.
Del Wren had only one leg, but he never let that stop him from winning State, National and World Championships.

Big Jim also won the Athlete of the Year Award in 1957. He was the first US Team Coach in the Worlds in 1959, 1960 & 1961. Jim designed many spearfishing products and scuba diving gear. He was one of the early pioneers of scuba diving and one of the founders of Scubapro. Jim received distinguished service awards from the USOA and PADI.

Gary Keffler was the 2nd American to win a World Spearfishing Championship individual, taking 2nd in Brazil in 1963. He also was on the 4th World Championship team winning 3rd place. He was a commercial diver in Washington State and became the founder of the largest chain of dive stores in the Northwestern US.

Terry Maas, from California, won his first US National Spearfishing Championship individual in 1966. In 1973 he joined the Ernst brother’s team and won the National Championship individual again in 1976, 1978 & 1982, and 3 team National Championships. In 1975 & 1983 he won the World Spearing Championship team, both 2nd place. Terry won Athlete of the Year in 1975, and speared a World Record 398lbs / 180.5kg Pacific bluefin tuna in 1982 that was not beat until 2006. In 1995, Terry published his first book, BlueWater Hunting and Freediving, which became an all-time best seller. An accomplished videographer, Terry produced “Bluewater Hunter” for PBS and videoed “Speargun Hunter” a documentary and TV show, which he co-hosted. Terry is the developer of the Freedive Recovery Vest.

Dennis Haussler, from Redwood City, CA. has won 4 National Spearfishing Championship 1st individuals and 4 1st team awards, in 2000, 2007, 2009 & 2010. Dennis won the Athlete of the Year Award in 2000. He is currently the Director of Spearfishing for the USOA.

Sheri Daye, of Boca Raton, Florida won the National Spearfishing Championship mixed team in 2004 with teammate Daryl Wong. Sheri became the first woman ever to win 1st place overall, beating all the best spearfishermen in the Southeast US, in the 1985 Spearboard Open, a huge Spearfishing Championship. She also won the Spearfishing Magazine “Spearo of the Year Award” that year. Sheri won the US National Spearfishing Championship women’s 1st individual in 2006. She holds over 20 IUSA World Spearfishing Records. She was co-host of the “Speargun Hunter” documentary and TV show on the Outdoor Channel. In 2006 she founded The Blue Wild Ocean Adventure Expo in Fort Lauderdale, Florida. The Blue Wild is an annual spearfishing, diving, marine art, and watersport show/expo, which has become the largest diving consumer show in the Southeast US. April 14 & 15, in 2018,

Anne Doherty from Rhode Island, won the US National Spearfishing Championship women’s individuals & teams in 1998, 2003, & 2009. She also placed 5th in the men’s division in 2005. In 2009, Anne became the first woman to win the Athlete of the Year Award. She is the first woman diver to win any of the North Atlantic Open meets and won the 2013 North Atlantic Champion. She is a women’s world record holder for Striped Bass and Bluefish.