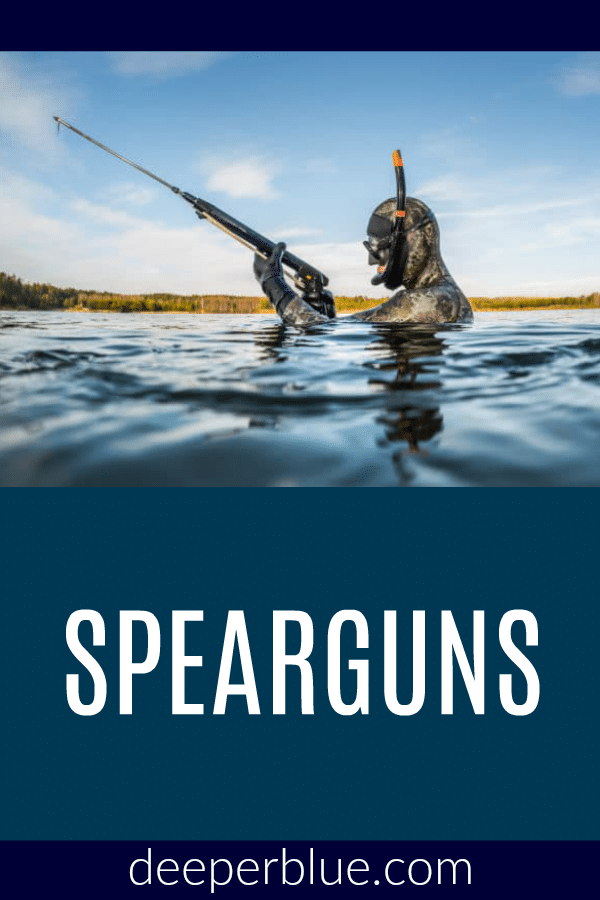 Spearguns are the most advanced types of spearfishing equipment available today and have been for more than half a century. They have several advantages over polespears and slings, most notable is the trigger which holds the power of the preloaded shaft, allowing the diver to be more relaxed and ready to take the shot when it develops. Spearguns can also be far more accurate than other spearing devices due to their increased power and design affording better aiming.

Most spearguns also have a shooting line attached to the shaft, which is wrapped once or twice under or along-side the barrel. The line is released by the trigger so that the shaft will have minimal drag when fired, and the diver does not have to manage the line before the shot. Spearguns typically come rigged with a short bungee cord and clip between the shooting line and the gun muzzle but can be rigged with reels of float lines, depending on the type of prey the diver might be hunting. Spearguns, like Hawaiian slings, can also shoot a free shaft, without lines, like an archer shooting a bow with an untethered arrow. Some spearos even use spearguns with 2 to 3 spears, allowing multiple shots.

Spearguns from as early as the 1950’s might have been powered by rubber bands, but they might also have been powered by compressed air cylinders or ammunition shells. As the sport matured it became clear that ethically guns needed to be powered only by the diver’s muscle power, which is also much quieter than other power devices, so they were better for stalking spooky fish.

Today most spearguns are powered by the diver stretching rubber bands of various lengths from the barrel to the notches or fins at the base of the spear shaft. Some pneumatic or air powered spearguns are still in use, but they are not expelling air like early compressed air guns, but rather are loaded by the diver pulling the shaft down the barrel compressing an air chamber which will throw the spear shaft quickly and quietly when triggered.

The most commonly made mistake by beginning spearfishers is to buy a short inexpensive speargun, without considering the waters they will be hunting in and the type of fish they will target. Fortunately, there are a good number of dive stores with knowledgeable instructors that can help novices select the best choice for the above-mentioned criteria, and still meet their budget.

Speargun sizes can be confusing because there is no standard way to state the size of the gun, so many guns that are called the same length in inches or centimeters will often not have the same power and range. That said I’ll describe them here as approximate lengths.

A short speargun could be a good choice for a diver looking to shoot small fish like lionfish or sheepshead in very limited visibility. Small spearguns also work well shooting small to medium fish that rock up in reefs. The shortest gun I’ve ever seen is 11 in./30 cm long with a 9.5 in./ 24 cm shaft, which will only shoot about 30” or 3 times the spear length. Many divers find a short polespear to be better for dirty water and small fish, and they are usually far less costly. Quality short spearguns do range from about 18 in./ 45 cm up to about 36 in./ 90 cm and some of the best short guns are pneumatics. Pneumatics are usually well made but generally do require more maintenance than band guns. Another issue with a Pneumatic speargun is that it is always loaded if the spear is in the gun, and therefore it must have the shaft and line removed, unlike band guns that still contain and hold the spear and line while unloaded. I have seen many divers break the primary safety rule by bringing loaded pneumatic guns near other divers, aboard boats, and even carried in to dive stores.

Medium sized guns start at about 38 in./96cm and range up to about 44 in./110cm. These spearguns are particularly good for reef spearing because they can maneuver well in moderately tight terrain and yet can shoot with moderate power and range. These guns work well for shooting medium reef or bottom fish like hogfish, mangrove snapper, and red groupers.

Long spearguns begin at about 46 in./115 cm and run up to about 55 in./140 cm. These guns can reach smart fast reef fish like mutton snapper and gag or black grouper, as well as moderately large pelagic fish like cobia, jacks, mahi-mahi, and wahoo. I call this last group of fish “bluewater-light.”

Extra Long spearguns are from about 57 in./145 cm to about 67 in./170 cm. These guns are used mostly for serious blue water hunting for tuna, wahoo, big jacks, etc.

The reason gun sizes can be deceiving is due to speargun styles. The different designs change the gun stock lengths, spear lengths, and band lengths.

Euro or rail gun style tend to be thin stock, rear handle guns, often made of aluminum and carbon tubes and measured in centimeters. They can be made of wood but are usually thin, horizontally cut and are often chest loaders. Euro spearfishing has been mostly for smaller skittish fish while freediving, so they maneuver very well, usually have rear handles and thin flopper shafts for long reach. Pneumatic guns roughly fit the Euro style but load uniquely from the hip or from the foot.

American style guns are often heavier-duty wood or thicker tubes and may have mid-handles, rear-plus handles or rear handles. American spearfishing is often for bigger fish, scuba or freediving, and they may be hip loaders or chest loaders. Shafts are generally thicker, and maybe flopper style or threaded with heavy-duty slip tips. American guns in the higher price range are often ballasted to reduce recoil or kick, and now commonly use enclosed tracks to stop shaft whip when extra power is added. The largest of these guns are often used for bluewater hunting in far-away places around the world.

Hybrid guns are blending the two styles with wooden rear stocks and carbon front tubes. Euros are also made in South Africa, Australia, the USA, and other non-Euro countries. Some Euros now have enclosed tracks as well. Custom gun companies usually make models with new ideas, many USA custom companies are found in Hawaii, Florida, and California and more and more are becoming production companies as the sport has grown.

Roller spearguns are not a new idea, as they date back to custom models as old as 1949 and a production version from 1984. What’s new is that in approximately the last 4 years many roller gun models have made it to the market and are selling, whereas the predecessors all failed. Today the technology is far more advanced and able to produce the parts to improve the designs and make them affordable. Roller gun conversion kits are also available and selling. Roller spearguns increase the band pull from the notch or fin at the back of the spear all the way to the muzzle by going around rollers mounted on the sides of the muzzle and back down to one or more attach points on the underside of the barrel. This can greatly increase power and range or can make the gun easier to load without a large loss of power. Another benefit is that the rubber is not only moving forward with the shaft but also moving the opposite direction on the underside of the gun, which reduces the recoil or kick common with traditional spearguns. The best roller guns available today also have many of the other top features of previous gun models, such as enclosed tracks, to keep the shaft tracking accurately with the increased power, fin-shafts and Dyneema or spectra wishbones on the bands for quieting metal to metal noise, and sleek barrels for reducing drag and providing easy maneuverability. The guns with variable rubber attach points on the underside of the barrel are also important to make the gun have the most power and also to reduce loading effort. Some of the roller guns do not have these features and some are also quite bulky. Many of the roller gun kits are also lacking the afore-mentioned features. Recently a roller sling and a roller polespear have shown up on the market!

It is a good idea to think ahead about what kind of spearfishing you want to do and where you want to do it. It’s very common to pick up a second or third speargun that is either longer or shorter and more suitable to diverse spearfishing styles and destinations. No one speargun can be the best for all conditions and all fish.

As mentioned in previous chapters for poles and slings, you can’t practice loading real spearguns on land. With all the proper accessory equipment, such as a loading pad, gloves and plenty of unoccupied space, you can practice a 90% test load, but not actually engage the shaft. The only reason to attempt this would be to find out if you can load the power load you have chosen, before going diving. I have miscalculated proper band size in the past because I thought I could load any band on any gun. I did load a 24” x ¾” band on a 54“ Seahornet speargun on a dive with gag grouper all around, but only got it loaded one time. It turned out that a 26” x ¾” band was a perfect size. (My only consolation was that I was the only one who ever loaded it. Adrenaline!)