At theme parks, they line up to watch dolphins leap through hoops and do pirouettes in the air. They ride out to sea on tourist boats, applauding as the animals frolic above the waves. And the most devout dolphin fans pay good money to swim alongside the agile creatures in giant pools or in their natural habitat. 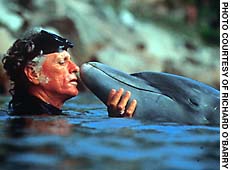 Adoration for what is widely considered the world’s most adorable creature comes as little surprise. What catches even well-informed Japanese off-guard, though, is Japan’s other relationship with dolphins — not as spectator and performer, but as hunter and prey.

Japanese kill almost 20,000 dolphins every year for food. (Though it is difficult to compare Japanese demand for dolphin meat with other consumer countries, Japanese are likely the largest overall buyers of cetacean — or whale and dolphin — meat, according to officials at the agriculture ministry.)

The custom, which may date back further than Japan’s centuries-old whaling tradition, is nowadays only a tiny niche market. Nonetheless, in recent years it has attracted growing attention amid criticism from animal-rights activists at home and abroad.

The annual hunting season began on Sept. 1, and will end on March 31. Slaughter takes two basic forms. At sea, workers pierce the animals with harpoons and haul them aboard their ships with hooks. In a less common practice called "drive fishing," small fleets of boats drive pods of the mammals up on beaches — sometimes dozens at a time — and either stab them in the brain or cut their throats.

The meat of an ishiiruka, or Dall’s porpoise, fetches about 20,000 yen. The flesh is boiled in a stew or made into jerky, while the heart is often eaten raw.

Though government officials and industry groups adamantly defend dolphin hunting — calling it an inherent part of Japanese culture — there are Japanese who insist it’s time for change.

"Killing dolphins is simply outdated," said Izumi Ishii, a sunburned 54-year-old fisherman who, after hunting dolphins for decades, finally called it quits in 1996 and became a leading campaigner for the protection of dolphins.

Ishii acknowledged that dolphins were once an important source of protein in resource-poor Japan, but contends that that is no longer the case. "There are so many other things to eat nowadays."

Ishii said he loved dolphins even as a toddler, but as the son of a dolphin hunter it was a natural choice, at first, to engage in the trade himself.

The yearly slaughter, however, finally became unbearable to him. The dolphins, blood spurting from their throats, took as long as six minutes to die. "They cry," he said. "They thrash about with their eyes wide open."

But Ishii has to make a living. So a year ago this month, he started shuttling tourists out to sea to watch dolphins in the wild, a business he says earns him far more than the 10,000 yen a day he once earned hunting the animals. Ishii is marking his enterprise’s first anniversary with a series of speeches and briefings for the press aimed at increasing awareness about dolphin hunting.

Ironically, Japanese demand for dolphin meat — highest among fishing-community old-timers — at first rose after whale meat went off the market as a result of the country’s 1988 enforcement of the International Whaling Commission moratorium, say experts.

In principle, though, the official stance is that eating dolphins is as acceptable as eating cows or pigs.

"Japan is surrounded by ocean, so we have the right to use ocean resources to live, if this causes no scientific problems," said Takanori Nagatomo, chief of the pelagic — or open-sea — whaling section at the agriculture ministry in Tokyo.

It’s a point on which critics, particularly foreign ones, disagree. Perhaps the most outspoken is Richard O’Barry, 63, an American who captured and trained the dolphins used in the 1960s hit television series "Flipper" — before becoming a celebrity animal-rights activist.

O’Barry, who is now visiting Japan to support Ishii’s campaign, argues that dolphins possess "self-awareness" similar to humans and other primates, and thus should be spared death by the blade. Government data, he said, miss the point. "It’s not a question of science. It’s a question of ethics," he stated.

Activists say they oppose not only the slaughter of dolphins, but their captivity at theme parks and aquariums as well. During a drive-fishing hunt, a select few dolphins are routinely spared for shipment to aquariums. About 80 percent of these survivors, said O’Barry, are young females chosen for breeding.

But, according to activists, living in a tank causes severe psychological stress in dolphins, as the walls of the pools make a confusing jumble of their navigational sonar. O’Barry also criticized dolphin-assisted therapy, in which captive dolphins are used to help human patients overcome autism or other disorders. "There’s no scientific, empirical evidence that dolphins can heal us. They can’t heal themselves. It’s bogus," said O’Barry.

For now, activists appear to have made only a little headway in their campaign to spare dolphins from human interference. Though dolphin hunting in Ishii’s hometown of Futo, Shizuoka Prefecture, has dropped to zero, that could be explained by the dolphins’ migration patterns rather than any reluctance among fishermen. Hunting in other areas, meanwhile, seems likely to continue for the time being at current levels, Ishii said.

All the same, Ishii has some cause to be optimistic. For one, a fellow villager has offered to support his dolphin-watching business. When too many tourists sign up for Ishii’s boat, the friend ferries the extra passengers on his own vessel. Other locals, though wary of his newfangled venture, are also offering moral support. And most of the hunters are now approaching retirement, with few youngsters willing to follow in their path.

"In the past, Japanese killed dolphins, but that era is over," he says, with a smile. "The new tradition will be of friendship between the species."