For those new to technical diving, you will not remember when the original Tek Show began. In 1993, Michael Menduno (publisher of the now defunct Aqua Corps magazine) created the Tek Show. It was slated prior to DEMA each year. It ran for four years until Michael was unable to continue offering the show. This year saw the beginning of a new era for the Tek Show. Ten years after its humble beginnings, the show is back.

Much like the first Tek Show in 1993, this year’s Tek Show was small but solid. A dozen venders and over one hundred participants gathered to discuss and debate technical diving topics. Unlike 1993, this year’s show did not see the wild controversy and lively debates of its earlier cousin. Each day saw three open forum topics presented on different topics with additional smaller break out sessions each morning confined to decompression software theory and diving with sharks. 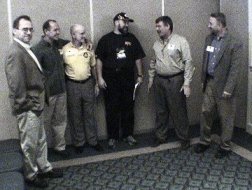 For all of you who know Joe Odom, you missed his usual no holds barred comments. The more select of these was the reference to animal husbandry or some derivative there of.

The entire group agreed that training was critical in all aspects of technical diving. The instructor is more important than the particular training agency. All the panels felt that there is a growing movement to race to depth or exceed experience and training in all the areas of the sport. Cautionary tales of too much too fast were leveled on the audience related to all the tech disciplines. References to all of the pioneers that have come before and have been lost stood as examples of how even those who are considered the best can error. The record is laced with bodies. The overriding message is that if the top guys can die, so can you. So, whatever you do make sure you do it well.

Jeff Bozanic related that from the accident files he maintains it appears that most of the accidents and/or fatalities with trained technical divers appear to be people pushing their training, experience and capability limits well beyond what they could handle.

All of the panels agreed that technology exists that would allow people to put themselves in places that they were not ready for or worse incapable of returning from. Joe Odom summarized the idea by saying, ‘Just because you can cut a table for the dive, if you cannot hold a decompression stop, you should not do the dive regardless of what you think you can do.”

Clearly, the message is that execution of all diving requirements and procedures is more important than the number that ends up on your depth gauge. Another clear message is that training should arm divers with the ability to do things on the bottom.Getting through a dive is not enough. These operational issues should be second nature before certification is awarded.

Much of the controversy of the earlier shows was just gone. There appears to be a basic community standard that has developed. It is not down to which hose is breathed from or whether a wing is for diving or bondage, but rather that divers should be redundant, yet streamlined and carry only what they need. After ten years of debate we should hope that some common ground has been found and it has. 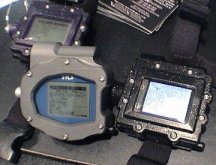 The small group of vendors had some new toys on display. Kevin Gurr had a new color dive computer called the VR2. We finally have underwater Gameboy for deco. Yeah! He also had a new rebreather on display. It is in the style of the Mk 16 with modern upgrades in design, electronics and function. 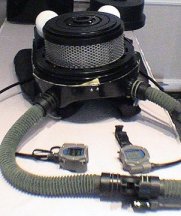 Named the Ouroboros, Celtic for infinite loop, it is a back mounted split counter lung computer controlled mixed gas closed circuit rebreather. He has redesigned the annual axial canister of the Mk 16 for a radial flow one. A digital secondary reads sensor output independent of the electronics with battery backup. Electronics are digital with a true voting logic. He has incorporated his VR3 dive computer into the unit. The unit has the capability of telemetry to the surface. He plans to have it independently tested by the German Navy in November. Should be interesting to see how the unit develops. He currently has six units diving. 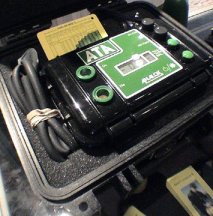 The helium analyzer is here to stay. This takes the guesswork out of trimix blending. It very well could make for significant savings by allowing topping off to mixes after a dive instead of dumping gas to start from scratch. Trimix blenders have been reluctant to top mixes more than once in the past for fear of errors building up over successive fills. Now you know exactly what you have at all times. Dive Rite released the first unit over a year ago. Analox and Abyss both had new units on display at the show. Both are delivering units currently. They both retail for under $1,000.00 US. 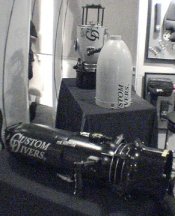 Custom Divers had a new DPV on display that incorporates digital electronics and smart motors. Inspiration was displaying with US vendor Silent Diving Systems. Several other vendors, along with the training agencies displayed their wares.

What was conspicuous was the lack of all the players in the technical diving community. None of the mainstream training agencies that have technical diving programs as well as several other players and venders chose to participate in the event. By design or by accident, this was a glaring void to the proceedings. For the event to be useful to the technical community and the end user, it must involve all of the players. It appears that next year will be different. Both PADI and NAUI have committed to participate. Hopefully, most of the others who chose not to attend this year will next year.

Overall, the new Tek Show was a success. Much like the first year of the show in 1993, this year’s show was small and well attended for its first year. The community needs a venue for people to discuss issues face to face. If next year proceeds in the same manner as the 1994 Tek Show did to build on the success of its first year, the community should have a great beginning to build a stronger voice in the industry. All those who are active in the industry or want to learn more about technical diving should plan on attending next year’s event.