DEMA revealed manufacturers new and improved tech products; proved that manufacturers want your technical diving dollars and are prepared to go to great lengths to astound and innovate to grab your attention.

Rebreathers that were promised have started to appear, with presence from all of the established rebreather manufacturers. Some of whom had interesting additions to their current product ranges. 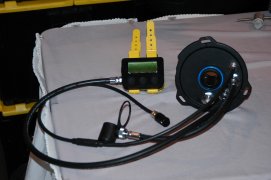 New this year was Ambient Pressure’s Evolution rebreather. A “mini-me” of the Inspiration with second generation electronics. The size has been reduced of the entire unit at the cost of the cylinder size, now 2 liter instead of 3 and the scrubber duration, now 2 hours instead of 3! The electronics are impressive and were working at the show, this is now a single, stream lined wrist unit able to show both the master and slave readings. The wrist unit also shows the mV readings of the cells and an optional temperature sensor in the scrubber to indicate duration. With full Trimix decompression software added to the system, this is a significant change to the electronics sold with the Inspiration. Other interesting features included a heads-up display which also vibrates, mounted on the mouth piece is felt like noone could ignore that alarm.

The Ouroboros, also from the UK, was on display at the Delta-P booth. Another electronically controlled rebreather, this has a whopping 11 hour (predicted) scrubber duration and some very impressive electronics. This unit also sports a heads-up (vibrating) display, but has a cleverly placed PO2 display in the back of the case for buddies/instructors on ability of a fourth cell for integration of a computer such as the Abyss Explorer or the VR3 (also from Delta-P). The unit will go for CE testing in the UK in the Winter 2003/ Spring 2004.

Jetsam Technologies had their new has booster pumps on show, which generated a huge amount of interest. They are compact, easy to maintain and reasonably priced.

The KISS rebreather available from Jetsam was also on display, along with other accessories that have been developed as add-ons to the unit.

The Megalodon was available to see this year. It has neoprene counterlungs and is electronically controlled. The scrubber housing has four snap clips which are very easy to remove. The master power switches reside in the housed scrubber, which mans that they will not be switched off by accident – assuming you remember to switch them on! The unit also promises to have a decompression computer in the future.

One manufacturer was not even prepared to show their rebreather for fear that their ideas may be copied before they are ready for production. Although they seemed confident that it was nothing like any rebreathers at the show this year!!!

Another gadget from Delta-P was the VR2 computer, a pared down version of the VR3, which is moulded from plastic (a nice glitter effect) and is a nitrox only computer. This computer has a colour screen, useful for games! Good news for people who are easily bored underwater!

Custom Divers had on show their new underwater scooter, which is very solidly built and is available with 3 adjustable speeds in small medium and large. The units are easy to maintain, charge and “drive” to a maximum of 33kg of thrust. LEDs show battery state of the service free lead-acid batteries.

Farallon, from Canada were showing their scooters, too. These units, with progressive acceleration are light and reasonably priced. Constructed of aluminium they have a range of about 3 miles (depending on the size chosen and other factors – diver size etc). 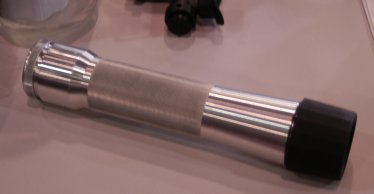 Sartek had a new prototype HID light and a fantastic LED light, which would be ideal for a backup. With an extraordinary burn time on regular batteries, it would also be very suitable in remote locations for reliability reasons.

To name but a few, Danny Crowell – owner and skipper of the “Seeker”, famed for its Andrea Doria trips. Tom and Patti Mount, as always, representing IANTD. Kevin Gurr who organized the 1998 HMS Britannic trip. The show was well attended by well-known Technical Divers, often representing their favourite products or their own companies. This year was a very successful show for technical divers to attend – and there lies the challenge for next year.